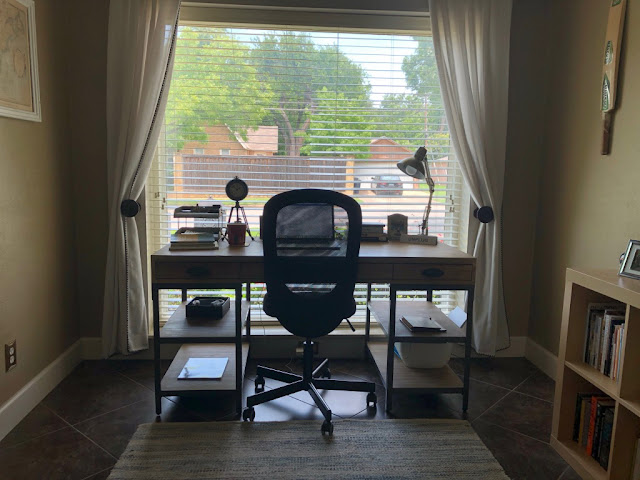 As an academic, husband, father and runner, I don’t have the luxury of a typical writing day. My days are long and busy during the academic year, which runs from late August until early May. I finally have time to write during the three-month summer break, as well as during our month-long winter break. People outside academe might find it strange that I teach literature and creative writing, but rarely have time to write, or read for pleasure. It’s certainly ironic. Fellow academics, unless they are fortunate enough to have a light teaching load and/or teaching and research assistants, will understand exactly why there is little time during the semester to write – teaching, preparation, grading, meetings and email quickly fill the long weekdays and parts of the weekend. One of my colleagues gets up at 4am every day to write, but I clearly need more sleep than he does! So, during the semester, writing takes place during brief (and sometimes unexpected) downtimes, such as while my students are working on an in-class writing exercise, while students take an exam, a rare Friday morning when I’m caught up on grading, or on a flight home from a conference.
Although I don’t have a scheduled writing time, let alone a whole day, I still manage to write dozens of poems per year, along with essays, academic articles, book reviews and conference papers. I’ve written, edited and co-edited nine published books over the past nine years, and my tenth is currently awaiting a decision re publication. My productivity is certainly not the result of regular writing days or sticking to a strict schedule, but due to the fact that I am always thinking about writing, usually have multiple projects in various stages of production, and write whenever I get the chance. Even when I’m not at my desk, I’m composing. I’ve run six marathons during the past four years, and many of the hundreds of hours spent training have also been hours spent composing poems and arguments for essays and thinking about what I would put on the page once I got back to my desk. My preferred location for writing is the desk in my study at home, overlooking a tree-lined street of 1930s brick houses, two blocks from campus. However, I’ll write anywhere, and have composed on trains, busses, trams, ferries and planes, as well as in cafes, bars, libraries and classrooms, in open fields, on mountainsides and beaches.
Since I am currently on my summer break, I have a lot of writing time. I spent the last two weeks of May writing a 6000-word essay on Australian suburban literature for The Routledge Companion to Australian Literature. I’ve spent all this week writing and revising an essay about language, landscape and migration in my poetry for Ireland’s Skylight 47 poetry journal. Today I sat down at my desk before 8am and worked on some essay revisions before driving my daughter to Film Camp, then stopped at the coffee shop for a take-away latte before heading back to my desk. I spent half the morning revising and cutting the essay, since I was well over the word limit that I had been assigned. By 11am I was happy enough with the current draft of my essay to email it to my editor in Galway, which was extremely satisfying. I turned my attention to writing poetry between 11am and noon, rewriting and revising a poem that I began during a workshop taught by Irish poet Annemarie Ní Churreáin at the Doolin Writers Weekend in January. Coincidentally, while working on the poem I received an email from Annemarie regarding her visit to Fort Worth in September for a reading as part of TCU’s Live Oak Reading Series.
I had lunch and a chat with my better half, and was back at my desk by 12:30. I eased back into work mode by checking Twitter and Facebook, which led me to watch a video of Metallica covering “Whiskey in the Jar” at their Slane Castle concert on June 8th. I’ve never been more than a casual fan of Metallica, but thoroughly enjoyed their version of the Irish classic folk song and felt ready to create again. I returned to the poem I’d been working on before lunch, reworking the stanza structures, line breaks and some of the diction, consulted Google maps and satellite images to check some details of the poem’s setting in two of my childhood hometowns in Australia, then composed a title I’m happy with. I re-read the poem several times, checked my email again, then read the poem one last time. Satisfied, I moved it from the “Poems in Progress” folder to “Poems to be Submitted” folder, where it will rest for a while. 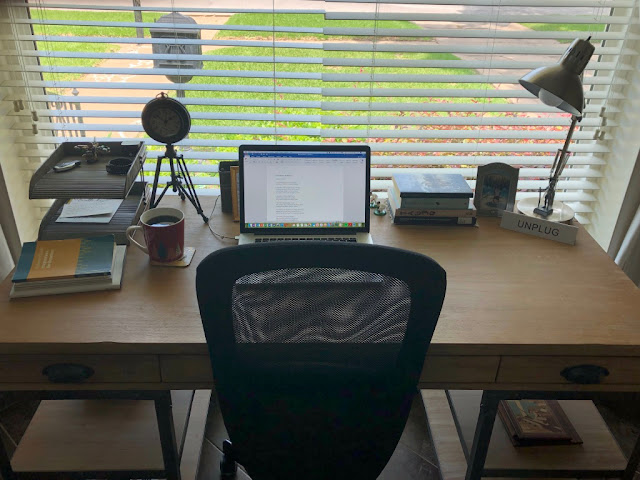 Having completed an essay and a poem before 1:30pm, I felt pretty pleased with my writing day so far and brewed my afternoon coffee. Once it was ready, I treated myself to a piece of chocolate and returned to my desk to write this post. Before starting, I returned to the my (small press) writing day site and read posts by Erin Russell and Claire Trevien to get me in the mindset. I wrote the first few paragraphs, then my wife stopped in to give me some news about a new Chinese translation of her book The CIA in Hollywood: How The Agency Shapes Film and Television, which was great, but then I was out of the writing zone, so I got up and walked around the house a bit to reboot. Once back at my desk, I checked my email again – this time there was another message from Annemarie, providing her flight details for her September visit and some ideas for a poetry reading in Dublin. Soon after, the sound of a beautiful voice singing caused me to look out the window, where I saw a young Beyoncé lookalike wearing a yellow backpack walking past while singing like a Broadway star. And then an unseen worker at a nearby house under renovation started up an angle-grinder, which changed the mood completely. Just a minute later, a Volvo sedan was pulled over across the street from my study window by a Fort Worth police SUV, and not one, but two officers approached the vehicle, one on either side. The officers checked the driver’s license and insurance papers, which they took back to their vehicle and spent several minutes examining, presumably checking info on their laptop, before returning the paperwork to the young female driver and letting her off without a ticket. All very exciting. Possibly material for a future poem.
Like many writers, I believe that reading frequently and widely is crucial for anyone who wants to write. I try and read at least fifty-two books per year. Lately I’ve been reading a combination of poetry, fiction and literary criticism, including Sally Rooney’s much-hyped Normal People, which provided an interesting contemporary exploration of romantic relationships and friendships amongst teens and young adults in Ireland; Another Last Day, the latest poetry collection from Alex Lemon, one of the best living poets in America - my assessment of his brilliance has nothing to do with the fact that he is my friend and colleague and we live on the same street – seriously, if you’ve never read Alex Lemon’s poetry, buy one of his books and see for yourself. I also recently read Brigid Rooney’s Suburban Space, The Novel and Australian Modernity, which I was especially interested in because it is just the second book-length study of Australian suburban literature, and I happened to write the first, Exploring Suburbia: The Suburbs in the Contemporary Australian Novel. Rooney’s book is thoroughly-researched, insightful, fascinating and tremendously useful for students and scholars of Australian literature. She’s built upon my work and written a better book than I did, which is really gratifying. Tom Lee’s Coach Fitz is my favourite of the new novels I’ve read this year. It’s mostly set in Sydney and focuses on running, suburbia, architecture, philosophy, relationships with mentors and foodie culture. If you’re familiar with the great Australian fiction writer Gerald Murnane, imagine if he wrote a novel with a narrator in his early twenties who loved running, suburbia, bread and olive oil. I loved everything about the book.
I’m currently reading Paul Kane’s latest poetry collection, A Passing Bell: Ghazals for Tina. The 133 ghazals are addressed to Paul’s late wife Tina, who became ill with the motor neuron disease ALS in 2013 and died suddenly during a trip to their second home in Australia in 2015. I am fortunate to have known Paul for sixteen years and to have met Tina numerous times. Paul writes brilliantly about Tina, their thirty-five-year marriage, and his grief. I can only read a few pages of the book at a time because the poems are so powerful. I’ve also started reading Taboo, the latest novel by award-winning Indigenous Australian novelist Kim Scott, who I had the honour of hearing read at the American Association of Australasian Literary Studies’ annual conference in Fairbanks, Alaska, in April this year. Kim is a brilliant writer, a powerful reader of his own work, and a lovely bloke; I feel really honoured to have met him and got to know him a little over a few Alaskan brews. He’s certainly one of the most impressive people I’ve met in my lifetime.
I’ve read interviews with (or articles about) many writers who claim that they write for about four hours per day – I know that Charles Dickens followed this model, as does Peter Carey. A typical schedule seems to be four intense, highly-focused hours of writing in the morning, followed by lunch (maybe with a glass of wine or two), then perhaps a long walk or a nap, and maybe some revisions in the afternoon. I’ve put in about seven hours and am just about to finish my third writing project for the day, so I consider that a successful, atypical writing day.

Nathanael O’Reilly is an Irish-Australian residing in Texas; he teaches creative writing and Australian, British, Irish and Postcolonial literature at TCU in Fort Worth. He is the author of Preparations for Departure (UWAP Poetry, 2017), named one of the “2017 Books of the Year” in Australian Book Review; Distance (Picaro Press, 2014; Ginninderra Press, 2015); and the chapbooks Cult (Ginninderra Press, 2016), Suburban Exile (Picaro Press, 2011) and Symptoms of Homesickness (Picaro Press, 2010). His poems have appeared in journals and anthologies in twelve countries, and he has given invited readings in Australia, Canada, England, Hungary, Ireland and the United States.