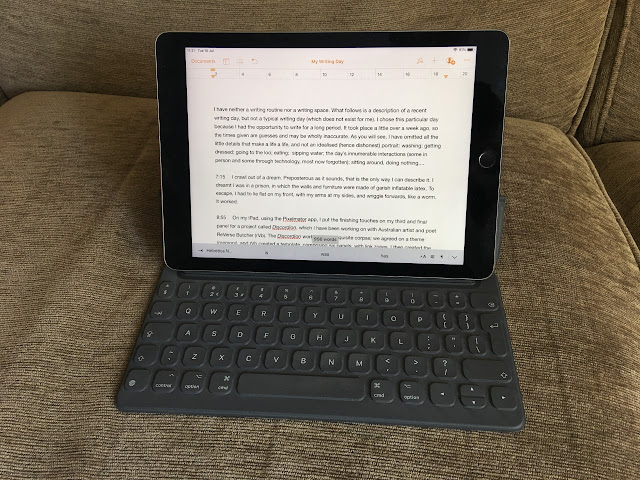 I have neither a writing routine nor a writing space. What follows is a description of a recent writing day, but not a typical writing day (which does not exist for me). I chose this particular day because I had the opportunity to write for a long period. It took place a little over a week ago, so the times given are guesses and may be wholly inaccurate. As you will see, I have omitted all the little details that make a life a life, and not an idealised (hence dishonest) portrait: washing; getting dressed; going to the loo; eating;  sipping water; the day’s innumerable interactions (some in person and some through technology, most now forgotten); sitting around, doing nothing....

7:15   I crawl out of a dream. Preposterous as it sounds, that is the only way I can describe it. I dreamt I was in a prison, in which the walls and furniture were made of garish inflatable latex. To escape, I had to lie flat on my front, with my arms at my sides, and wriggle forwards, like a worm. It worked.

8:55   On my iPad, using the Pixelmator app, I put the finishing touches on my third and final panel for a project called Discordion, which I have been working on with Australian artist and poet ReVerse Butcher (rVb). The Discordion works like an exquisite corpse; we agreed on a theme (memory), and rVb created a template, comprising six panels, with link zones. I then created the first panel (essentially a heavily manipulated digital photomontage with text) and emailed the link section to rVb, who used that as a starting point for the second panel, and so on. Apart from the link sections, neither of us has seen the other’s work, so when the Discordion is complete, it will be a wonderful surprise for us both!

10:09  Thanks to my email Sent box, I am confident that 10:09 was the exact time that I emailed my final Discordion link zone to rVb.

There followed a couple of hours in which nothing of note took place.

Back to the present tense!

12:30  I return to my current project, a long visual poem called Machine. The central architecture of the poem was constructed some weeks ago, and then I had taken a break from it. Now, I continue building. Like Void Voices (my reimagining of Dante’s Inferno), Machine is a polyphonic piece, depending for its effect on the jarring juxtapositions of contrasting voices. Writing has always felt like an act of ventriloquism, in which I am the dummy and the voices come through me from elsewhere; I know exactly what Igor Stravinsky meant when he said, “I was the conduit through which The Rite of Spring passed.” I love listening to the voices and transcribing them. The more banal, the better: I find more poetry in our hackneyed formulations than in the souvenir-shop artifice of lyric poems, particularly when those hackneyed formulations are repeated, mutated, atomised and reconstructed. That said, Machine does contain lyrical moments, all of which were the product of aleatory writing techniques. The main stylistic difference between the poem and Void Voices is that where the latter was overwhelmingly chaotic and messy (as it absolutely had to be), Machine is much more terse and lean, its structures more apparent.

At 12:51 (thank you, Inbox) I receive an email from poet and Hesterglock Press publisher Paul Hawkins about the launch event for SJ Fowler’s Unfinished Memmoirs of a Hypocrit, in London on 25th July. Several Hesterglock authors will be there, reading their work. Paul’s email outlines a few practical bits and pieces, and sets out the running order. We each have a five-minute slot, so I’ll have to think carefully about what to read; it will certainly be an excerpt from Void Voices, but how deep into Hell do I want to go? Plenty to think about.

Back to Machine for a few hours, and then I am spent.

Most evenings, I read poetry, not because I am clever (I am not), but because I do not usually have the attention span for a novel, and poetry provides more instant gratification than a long narrative. At any one time, I will have several books on the go, and I may dip into two or three in an evening. Tonight, it’s just one book: Paul Nougé’s Au palais des images les spectres sont rois. Nougé was one of the finest poets associated with Surrealism in Belgium, and his writing was quite distinct from that of his Parisian comrades. The writings of the likes of André Breton, Louis Aragon and René Char were often highly portentous and rhetorical, and Breton in particular (in his theoretical work) often dressed up quite thin ideas in the most ludicrously impenetrable literary convolutions. There is none of that in Nougé; his work is rigorous and challenging, but there is a simplicity and daring in his work that I admire. When writing poems, he never attempted to be poetic. His words are disarmingly vital and dynamic. Tonight, I read a sequence of visual poems in which the language of advertising has been appropriated and subverted. Nougé is certainly one of my biggest influences.

11:30  I slide into a dream, in which I am an orangutan trying to pass himself off as a fox. It is very stressful.

James Knight is an experimental poet and digital artist, whose work has appeared recently in Fur Lined Ghettos, The Interpreter’s House, and (in Spanish), in Luvina, the literary magazine of the University of Guadalajara, Mexico. Void Voices, his reimagining of Dante’s Inferno, was published by Hesterglock Press in 2018. Website: thebirdking.com. Twitter: @badbadpoet.