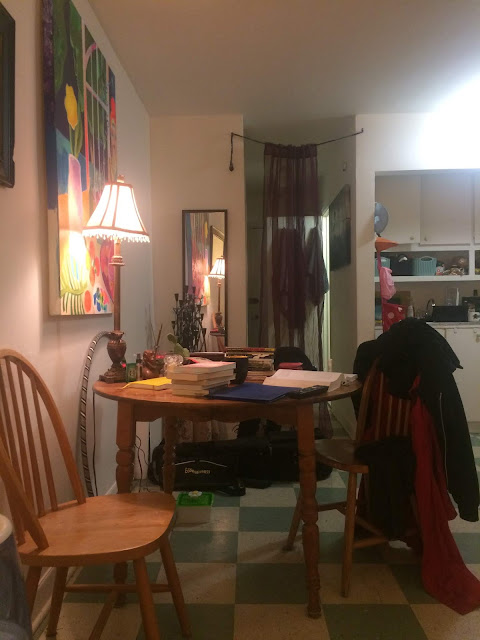 Been up half the night trying to find the tri-force shards in The Legend of Zelda: The Wind Waker, which I’m playing for the umpteenth time. Comfort gaming, you could say. I sleep until noon when the cat jumps on my chest, all 13 pounds of her, little stick paws digging painfully into my ribs. She is rewarded with treats.

I dump some coffee in the French press. Put the kettle on the stove. Wash my face. Check email. Chat for a few hours with writer friends about the rise of fascism, some new Netflix shows and how we’re all supposed to be meeting deadlines but most of us aren’t. At three, when the pre-packaged noodle thing that will be my breakfast is almost done cooking, I realize I’m out of butter and it’s just not gonna taste right.

Spend a few hours reading new books and manuscripts. I make notes about the style, the winning sentences, the sheer genius, but I won’t pass it along, not all of it, or folks will think I’m strange. I’m so proud of people who are writing, I can’t even take it.

I fancy a trip to the park across the street with a pen and a notebook and whatever book I’m into but now it’s already six and I’m hungry again. By the time I grab a shower and get supper on the go it’s seven and by the time I’m recovered from all of that it’s eight and the sun is setting and it’s time to get stuff done for real.

I write some dialogue for the play I’m working on, speaking each line out loud, getting all worked up over the lack of rhythm. I’ll probably delete half of it later. No—I definitely will. But every worthy line is a step closer to making deadline.

The novel is still sitting in disconnected bunches but I write more, and this bit is far outside of where I’ve been heading. Every time I look at it, I’m struck with a thousand ideas, too much to fit on any page. But maybe I catch a good idea about a character or a scene and so the day has meaning, after all.

Someone has asked me to meet them somewhere but I make some kind of excuse. I’m already powering down. Some silly TV show grabs my attention for an hour, then I thumb through a short story collection. The cat goes out, the cat comes in. I get a cold glass of milk from the fridge. I start thinking about milk and milking machines and how husbands drink their wives’ breast milk and then I write a short piece of what I’d like to call nonfiction but that actually may qualify as reverse sexism, if that’s even a thing. I save it on the hard drive with the other stuff that will never see the light of day and I’m reminded what a mess of stuff I have on the computer and I say to myself for the hundredth time that I need some kind of filing system.

No time for that now. It’s midnight. My eyes are strained from all the screens. And Ganon is waiting and he doesn’t deserve to be out there living it up and making Link feel like such a loser. Not after all Link has been through. I boil the kettle. I charge up the controller. I press play.

Tracey Waddleton is from Trepassey, Newfoundland. Her stories were shortlisted for the NLCU Fresh Fish Award for Emerging Writers and have been published in Riddle Fence, The Telegram, NQ, Paragon 6 and several volumes of the Cuffer Anthology. In 2015, she received the Lawrence Jackson Writers’ Award for the manuscript of Send More Tourists… the Last Ones Were Delicious. Waddleton lives and writes in Montréal, Quebec.