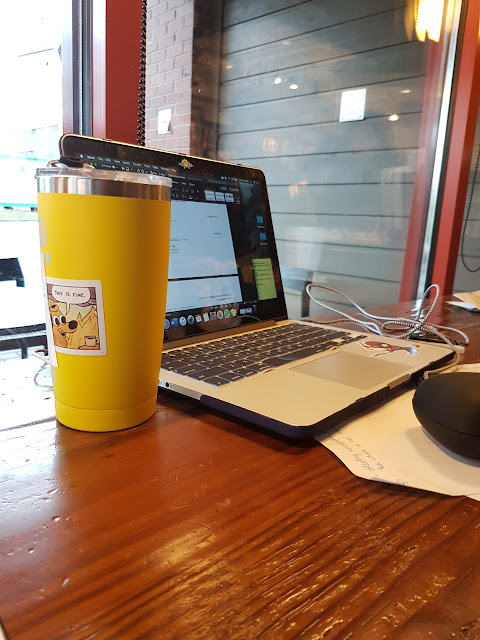 One of the things I love most about writing is borrowing—what it feels like to take an idea that already exists, hold it up to the light, and see how it might shimmer differently in my hands. I like writing “after” poems; I leap at the chance to talk about process and the people, places and things that inspire my work. All this to say that my entryway to this piece was the (small press) writing day stories of Manahil Bandukwala and Natasha Ramoutar, who explain beautifully what it’s like to write “in the interim, in transit, during the spaces in between.”

I wrapped up my final semester of university last month, and my marketing internship at a local tech firm ended earlier this week. When I was in school and working, I rarely had writing days. Like Manahil and Natasha, I would write and edit on the bus, the SkyTrain, in class when I was bored. I have a file saved in Evernote called “notatio,” after a writing technique Anakana Schofield taught me, where I jot down ideas for poems and lines that I like but don’t have a home for yet. These range from “the gravity of love,” a phrase I added while sobbing my way through the Mister Rogers documentary Won’t You Be My Neighbor, to “play this at my wedding,” a months-old declaration of unknown origin. Most of my poems are born out of this collection of musings.

Today, I open my notatio, scroll through it quickly, and close it again.

The spaces in between. With university finally over and the “real world” looming ahead of me, it feels like I’m sitting at the intermission of my life, waiting for the next act to start, terrified of what it might bring. I told myself over and over again this past year that I “didn’t have time to write,” which wasn’t true, but it was a believable excuse. Well, I don’t have excuses anymore. Not even fake ones. 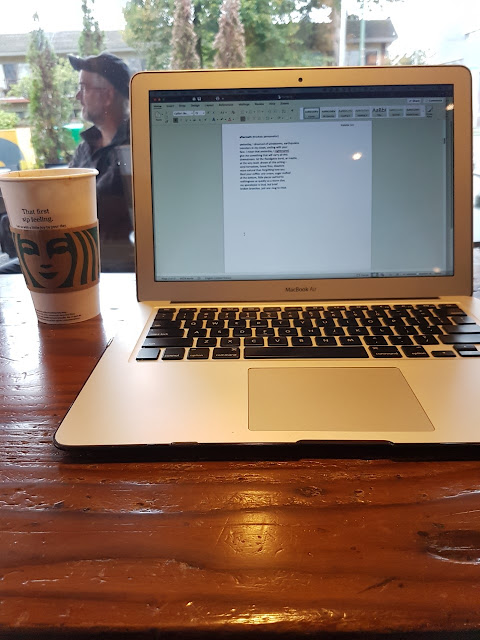 That’s why I find myself at a local Starbucks on this rainy Saturday morning. My best friend told me she was planning to come and write, so I decide to join her, a little bit late as always. I chat with the baristas, grab my drink—a pumpkin spice latte, which Twitter has informed me that I both should and should not feel guilty for enjoying—and sit down at my laptop. Clicking through files, I decide to edit some poems that I have deemed “contest worthy,” whatever that means, and continue my months-long wrestling match with a short story that I can’t seem to finish.

I fiddle with word choice, add new lines, erase them again, try different line breaks, erase them again, decide that a phrase doesn’t work in the poem, paste it into my notatio for later use, and stare out the window at nothing before starting the process again. About an hour in, I realize I need to snap a photo of my workspace (if you can call it that—it’s just my laptop and a singular Starbucks cup) and spend too long deciding which document I want to have pulled up on my screen. Afterwards, I realize that my friend’s workspace looks much cooler than mine, so I take a photo of hers, too.

To be honest, this wasn’t really my typical writing day, because I don’t have regular writing days. I guess that makes this piece more aspirational than anything, but I once I sat down and forced myself to start writing, I remembered how much I love it. While I’m waiting in this in-between, I could use some words to keep me company.

I re-read this piece, fiddle with word choice, try new ideas and erase them again. “Sitting at the intermission of my life.” You know, that’s not a bad line. It could even be a poem if I hold it to the light just so.

I copy and paste it into my notatio. That’s a project for my next writing day.

Natalie Lim is a Chinese-Canadian writer based in Vancouver, B.C. She won the 2018 CBC Poetry Prize and has work published or forthcoming in Room Magazine, Honey & Lime Lit, PRISM international and talking about strawberries all of the time. She is a recent graduate of Simon Fraser University, an unashamed nerd, and a believer in good bones. You can find her on Twitter @nataliemlim.