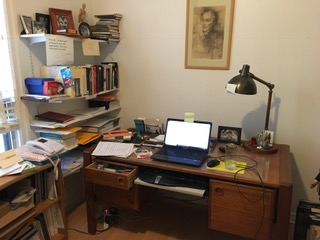 Last week, I was working on a story about a character who’s a writer. I tried to describe how she feels when she’s not writing.

I begin to question the purpose of everything I do.

I ended up deleting it all, in favour of an ominous throw-away line. My character’s apocalyptic state of mind felt unwarranted. And who would care, anyway, with all that’s going on in the world? I decided if the reader didn’t get it, no amount of explanation would help. Just now, I realize if I’d said the same thing in relation to a morning cup of coffee, it would have worked fine.

Which brings me to the start-time of this blog entry.

The opening three notes of the CBC news surge from the strategically placed clock-radio. I dash across the room and turn it off. Then I have a choice: crawl back into bed or get up and write. There’s a bit of pious self-talk in the order of: That novel will not get written from your pillow, and – most days – I find myself standing at the kitchen window, flipping the switch on the kettle, celebrating yet another triumph over Morpheus.

I’ve been doing this for three years now, starting when I realized I would spend another decade with an unpublished novel in my drawer if I didn’t. Getting up at five makes the difference between … here, let me try again: life making sense, and life not making sense. I once heard Orhan Pamuk say that writing fiction is a secret source of happiness. I may not be in his literary league, but I’m definitely in his personality type. Getting to spend a couple of hours in an imaginary world (even compulsively removing and replacing commas in that world) feels like immense bounty, to me. It wasn’t always this way (see futile attempt at description, above) and it’s so NOT this way for many others. So, I appreciate every second of it.

But I have a body and I have a brain and I have sleep cycles. It’s not always easy. There are days when that alarm feels like an affront to my very being, and exposing my eyes to the computer’s light sends a painful ping! all the way down my spine. Writing may be a calling, but it sometimes feels like the wrong kind of late-night call from Mr. Very Wrong.

So, I treat my mornings with the precision of an athlete, trying out various methods of waking up clearer and better prepared in less time. Last night’s screen time, or dinner, or wine consumption don’t make much difference. For a while, I cast a murderous eye upon the clock radio, thinking I might replace it with a new-fangled device that mimics dawn, but CBC is kind of sacred. I favour less mechanical solutions.

Lately, I’ve been drawing on a source I use for teaching my movement classes: 19th century acting manuals – specifically the breathing exercises. I’m probably doing them all wrong, but they make me feel great. The computer has not been hurting my eyes so much; I don’t have to use the thesaurus function as often, and I’ve even been waking up on my own, without the help of those three familiar notes from CBC. It remains to be seen whether the protagonist of my next novel will be obsessed with Mr. Very Wrong. But I suspect she’ll have her mind on loftier matters.

To quote the venerable Genevieve Stebbins:

“ … every particular molecule of the air we breathe is animated by a vibratory motion of its own constituent parts; it is, in fact, an invisible musical instrument complete in itself, ‘the tremors of which, when they impinge upon the nerves, produce in us the sensation of heat.’ Heat is a solar energy, and in this energy is the sum total of purely physical life. Apart, however, from those purely physical elements of the atmosphere, the air we breathe is charged with nature’s finer and more ethereal essences – magnetism, electricity and celestial ether.

Maria Meindl’s first novel, The Work, is being published by Stonehouse as we speak. She is also the author of Outside the Box from McGill-Queen’s University Press, winner of the Alison Prentice Award for Women’s History. Her essays, fiction and poetry have appeared in many publications including The Literary Review of Canada, Descant and Musicworks, as well as in the anthologies, At the End of Life: True Stories About How We Die and The M Word: Conversations About Motherhood. She has made two radio series, Parent Care, and Remembering Polio for CBC Ideas. In 2005, Maria founded the Draft Reading Series which specializes in unpublished work by emerging and established writers. Maria teaches movement in Toronto.