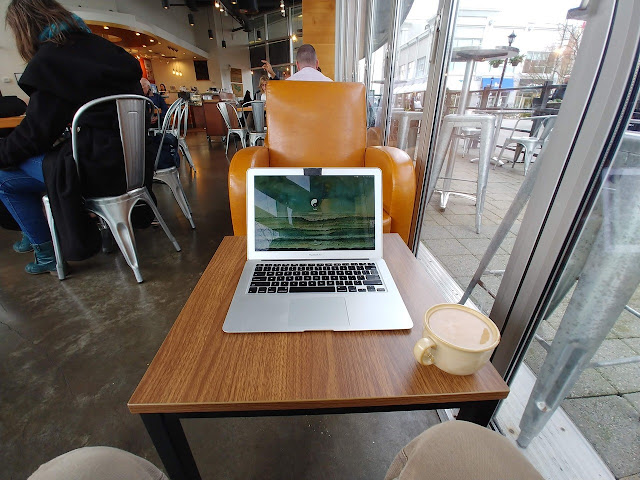 Asking a writer about their writing day is not really a single question. Embedded are things such as: Where do you write? When do you write? How long do you write for? Do you have a magical pen? What secret techniques do you have that will instantly convey talent, inspiration, and productivity? Or, to put it another way, what does your writing routine look like and what can I learn from it?

In my case, I don’t have a firmly structured “writing day” (or a magical pen, though I do have a menagerie of pens I’m quite fond of, including one with special abilities. More on that later.) What I do  have is a collection of habits that, over the years, I’ve found to be helpful.

One of my more useful daily habits is obsessive note taking. I’ve read that we have roughly 60,000 thoughts each day. Most of these are pretty banal. The sky is grey. Judy has a nice voice. If I drink any more coffee, I will have a seizure. Occasionally, though, we do notice something interesting or wind up on a new train of thought. I do my best to capture these thoughts, not because they are actually great thoughts but because it teaches my brain to notice and remember things. It also creates a storehouse of raw materials for possible later use.

Many years ago I participated in something called the 3:15 Experiment. Its rules were simple but not easy: for the entire month of August participants would set an alarm for 3:15 am and then attempt to write a stream of consciousness poem. The idea was that by writing while you are only half-awake you are more likely to make novel associations and less likely to edit yourself. It was a comprehensively awful experience but it did teach me a lot about how my brain works.

For the first few nights my writing was exceptionally dull. I found it difficult to come up with anything to say, never mind capturing the kaleidoscopic dreamlike images I hoped would appear. So I decided to cheat. During the day I began filing away ideas and images that I could quickly write about at 3:15 am. This would allow me to a) look like a creative genius and b) get the hell back to sleep. What I didn’t anticipate, however, was how willingly my brain joined in the game. After a few days, I was noticing details and making unusual associations during my normal waking routine. For example, a group of distant rocks became a metaphor for some old friends who, upon closer viewing, were not the warm and welcoming people I thought they were. Not especially profound, but it was unusual and, when handled by a hypnopompic 3:15 am mind, became something rather interesting. Kaleidoscopic even.

Middle of the night writing aside, there are no particular hours that I designate as “writing time” and no particular place that I need to go to find my muse. That said, I am keenly aware of time and its limitations because, really, it’s the most fundamental of all creative resources. Without time, nothing happens. Time is both strict and lenient. The days can’t be stopped or taken back, but they can be shaped. Which is why I take notes. And, yes, often in the middle of the night. This is where the pen I mentioned earlier comes in. In order to decrease the likelihood of disturbing my bed partner I use a film critic’s pen to make notes at night. Easier than switching on a lamp or actually getting out of bed, the pen contains a tiny light at its tip, just bright enough to let me see what I’m writing and dim enough to not FLOOD ME WITH BLUE LIGHT FROM MY PHONE EVEN WITH DARK MODE AND THE ORANGE FILTER ON. You can see an example of a film critic pen here.

When, by some miracle, the amorphous stage of fumbling curiosity takes shape as an idea, I change tactics. Curiosity never wanes but once a project is underway (as with my current book) it becomes essential to bring more structure to my writing day. I stop the ravenous rabbit-holing and focus on the project at hand. I create outlines in Scapple to help make sense and bring order to my myriad notes. I create detailed bibliographies and research links and, at long last, begin writing. Sometimes I start at the beginning. More often I start in the middle and make “filler notes” for the rest. If possible, I carve out four to eight hour chunks to “bleed” over the keyboard. And because I am part dog (squirrel!), I even wear clodhoppers: industrial grade ear muffs. If the end of the world should happen while I’m writing, please text or email. Because I won’t notice.

Of course, the most essential part of any writer’s “writing day” is to actually write. It is also the most difficult part. As Dorothy Parker famously said, “I hate writing but I love having written.” This is an exaggeration (when I’m in flow I literally cannot stop) but getting the ball rolling can feel both Herculean and Sisyphean. Those first words, that first paragraph are the hardest for the simple reason that no writer I know of (and certainly not me) is entirely convinced that they know what they’re doing. Self-doubt is endemic to writing.

This is why it's important to remind yourself, even against evidence to the contrary, that you can do this. So many creative people have shared their tooth-and-nail struggles with imposter syndrome. But maintaining self-belief is crucial — especially for writers. I can think of no other profession that trades so heavily in rejection. Even the most famous writers have had to swallow some very bitter feedback. Comfortingly, the idea that "good" is really a matter of taste is vividly illustrated in some of the hilarious/terrifying rejection letters published online. All those thanks-but-you-suck responses take a toll on the heart. But if there’s anything that separates a real writer from a scribbler it’s a bloody-minded stubbornness to just get on with it.

Perhaps you’re thinking that this sounds more mechanical than artistic. I won’t argue. I subscribe to the idea that inspiration is up to the gods and the work is up to me. Sure, there are those rare examples of inspired newbie authors who decide to write a book, which goes on to find an agent, a supportive publishing house, an eye-watering advance, and an enthusiastic readership. It’s also true that England and Zanzibar once went to war for 38 minutes and a woman named Violet Jessop survived both the sinking of the Titanic and her sister ship the Britannic. These things are possible, but if you sit around waiting for them to happen you may never write a word.

I’ve been writing and publishing for over twenty years but it never seems to get easier and I never feel more legitimate. Perhaps that’s as it should be. I think it was Carol Shields who said that feeling that we’re on the edge gives us an edge. My “writing day” is an ongoing attempt to quiet my mind’s “itty bitty shitty committee” while also making room for the magic that can sometimes happen when I invest the time and mental energy to get my thoughts down on paper. And make no mistake, it is an investment and it is magic. The urge to write is a mysterious tap on the shoulder that comes with no promise of success or fulfillment. It’s a compulsion that is not the same as inspiration. If inspiration is a hair-on-fire rush to the swimming pool, the urge to write is more like a persistent itch that scratching only temporarily satisfies.

In the end, maybe that’s both a reasonable definition of “writer” and a summary of my writing day. I’m just someone with a persistent urge to make something meaningful or beautiful with words.

Christian Fink-Jensen is a writer of fiction, non-fiction, and poetry. His work has appeared in more than fifty newspapers, magazines, and journals around the world. He is the author and co-researcher of Aloha Wanderwell: The Border-Smashing, Record-Setting Life of the World’s Youngest Explorer (Fredericton: Goose Lane Editions, 2016). In 2017 Christian was a finalist judge for the CBC’s Nonfiction Literary Awards. You can find him on Twitter @typomania and on his soon-to-be revived website: www.finkjensen.com  Christian lives in Victoria, B.C.