Steve Lambert : My (Small Press) Writing Day: Rev Her Up and Listen to Her Purr 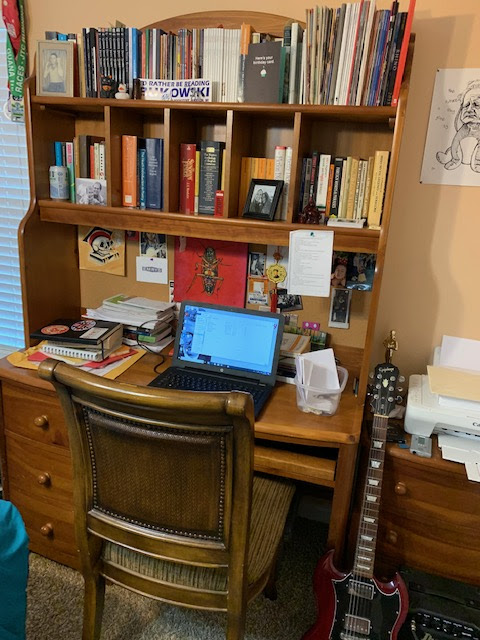 Cramped. That’s the word that comes to mind when I look at this picture. Not just the space, either. My writing days are cramped. My writing life is cramped. Shunted. That’s another good one. Shunted rhymes with stunted. It’s there, my writing time, but it’s not as healthy as it should be.

And, look. I’m not complaining. This isn’t self-pity. I’m happy for what I have, as meager as it sometimes may seem. But when I think about my writing day, that’s the way it goes. We do not use words here like abundant, ample or plenty. If you’re like me, you write what you can when you can and sometimes it isn’t much and sometimes it’s nothing at all. But the thing, for me, is that I’m almost always thinking about it. I may not have ample time, but that shunted and cramped corner of a room where I spend as much time as I can is just the point of the spear. It’s just the tip of the iceberg. It’s just the business end of things. The rest, where most of the work gets done, goes unseen and is carried around in the bucket of my mind.

Wow, that took a turn. Got a little weird….But that’s the writing life, ain’t it?

Truth told, that sliver of a room doesn’t even see enough action. I write on the move—on the fly—a lot. I like to think of William Carlos Williams, writing fragments and ideas on little scraps of paper (in his case, prescription pad) and shoving them in his pockets as me moved from house call to house call.

That little fragment of a room, where the books are, is a wish more than anything—a fantasy. A myth. “Here,” I point, “is where a writer works.” Well, it is. But it isn’t. Perhaps, in an ideal world—one where I can writer and only write—it is. And maybe it will be, someday. But for now it is a kind of relic.

Take my brother-in-law. He has a ’67 Chevelle poised and waiting in his garage. The thing is fully restored and beautiful and ready to go, man. He almost never drives it—but its there, and sometimes he goes out there and cranks the thing and revs it up, listens to it purr. Rarely, but often enough, he opens up the garage and takes her down the road. Might be for a spin around the block. Might be around town. On those rare occasions he, I’m sure, is very happy it’s there in the garage waiting. If it wasn’t, this drive around town or down the street would not be possible. And I’m sure he thinks, while he’s smiling and waving like he’s in a parade, I need to do this more often.

That’s me. That little cramped corner of a room is my ’67 Chevelle. When I’m not there, I wish I was, and I’m always thinking about being there. Sometimes I just I have a few minutes to go in there and rev her up and listen to her purr, and I guess—for now—that’s good enough.

Steve Lambert was born in Louisiana and grew up in Florida. His writing has appeared in The Pinch, Broad River Review, Longleaf Review, Emrys Journal, Bull Fiction, Into the Void, Cowboy Jamboree, Cortland Review, and many other places. He won third place in Glimmer Train’s Very Short Fiction contest. In 2018 he won Emrys Journal’s Nancy Dew Taylor Poetry Prize. He is the recipient of four Pushcart Prize nominations and was a Rash Award in Fiction finalist. He is the author of the poetry collection Heat Seekers (2017), the forthcoming chapbook In Eynsham (2020) and the forthcoming fiction collection The Patron Saint of Birds (2020). He lives in Northeast Florida, with his wife and daughter, where he teaches at the University of North Florida.