I'd like to retire there and do nothing,
or nothing much, forever, in two bare rooms:
look through binoculars, read boring books,
old, long, long books, and write down useless notes,
talk to myself, and, foggy days,
watch the droplets slipping, heavy with light.
From Elizabeth Bishop’s The End of March 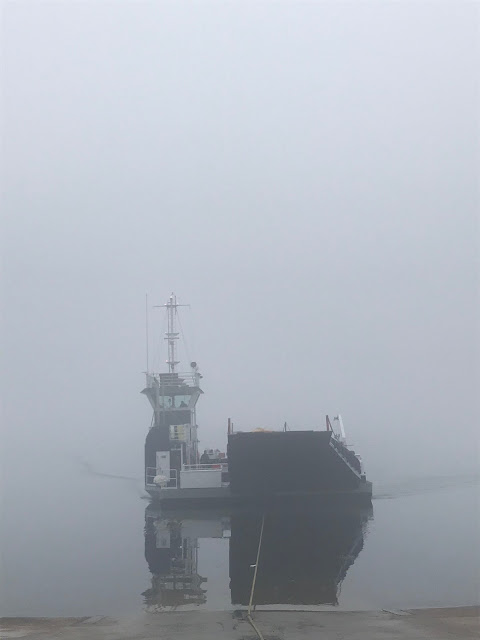 It's 5:30 am and I am standing on the back porch in my pajamas. It’s March and I’m shivering. The ocean is a roar away and the woods are heavy with fog. I can’t see her, but I can hear her— my dog Frida. She’s snuffling in the leaves behind the shed. She woke me moments before in what seemed a fit of desperate physical need, but which now appears to be more about disrupting the pre-dawn activities of the local wildlife. It’s an old trick of hers to get me up and I fall for it every time.

I call her inside just as the idea for a poem— in fact two lovely opening lines complete with em dash and semicolon— vanishes. I held it close as I rose from bed. I carried it with me as I descended the staircase. I cradled it on my shoulder, as one-handed I unlocked and stepped out the door. But now it’s gone, slipping away into the gloom. I watch it disappear with a sigh and a vague hope that the smell of coffee might bring it scratching at the window to be let back in.

I am an early morning writer. If it's summer and I am working at my seasonal job, I'll write between 6:00 and 7:30 am. If it's winter and I’m hibernating, this routine gets pushed forward and extended— an hour more of sleep, a half hour more awake in bed (writing in my head, reading, or trying to remember a dream), and then two or three additional hours of writing before dog walking, chores, and errands.

It’s now 6:00 am. I have my coffee and the dog has gone back to bed. I've re-kindled the wood stove (it is 14 °C in the house) and I'm at my desk with pen and notebook and computer. I’m still in pajamas, but I’ve added a wool sweater and a knitted hat. The notebooks are mostly for show and doodling. I write primarily on the computer; my left-handedness has been a perpetual curse and I’ve given up trying to decipher my own scribbling. My desk is an old wooden baker’s table (the top lifts to store flour and other bread-making ingredients). On examination, it now houses a jumble of papers, expired double A batteries, phone chargers, post-it notes, stamps, envelopes, an old tube of mascara, and a very stale pack of nicorette gum left over from the time I quite smoking (just in case). It's located in a west-facing ‘keeping’ room next to the kitchen, and in this old house (built in the 1890s) I like to think it was the room where babies were born. Most likely, it was also the room were the ill convalesced and the priest administered last rites. Today, there are bookshelves on all three walls. The books themselves were once arranged in alphabetical order— a system that quickly fell by the wayside. Keats is now cozied up next to Susan Musgrave. Philip Larkin’s Collected Poems leans into Margaret Atwood. I don’t think they’d mind.  Someone has carved the name 'Emily' into the old glass of the room’s only window. I don't know who Emily is or was, but I like to think that she (or the person who carved her name) would be pleased with what now happens here.

I do write in other locations and at other times during the day. My favourite spot and possibly my most productive time is when I'm waiting for the Lahave Ferry (the nautical short-cut to town) or during the actual five minute crossing. Internet access in the middle of the river is spotty, but I usually manage to get a few lines typed into a Google doc before losing the signal. The ferry is one of those ‘in between’ spaces where nothing is asked of you— you are simply along for the ride, and caught up in the motion of the boat and the current of the river, poetry will often find its flow. The ferry is great for first lines. Driving is great for reworking subsequent lines in my head or rummaging for a better word. 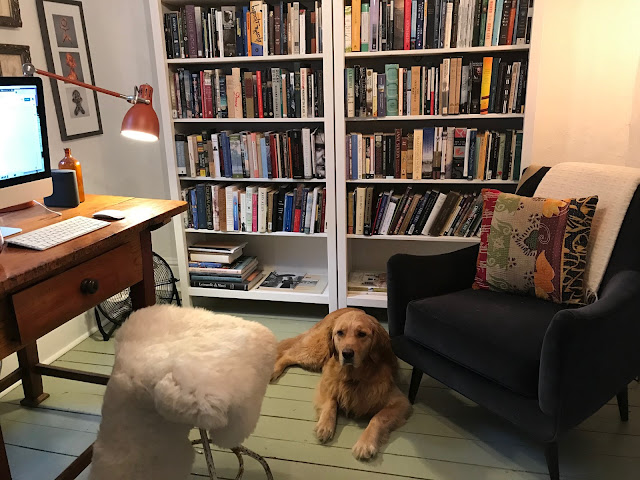 While I like to reserve part of the evening for reading, I will also write. In Ted Hughes’ poem The Thought Fox, he writes of poetic inspiration stealing up on him like a fox emerging out of the dark. I live in the woods so the idea of a poem entering the mind like a sly animal is in keeping with my surroundings. Outside my house, physical creatures reclaim their territory after the lights dim. Deer wander onto the porch (you can hear the click of their heels on the plank boards), raccoons and skunks circle the recycling bin, coyotes announce a successful kill. I know there are bears in the forest on the other side of the two lane rural route, but I have yet to find evidence that they make the crossing. They come to me in dreams and poetry, but never in reality. The most disarming of the animal sounds is that of the seals. From early spring to late fall, their halfling barks and moans drift on the wind up from the shore. I can't see them as I don’t have a water view, but they are close, resting on the rocks, yawping like a Greek chorus hidden in the wings.

It’s 9:00 pm. The domestic animals are settled in and I’ve returned to my desk. Outside, the stars blink on and the wild creatures stir. My fingers hover above the keyboard anticipating the arrival of the thought fox. I am not a prolific writer so her visits are quite rare— but still I am here, waiting, ready. If she doesn't come, I call the dog and we head outside for a view of the night sky. Tonight, it is unseasonably warm. Winter is losing her grip. The seals on the beach below begin to sing. It’s the first I’ve heard them since their departure last autumn. Frida cocks her head. I hold my breath and pause to listen. I like to think of them as my muses. I like to think they sing for me.

Lisa McCabe reads and writes in Lahave, Nova Scotia. She’s published poems (or has poems forthcoming) in a variety of journals, including The Sewanee Review, HCE Review, Limestone, Better Than Starbucks, A3 Review, and The Wellington Street Review. She’s working on a chapbook. She studied Film at York University and English Literature at the University of North Carolina, Greensboro. She worked in the field of software translation and localization before running away to the woods of Nova Scotia.