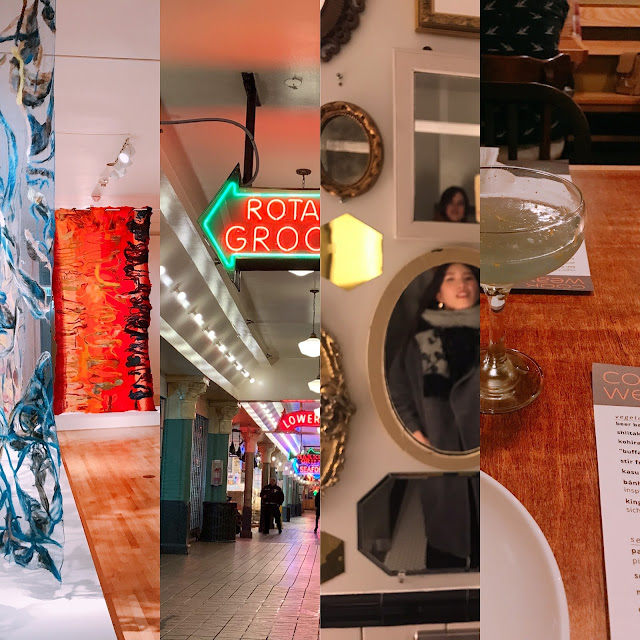 I am bad at writing regularly, which I am okay with. In the past months, writing has taken the form of conversations with friends at karaoke bars or bowling alleys. Mostly in Katelyn’s van, and rarely on paper. But today is the first day in a while that I am sitting down with my laptop, a planner, some barley tea, and revising a manuscript until it is unrecognizable. It’s Thursday, 5pm.

I need to be out in a world, any world so long as it invites language in and around me. Walking through Pike Place Market after hours with Katelyn, Corbin, and Nate, down Post Alley and past all the gum which someone (who?) removes periodically. The stalls are empty. The vendors break everything down at the end of the day, re-set the next morning. In that time between, the four of us stand among the quiet. When I reach for Corbin’s hand, when Katelyn places her chin on my right shoulder, I add another page to the poem.

I’ve missed all of the deadlines to major book contests. But I sit in the audience on a Wednesday evening, listening to Renee Gladman’s lecture on architectures. She describes writing as moving through portals. In the act of writing one thing, our minds have already made their way to another idea, and so we begin writing that too. Which explains so many unfinished works, sitting in my computer’s memory, and even now I have an itching to write a poem about a washing machine. To write two, or multiple, things—at once? I find comfort in the poem that is cut off from its end. I open space for the poem to sit in its uncertainty, to make room for other uncertainties.

I miss the deadlines on purpose. Poets read almost every night in Seattle, and I am instead pulled in their direction. And in the direction of the heated patio at Harry’s Fine Foods, under the disco ball that reflects on Corbin’s face as he scrapes burrata onto bread. At the end of the night, we walk uphill in the rain, every sound interrupted by my short breaths.

Today, I hesitate to write after reading a text from my mother. I think back to Jiwon’s Facebook status from December:

Byelingual: adj. when you speak two languages but start losing vocabulary in both of them.

I was taught to notice poetry’s silences. What space it takes, or refuses to, on a page. And in the reconfiguring of my mouth, tongue, thumbs as I mull over a response to my mother. The whiteness of paper, of an iMessage background. The switch from the English to Korean keyboard on my phone. The slowness with which I type out “I am writing” in Korean, which autocorrects to “I am standing up.” I have forgotten too many words, and every day, I fumble in our communication. In some other timeline, my mother understands the words as they are written, or I learn to write more fluently in a language she knows. These are some things I refuse to elaborate on that occupy much of my mind.

In writing, or language, I try to understand its harm as much as I try to remember the ways it can transform us. They exist together. And so, I write only when moved, when doing so seems necessary and not assumed. I allow myself the space to not produce and I know that this means I am learning to care for myself.

I think often of already-out-there poems, the ones that stay with me through the years, and the details of our first encounters which I seal in memory. I write to be in dialogue with the language and people and environments that have come before me as well as the ones that’ll remain long after I leave. I carry them with me in whatever iteration of my life. Beyond a desk, the walls that confine it, beyond paper, ink, a computer screen.

In her book, Hello, the Roses, Mei-mei Berssenbrugge writes, “And memory doesn’t end where my skin ends, but diffuses into my surroundings, leaving fragments of itself I may notice as ‘red rock,’ ‘friable cliff,’ reminding me.” And I wonder if writing does this, too—language’s vibrancy and violence that inscribes itself onto skin, onto the rim of cocktail glasses, chewing gum, metal chairs in a bookstore. Stitched on the shoulders of the people I love. Could we notice the fragments? There is language in every moment, and so in those moments, I write.

Woogee Bae writes poems and edits the ecopoetics journal Snail Trail. She received her MFA from the University of Washington Bothell. Her writing can be found in P-QUEUE, Poetry Northwest, Small Po[r]tions, Tagvverk, and elsewhere.