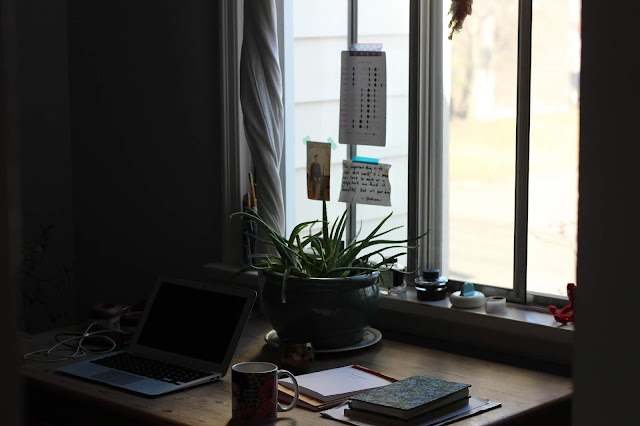 8:55 am  I come in from drinking a cup of coffee in our building’s back parking lot and look at a clock (the yellow kitchen clock). It’s good to sit outside listening to the city, smelling it. I don’t know why I stopped doing it. Jeanette Winterson writes about the vitality of liminal space, about preferring to leave her doors open and to sit in the doorways, half in and half out. And whenever Dylan and I go for a walk in a rich neighbourhood, the houses I point out are the ones with big porches, rooftop balconies, best of all the outdoor walkways between the individual buildings that compose very modern houses. The most I can do is to leave the windows in our apartment wide open all summer, and take my morning coffee in a communal space designed for vehicles. But it is better than the routine I’ve had all winter, of waking up and sitting down at my computer.

9:10 am  Sitting down at my computer. Writing this diary. Checking my email. Train has sent me the bios of the artists included in the upcoming issue I’ve had three poems accepted to. I’m in wonderful company. One of my undergrad English professors has sent me an email about corpse pose and her thoughts on isolation. Dylan and Ranger come in from the morning walk. I figure I should drink some water and eat something.

9:50 am  Make the bed, make oatmeal, think about whether to have a shower and what to do with my hair, talk to Dylan, take photos of my desk, eat oatmeal, type this, check my phone.

Joanna is posting on Instagram about the new Aunt Rachel poem she’s just received. I suppose I need to back up to explain this. At the end of November, I released a chapbook called Aunt Rachel Says 13 Poems, a collection of monologues spoken by a fictional character and written over the course of about a year and a half. I thought I was done with them. Then, three weeks into the quarantine, I wrote a new Aunt Rachel poem and decided to send it out as a kind of apocrypha to the chapbook. People seem excited about the prospect of real mail.

Dylan asks me if “think piece” was a term before the internet. I don’t know. I do know that I don’t like to do one thing at a time. As usual, I find myself with nine or ten projects I could choose to work on (in addition to the laundry that will send me to my in-laws’ house as soon as I can get my shit together). A novel about 7,000 words away from a complete first draft. A short story collection I’m revising for the third time. A new story called “The Murder House” I’d like to polish before sending out. A Super 8 documentary about Dylan’s 29th year, which just needs a few tweaks to the sound design. A documentary about Open Apartment (a salon I’ve been hosting for about five years), which we shot last summer and which I haven’t touched since. A grant application, due Monday, for a play I want to write with my friend Bevin. Notes to make on Dylan’s new script. An article on investing fees for the bank I contract for. A story about a failed threeway I wrote in the fall that probably needs a second, complementary narrative thread to make it work. But today I am determined to finish a treatment to send to the feminist pornographer Erika Lust, who runs a program through which female directors can apply to have their own films produced.

10:20 am  I read “What Makes Life Worth Living and Nature’s Beauty as a Lifeline to Regaining Sanity” on Maria Popova’s brilliant blog (post-blog?) Brain Pickings. Dylan asks me what my favourite Wislawa Szymborska poem is, and I think about it and then read him “The Century’s Decline.”

Our twentieth century was going to improve on the others.
It will never prove it now,
now that its years are numbered,
its gait is shaky,
its breath is short.

Too many things have happened
that weren’t supposed to happen,
and what was supposed to come about
has not.

Happiness and spring, among other things,
were supposed to be getting closer.

Fear was expected to leave the mountains and the valleys.
Truth was supposed to hit home
before a lie.

A couple of problems weren’t going
to come up anymore:
humger, for example,
and war, and so forth.

There was going to be respect
for helpless people’s helplessness,
trust, that kind of stuff.

Anyone who planned to enjoy the world
is now faced
with a hopeless task.

“How should we live?” someone asked me in a letter.
I had meant to ask him
the same question.

Again, and as ever,
as may be seen above,
the most pressing questions
are naïve ones.

- Translated by Clare Cavanaugh and Stanislaw Baranczak, from View With A Grain of Sand, Harcourt, 1995

11:05 am  Getting my shit together. Brushing my teeth, braiding my hair, putting on makeup, packing up the laundry in an old sheet, loading the laundry and the compost into the car, listening to Waxahatchee’s new record while driving ten blocks to the house Dylan grew up in, where I feel more welcome than just about anywhere. Even during quarantine, Gwen sanitizes the laundry room so her kids and their partners can avoid apartment laundry rooms and public laundromats, and Trevor makes Costco runs on behalf of the whole extended family. Last week he brought me a massive bucket of sour soothers.

11:20 am  I start the laundry. Gwen has left me a cup of magic elixir tea and a tiny orange on the dining table where I usually set up.

12:17 pm  I spend an unholy amount of time uninstalling Adobe programs from my laptop, which has been limping along with a full memory for months now. Text with Dylan and Joanna and Laura while waiting for the uninstallers to do their thing. Also clean up my desktop. Check on the laundry. Eat the orange, and a granola bar I brought with me. Rinse out a muddy towel we’ve been using to wipe Ranger’s paws all winter. Change the laundry over. Trevor comes downstairs for lunch and we talk about the seats for the plane he’s almost finished building, which I sewed covers for last week. They’re in place, they fit, and apparently they’re extremely comfortable.

1:32 pm  Finish draft of treatment. Does it make sense? Is it hot? I don’t know. I’ve worked from a scribbled outline made weeks ago, but it hasn’t taken as long as I expected today. I still have notes to make on visual style and references, potential performers, sound design, etc., and there’s still a load of laundry that hasn’t gone into the dryer. I’m super hungry, and also a bit cold.

1:50 pm  So I take my journal and an apple outside. It occurs to me that it is possible to sit on a threshold here, half in and half out, so I do that, my legs on the deck, my shoulders in the livingroom. I come in and check on the laundry. Gwen comes down and pours me more tea and tells me what is in this week’s Costco haul. She’e especially delighted about the large pineapple. We commiserate about the apparent citywide lack of full-fat yogurt; she can’t find it anywhere.

3:20 pm  Finish notes on treatment and send to Dylan with a caveat: “I think it could still use some work (I feel like it comes off as simultaneously pretentious and amateurish in parts), but I thought I would see what you think!” Seconds later, I text Dylan to ask if he’s had any dinner inspirations. I put the last load of laundry in the dryer and hang up the delicates.

3:35 pm  This Lisel Mueller poem appears on Twitter and it says what I was trying to say, writing about sitting outside this morning:

3:52 pm  So hungry. Dylan agrees we should make pizza tonight.

4:09 pm  Gwen brings me some trail mix and we talk about some policy documents she’s just written for her World of Warcraft guild. I copy the Lisel Mueller poem into my journal.

4:35 pm  Pack up the clean laundry and all my work things, empty the compost into Gwen and Trevor’s garage set-up, put the laundry and our allotment of Costco groceries into the car, drive home listening to Waxahatchee again. It’s so surprising and gratifying to hear Katie Crutchfield coming into her Southern sound without fear.

4:55 pm  Home. The new Wares record is waiting in a cardboard sleeve on my desk. I cut it open. Dylan puts it on. I rinse out the compost bucket. He puts the groceries away. Time to start the pizza dough in the big, blue, beautiful enamel bowl.

5:20 pm  Ranger and I have a nap on the couch while the Wares record plays twice. It’s good. Semi-conscious, my dog and I are proud of our city, glad to live here, for the moment, in spite of everything.

6:50 pm  We assemble a kitchen-sink pizza (a tomato-anchovy sauce from another day’s pot roast, potatoes, broccoli, mozzarella). It goes in the oven. I do the dishes, drink a lot of water, update this diary. Dylan reads Lawrence’s The Rainbow.

7:00 pm  Dinner. Dylan and I get into a long discussion about my treatment.

8:32 pm  Exhausted. I get into the bathtub with Lucy Maud Montgomery’s journals, which are schoolgirlish and tedious at this point (1894) and are making me pine for Plath’s relentless analysis and speculation and self-examination.

9:45 pm  Out of the bath, I feed Ranger, take some vitamins, brush my teeth, and take Ranger out for a last walk around the block.

11:40 pm  I spend over an hour shifting between Instagram and Duolingo, caught in a low-key war between myself and another German language learner who’s online, both of us trying to knock each other out of the #5 spot for the week. I impulse-order a green boiler suit. I text Dylan, who’s at the studio. And then it’s back to the land of no clocks.

Lizzie Derksen is a writer and filmmaker from Treaty 6 Territory. A recipient of the 2018 Lieutenant Governor’s Award for Emerging Artists (Alberta), she has been described as combining “curiosity, intellectual boldness, independence of mind, emotional sensitivity, and a sure sense for the rhythms of words and sentences with an aversion to sentimentality and fashionable notions.”

Esther Spellicy in the Main Game, a collection of three short stories, was published in 2019 by With/out Pretend. Other recent work includes Aunt Rachel Says 13 Poems, a self-published chapbook, and words in Poetry is Dead, Funicular Magazine, The Vault Zine, and on CBC Television.