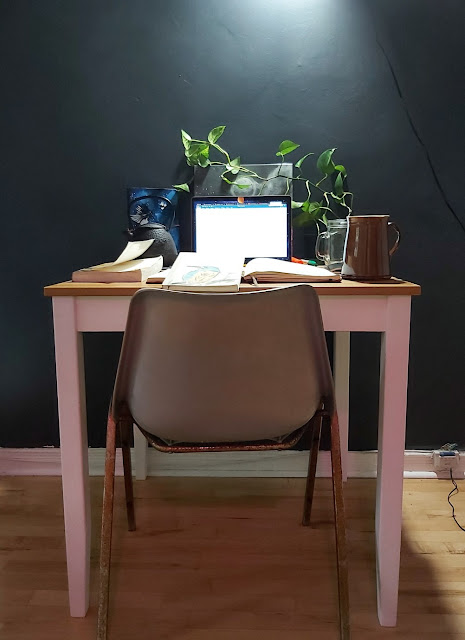 Since I have a day job (currently remote), much of my writing day occurs in fragments. This segmented writing process, I find, works for poetry over other types of writing. So much of writing fiction, for instance, comes down to diligence and regularity. A certain quota must be met, and whatever is written can be edited later. With poetry, the need for diligence and regularity comes in a different form: although I am not constantly writing poetry, do I feel like I constantly am in the poetry writing process. Reading is part of the process. Walking in the park is part of the process. Experience, in general, feels part of the process. These assertions may sound like excuses to avoid working, but in all honesty, it’s exhausting to exist in the process. As a poet—and a realist—I don’t really aim to make my art profitable, and so my writing day really consists in navigating around the constraints of a production-driven society. Or, put differently, my writing process is a learning process, one whereby I try to figure out how to be functional and productive in an environment that encourages speeding up over slowing down.
These days, emotion guides my writing. For a long time, I felt myself at a disadvantage: I was under the impression that most people felt emotions more deeply than I did; there’s a lesson about how we raise boys in there somewhere, I’m sure. As such, writing brought with it a great deal of pressure. It wasn’t until I realized that the obstacle wasn’t my capacity to feel but rather how long it takes me to process my feelings that writing stopped being something that I sit down to do but instead something intrinsically part of me. By allowing myself the space and time to breathe, to feel, and to create at a pace that feels both balanced and reconcilable with societal constraints, my writing now feels more natural and more honest. I think that poetry facilitates the act of questioning, and in that way each step in the writing process feels like a small act of revolution, especially under a hyper-individualistic capitalist system. So, being critical of everything around me, including myself, is how I lay a foundation on which the actual writing is produced. I stay open, vulnerable, and accepting. Part of that is accepting interruptions when they arise, while knowing which ones will undermine inspiration and which ones will enrich it. Interruptions can be periods of emotional and intellectual gestation. Or they can be instances where my cat sits on my lap insisting that I stop writing. 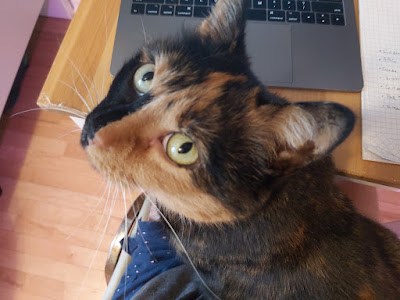 The day begins and the first interruption is, more often than not, an alarm. Once it has woken me up, I’m left with whatever lingering emotions my dreams have fuelled. The dreams themselves may have been forgotten but their emotional remnants bleed into my day. I make notes in my journal, which I write in constantly, and then make coffee, shower, dress, water my plants, feed my cat, etc. I put on a record, spend too much time on Twitter, check my work inbox as well as any climate justice organizing work I’m a part of, and read some of whatever book I’m engrossed in—at this moment it’s Lauren Berlant’s Cruel Optimism. Influence facilitates the writing process for me, especially abstract art because there’s greater room for interpretation. Sometimes a song will play, which provokes a feeling; I put that song on repeat to sustain the mood, so that I can work out its significance and its resonance. Throughout these tasks, it’s the writing itself that becomes the interruption because it is integral to how I understand what I am consuming or doing; thinking, feeling, and experiencing inevitably prompt writing for me. The writing isn’t always poetry; it can be a journal entry that I will eventually strip until it reads like a song. Sometimes I can write the poem all at once, and even then, it isn’t ‘done’ because it too must be processed, digested. I need to sit with my poems the way I need to sit with my thoughts. I write a poem multiple times, first by hand because I can place the words exactly where I want them to be without having to fiddle around with the spacebar or the return key. A poem can take anywhere from an afternoon to a year, and even then, regarding it as complete is questionable. But there is a sense of ‘done-ness’ at some point whereby a poem, though bound to my experience and my subjectivity, feels like it can breathe on its own. The rest is up to a potential reader.
The process of writing is not just an integral part of the day; it is not merely an action, but rather a state of being. The writing itself may not populate most of the day but it gives the day its meaning. 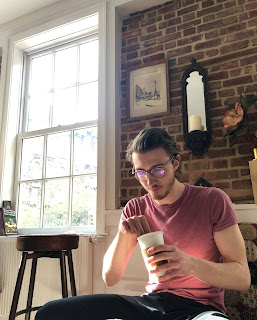 christian favreau is a poet and activist living in Montréal (Tiohtiá:ke). His work has appeared in antilang, Lantern, Vallum, and elsewhere.