Matthew Burnside : My Writing Day (which is Actually Night) 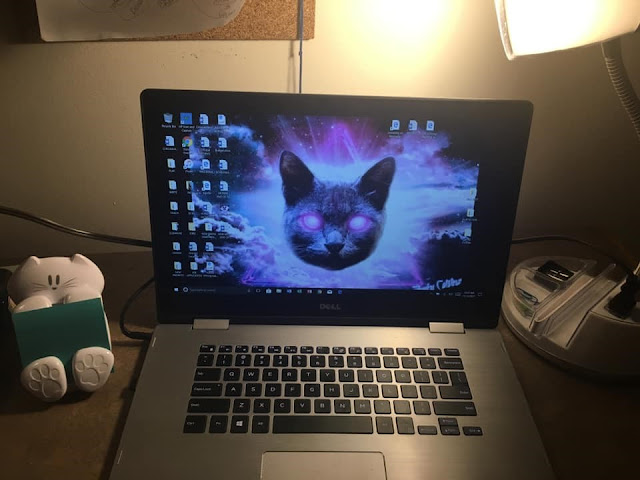 Midnight: Begin with doubt.  This is the most important step.   The buzzkill birds loom, swooping low in the valley of my imagination.

12:01: Once I swat the prattling buzzards out of my brain, I accept there’s no such thing as perfection & finally get to work.

12:02-12:30ish: The words that always come out first are bad.  They are the top layer of the murky lake that is language, to be scraped off before I can dive deeper.  Fooling around, fighting ink clouds & octopuses while lost in a twilit undertow, is necessary to get to a depth where I no longer recognize my surroundings or have the usual comforts—my go-to sentence rhythms or easy-to-grab imagery. All the things that have “worked” before. If I’m writing, I’m writing to create something new. A texture I haven’t touched before. Capturing lightning so I can sell the bottle is pointless: I am interested in creating electricity.   Shattering glass.

12:31-12:35: Flounder a bit longer until I stumble upon something interesting, completely unrecognizable yet at the same time familiar on a level that is not altogether discernible to me.

12:36: At this point I will look at a picture of a dog to ready my heart for the seemingly insurmountable task ahead.

12:37-2:00ish: The actual writing of the thing. This involves a lot of jumbling & fumbling around of puzzle pieces: sentences, syllables, syntax.

2:01: Catch my breath. Stare out the window. Witness a tree. Think about where seahorses sleep, or how light ever managed to catch itself on the moon’s fang.

12:02-12:30: Initial pre-revision. I dive back into the work & look at it, as if with eyes that are not my own, for the first time. Read it as a tourist trekking up & down a landscape with a history of hauntings. {As I do this, in the back of my mind I’m really asking myself a few questions: 1) first of all, are all of its numerous planes in alignment? To borrow the imports of Aaron Copland’s How We Listen to Music – discussed as well by Benjamin Percy in his book Thrill Me: Essays on Fiction – I assess whether the work is functioning equally across its sensuous, expressive, and musical plane. 2) Consider have I rendered something too polished…if so, I shave off some of its edges so it’ll still cut 3) Lastly, ask myself what has it taught me? What has it untaught? What could it never teach me & how is it unfolding its inability to contain a neatly syncopated lesson? If it remains inscrutable as an open wound yet feels somehow still complete in its effect, I leave it be.

12:31: Again I consult my muse: a picture of a dog, this time as reward for my completed task.

12:32: At some point I sleep. Lifetimes pass (it seems) until I write again, even if, as it often is, the very next night that I’m back at it. Fits & starts of other projects intercede, fight each other for notice. The most profitable one never wins…it’s always the strangest, most misunderstood project that earns my attention.        I’m never quite sure of what I’m doing though I retain the same nocturnal routine. Insomnia makes it easy to night-write. Ever since I was young my mind has been restless. Telling myself stories helped to lull me to sleep.

12:33 & Ever Afterward: Eventually I try to find a home for that thing that I wrote. Rejection ensues. Sometimes an acceptance. Sometimes a near miss. Sometimes people say a nice thing or nothing at all. Most of the time, just radio silence & an overwhelming suspicion that I’m writing into a void. But I’m grateful for those rare instants, brief & flickering as they are, in which the void speaks back. I feel the nights spent wrestling ink clouds & octopuses have not been squandered. Language winds back like the whir of a cog, the swoosh of a pendulum. Skulls & flowers. There is motion, matter instead of silence. The Unsaid, usually assembled as a desert static with sand, flowers forth a cactus or two. Those idling, spinkill buzzards get shooed away & every mirage riffles with possibility.