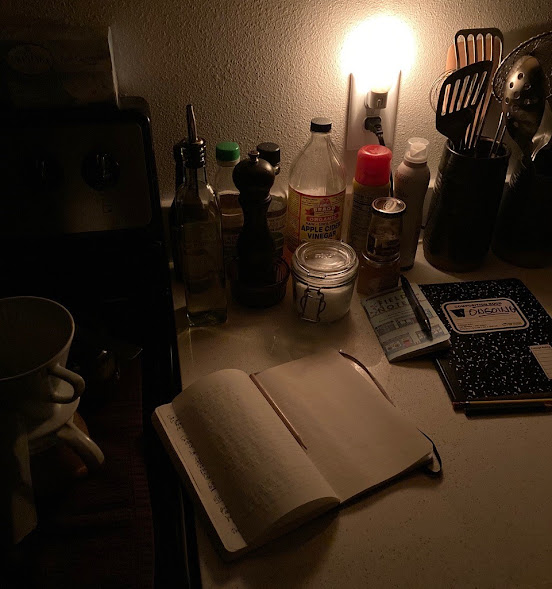 I almost always wake up at five a.m. without an alarm, whether I really want to or not. Our society generally admires larks rather than night-owls, but I don’t think there’s anything particularly admirable about this. That is, if I am in any way virtuous, it’s got nothing to do with when I wake up in the morning.

My wife tends to sleep till closer to seven, even if she sets her alarm for six. So I have the apartment to myself for a few hours each morning. I go out to the kitchen, leaving all the lights off, and write in my journal at the counter near the dim nightlight. I look out the window at the darkness and gathering dawn. I try to wait as long as possible before handling any device that glows and has internet access.

Besides my journal, I keep another notebook nearby, which I call my “ongoing” notebook. I jot down sentence fragments, syllabic rhythms, snippets of nonsense. Sometimes only a few lines, sometimes a full page, sometimes — all too often — nothing. I fill about two or three of them each year. I don’t look back at old ongoings often enough, which is silly, since this is where most of my poems start. Some mornings are all journal, some all ongoing. Some mornings are neither, are nothing.

I’m in no hurry to make my coffee. Sometimes I make it right away, sometimes I wait until my wife wakes up and I make it alongside her cup of tea. The quotidian day begins. Errands, work.

The next block of time I usually have for anything writing-related is in the early afternoon. This is when I revise and edit poems, write and read emails. If I’m on a submission jag, this is when I’ll send things out; it’s the time of day I’m most capable of focusing on detailed, boring administrivia and least likely to want — or need — to daydream out the window.

After dinner, if I don’t give myself over to Netflix on my iPad, I spend the evening reading. In a large quadrille-ruled spiral notebook, I doodle and make notes which I never look back on later.

Just before bed, I write a quick entry in my logbook. I started doing this six or seven years ago when I noticed that my journal entries were swamped with insipid stuff like what I had eaten for lunch. I was using that sort of obsessive detail-logging as a shield to keep me from engaging in the real speculative work of talking back to myself about what I had been reading, thinking, and so on. By offloading that sort of thing to a nightly logbook entry, I couldn’t hide behind it anymore. My journal entries got shorter and less frequent, but the signal-to-noise ratio was much more satisfying to me.

Most things start longhand, so I have tons of notebooks and pencils stocked up. And pens, too; mostly cheap ballpoints. I first wanted to be a writer in fourth grade, largely because I loved how pages curled as I filled them, then curled the other way as I wrote on the other side. I had terrible handwriting in elementary school, but even then I loved the look of a page filled with handwritten words. I type faster than I write so, out of necessity, plenty of things tend to start on the computer. But it feels like a substitute, sometimes it even feels fake. A day without at least a few minutes with a pencil in my hand is a day that doesn’t seem quite as real.

This is not an ideal day or a typical day. This is, with very few modifications and for many years, the baseline. This is every day. Even so, I’ve been surprised to find that despite all the shit that 2020 has thrown at me, at all of us, my daily ritual has remained utterly unchanged. I’m not sure what to make of this. I suppose I’m good at going through the motions. If I’ve learned anything from being a writer it’s that sometimes this is all we have. Not words, not poems, certainly not “inspiration.” Just the rhythm, like a heartbeat, like breathing. Make coffee. Hold a book in front of you. Sharpen a pencil. Doodle in a notebook. Look out the window. Try again tomorrow. 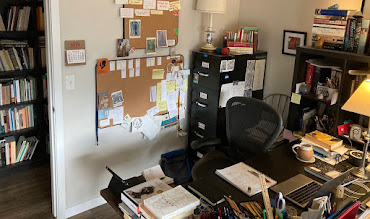 Robert van Vliet is a poet, designer, and teacher who lives in Minneapolis. His poems have appeared in Otoliths, The Sixth Chamber Review, Otata, Haikuniverse, and in several self-published chapbooks. His website is letterspace.org, and his blog is A Foolish Consistency.
at November 16, 2020