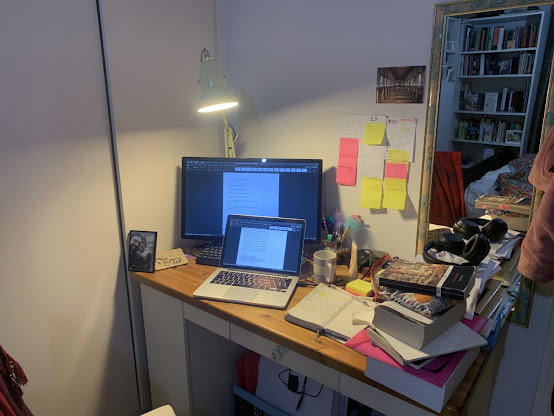 I’ve been waiting about a decade to become a morning person. At first I assumed my need for sleep was just because of puberty. Then because I was an undergraduate with too many deadlines and too many wine-fueled night out. Then because I was depressed. Now, teetotal and comprehensively an adult, I guess I’m just one of those people just need a lot of sleep. Fine. I love sleep. People who don’t like sleep confuse me. People who don’t like pillows confuse me. Sleeping is great.

So on a writing day I wake up, eventually, and then I have to take iron pills for anemia. This is a recent development and it’s horrible: the pills are heavy but also if you drink caffeine with them they don’t really absorb. Which means waiting two hours until I can have a cup of tea or coffee. My flatmate might make a pot and ask me if I want some and then I have to scramble to work out when I can drink it: sure, make some now, I can drink it in... 27 minutes. Those two hours seem like dead time: I usually try and answer any outstanding emails and come up with a to-do list for the day. I love lists... breaking tasks down so you can tick more off... what a feeling.

There are two main spaces in my flat to work: my desk, and the kitchen table. When my partner moved countries he left me the spare monitor and it’s been a revelation, especially for PhD work and revisions. (If you haven’t got one I cannot recommend it highly enough.) Unfortunately my room is also noticeably colder than the rest of the flat, especially in winter, so the payoff for having the second screen to work on is being incredibly cold. As I’m writing this, I’ve got a jumper on underneath my dressing gown which in turn is underneath a blanket. There’s a cherry-stone cushion somewhere too. Sometimes my cat throws herself into the mix. She’s usually somewhere in the room as I write, buried under the duvet with her tail sticking out or sleeping on the floor next to me.

When I was a teenager writing angsty poetry for the first time, I wrote most of it in biro on giant pads of paper. I’d type the ones I liked onto the family laptop, print them off and stick them in a ringbinder: odd mix of analogue and digital technologies. I miss writing by hand but I definitely think that the connection between creativity and creation has moved onto the keyboard for me. I need Word to think through.

I’m very bad with keeping to schedules, although I’d love to be one of those people who can keep emails to one section of the day, writing to another, etc. I tend to write in hugely intense bursts when it comes to prose, whether that’s non-fiction or academic. Poetry is different. Sometimes I do sit down ‘to write a poem’ but usually I’m doing something else when an idea, or line, strikes me, so I’ve got a lot of hasty notes on my phone. Usually when an idea comes, rather than rush to write it down straight away, I work it out in my head a bit: key words or phrases, a sense of the tone. I don’t have a visual imagination at all which probably helps, but it means I don’t ‘see’ the poem: I just... think it.

This means that a writing day doesn’t so much involve writing as it does editing. Are they the same thing? I’m trying to become more rigorous with my editing process, to come back to poems more, to read them out loud, to not be happy with them. I attended a helpful editing session with Will Harris at the Poetry Society recently. (Okay, writing this I thought it was ‘recently’ and then realised it was almost a year ago – the bizarreness of pandemic time.) That was important both for me to think more confidently of myself as a writer, but also in giving me practical tools: changing the tense of a poem to see what happens, that sort of thing. I was always afraid to edit too much, but now I’m like, hey, why not try it out? I’m also becoming happier to just stop when a poem isn’t working for me. And again, the computer saves them all. There’s all sorts of stuff in my ‘In Progress’ folder that maybe one day I’ll come back to. Or maybe not!

Once I’ve stopped working I usually cook dinner with my flatmate and then spend the evening watching a film, or reading, or catching up on the volunteering work I do. I try and read every day – sometimes dipping into things throughout but mostly at night. Novels, essays, poems. I’ve been teaching a first year university course on Poetry this year and it’s been a great chance to revisit some poems and even come across a couple of new ones. Showing students how to read and seeing them get it – it’s a great feeling. At the moment I’m about halfway through Bleak House, and I just read Miles Bradley’s chapbook Emotional Dance Music.

Alice Wickenden is finishing her PhD on Renaissance books in London. She has poems in Anthropocene, Cypress and Coffin Bell and a forthcoming chapbook with Variant Literature called To Fall Fable. In her spare time she volunteers for Abortion Support Network, and reads to her cat.