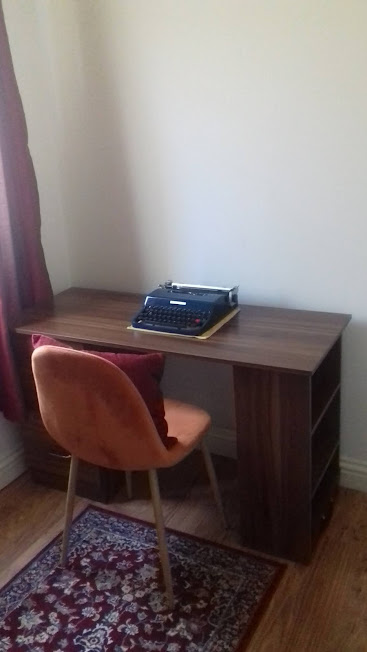 As a teenager, my relationship to writing was spontaneous. I wrote on receipts and scrap envelopes with pencils and ballpoint pens. Throughout my twenties, I felt pressure to be a “real writer” so filled notebooks, dogmatically drafting everything by hand before typing it onto a computer. I grew out of this phase and began writing short texts by hand and long prose on a laptop.

When I moved into this two bedroom flat, it felt right to dedicate one of the rooms to writing. My proclivity leans away from fussiness, which aides the focus it takes to write for stretches of time. The typewriter, which I’ve only started working on this year, sits alone with the exception of cups of tea or bottles of beer.

Writing as it’s commonly understood - lines or sentences read in a book - holds as much creative potential for me as visual poetry or sound poetry. On the occasions I create visual work, the Olivetti Lettera 32 typewriter is replaced with whatever medium I’m working in. Recently, this has been handmade, intentionally crude, stamps. For typewritten visual poetry I use a Silver Reed 500, which is otherwise an ornament on my living room’s coffee table.

I bought the Silver Reed 500 for £30 from Etsy to see if I’d use it. Typewriting clicked with me immediately. It was only a matter of months before I saw the Silver Reed’s limitations: the paper support holds half the page; the margin stops are inaccurate; being secondhand, the tabulator setting doesn’t work…

My interest in Olivetti typewriters came from my love for Frank O’Hara, who used the brand to write his poems, but the earlier Lettera 22 model was the tool of pioneering visual poet Dom Sylvester Houédard. Houédard was a monk at Pricknash Abbey, which is a short drive from my home city of Gloucester. As such, I associate the Olivetti with the history of experimental literature and a sense of place. Alongside these associations, typewriting comes with extraordinary utility.

I find computers are great for editing but no so good for writing. Typewriters lock the writer into an act. It’s harder to erase and correct. The writer has to accept what is written which, and this is a good thing, forces them to redraft. This process is better than what I used to do by hand or on a laptop: edit as I went along.

All this said, I’ve worked a lot with found language. It’s easier to move and sculpture chunks of text on a laptop. I’ve done some digital visual poetry but, even then, it’s rooted in work I’ve done on the Silver Reed. I’ve occasionally used online devices (cut-up machines, anagram generators, obscure language databases) which have called for the laptop to be alongside the typewriter, generating text digitally before it’s typed onto a page.

With a full time, 9 - 5, job on weekdays, I tend to go for a walk after work. After this break, I write. Having a job that is unrelated to writing is less of a threat to creativity than running an online journal. Responding to emails, formatting pieces and championing work on social media eats into time. This has been manageable since taking on an Assistant Editor in the fourth quarter of last year.

Writing is often spoken about as cocooned from the rest of life. The truth is it’s contingent on how one lives. It’s easy for me to fit writing into my life. I live on my own, without a TV, and have little interest in big name video on demand services. Twitter, despite its many flaws, has been amazing for engaging with literary communities, finding opportunities for my work and launching the journal. Maintaining a mostly analogue writing practice makes navigating digital spaces less stressful.

Richard Capener's work has been featured in Sublunary Editions, SPAM Zine, Streetcake, Beir Bua and Rewilding: An Ecopoetic Anthology, among others. His pamphlet Dance! The Statue Has Fallen! Now His Head is Beneath Our Feet! is forthcoming from Broken Sleep Books in September 2021. KL7 is due from Red Ceilings Press in early 2022. He edits The Babel Tower Notice Board, and co-curates the associated Live From Babel Tower reading series and the Babel Parish Radio podcast.