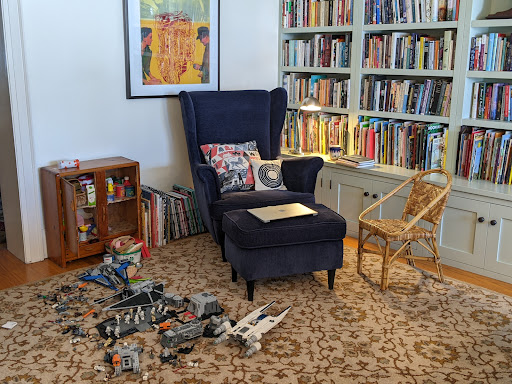 7am: Wake up, and am hit with the memory that I had a picture book manuscript rejected yesterday. The editor liked it enough to take it further, but market research on the subject meant it wasn’t a guaranteed hit. Decide to write about the experience. Burrow under the covers plotting the opening, until a desire for coffee and the knowledge there are children requiring attention drives me out of bed. I am needed: someone can’t find pecans for porridge. Dried cranberries must be restocked. There are things.

7:40am: Read an email from my agent, who is sending the manuscript to a second press. And by “read email,” I mean review the email thread of rejection—twice—ending with my agent’s final email, containing only a thumbs-up emoji (she is both wonderful and wonderfully pragmatic).

Picture book sales feel more pressing, because of the timeline from signing a contract to your book appearing on shelves—there’s usually a three-year lag. I have picture books coming out in 2023 and 2024; I’m hopeful that I’ll be able to share this work with the world in 2025. By comparison, I signed a contract with Gaspereau Press in 2021—something which still stops me in my tracks—and it is, press permitting, due to come out this year. (I was worried my pandemic-inspired Poems for Reluctant Housewives would be less relevant by the time it appeared, but apparently I was overly optimistic on the subject of global health.)

8am: Help youngest find books they absolutely must show a grandparent or the world will combust. (Kate Klise’s 43 Old Cemetery Road chapter book series, for the record. Not the youngest’s favorite though—that would be Minerva Mint, a modern Pippi Longstocking minus the racism.)

8:20am: The older child is now in online schooling, having forgotten to shovel the neighbor’s snow, which means I need to get to it. Unless I also get distracted…

8:30am: Everyone else is taken care of, which means I can shower in peace. Start plotting a piece about yesterday’s rejection to send to Rob, since he asked for something almost three months ago, and I’ve done nothing. Also know I need to grade like a fiend today—I’m a professor, and have full classes. But all writing happens in moments stolen from something else, even this.

8:40am-9:20: I spend time writing about my rejection, and the oddities of children’s literature versus poetry. Poetry is written because the words demand attention (at least mine is); those who engage it do so because of the language (or at least I do). By contrast, those who buy children’s books may be indifferent to language—it is enough there is a koala or a mermaid or a curious simian on the front. But that needn’t signal indifference on the part of the writer.

My piece is on its way to being good; it makes interesting points about how people encounter picture books, and the trouble with signaling subject versus theme without being wholly didactic. Then I read over rob’s email from November, and realize this is not what he asked for at all. NOT AT ALL.

9:30am: Read about how rob spent June 20th, 2017. Start reconstructing my morning, realizing not only have I not shoveled, I’ve also not eaten breakfast. My much beloved spouse emerges from the basement, where he’s mostly in meetings 9-5, except for breaks to forage for coffee and food. This inevitably leads to a conversation about email, university policy, or Star Wars, depending on who is around. My desk sits in the laundry room, directly above his. In the pandemic, with both of us at home, this creates too much noise, and so I’m tucked into the corner of the kitchen, by the shelves, supervising children and working.

9:40am: Have I mentioned the children are schooling at home right now? That’s all you really need to know about lost minutes and hours. At least my breakfast is finally made. Glancing at the book sitting beside my coffee—Dominique Béchard’s chapbook One Dog Town—I’m tempted to secure a post-it with GRADE FIRST to it. I have very few volumes of poetry at home, having always kept poetry in my university office, tucked beside the desk, for moments of quiet. The pandemic has meant no regular access to my office, and the loss feels a bit like a phantom limb at times—the phantom bookcase surprises me at least once a week.

10am: The oldest has a break. I send them both out to shovel, mentally checking “phys ed” off the list. Quickly review Booskscan for weekly sales of my first picture book, She Stitched the Stars: A Story of Ellen Harding Baker’s Solar System Quilt, which has now been out almost four months. Some context: last year, I attended a mock acquisitions meeting staged by one of “the Big 5” presses. Things I learned: 1) when deciding whether to sign a children’s author, the press pays much more attention to how active the author is on social media than I ever would have guessed; 2) sales figures of past books matter, but are difficult to come by. Now, here’s what I learned after that: as publishers don’t share sales figures, prospective publishers consult Bookscan for numbers. The problem is Bookscan doesn’t fully capture the market—no ebook sales, no school or library sales, etc.—and doesn’t include sales outside the US. So as of today, Bookscan says I’ve sold 74 copies of my first picture book. Last I checked, the publisher had sales at over 1500, and that was November. (Feeling compelled to add a link to a piece unpacking Bookscan.) I try to imagine these conversations happening at any Canadian small press, and realize I have only vague knowledge of what the sales expectations for a chapbook like mine might be. 100 copies? 200? Researching this furthers my appreciation for the labour of love on the part of small presses. When I read aloud the numbers to my spouse—who has a degree in printmaking from Emily Carr—he proclaims “It’s like art.” Of course.

10:30am: Remember that comment about children schooling at home and lost minutes and hours? There are questions about what to make for “first nutrition break,” the most soulless name for lunch that schools could generate. The youngest needs to share that she’s just watched a video for school about “Mr. Unpredictable” who is, apparently, a villain. I’m ambivalent about this characterization.

11am: Grading is well underway. There’s a meeting at 12:30 that may go three hours or more. So please, imagine me grading, scrounging lunch, in meetings, and being interrupted relentlessly for the next few hours. (My brain recycles a quote attributed to Tillie Olsen about motherhood being “always interruptible,” but I’ve never had the time to verify she really said it.) First, more coffee.

1pm: My spouse takes the youngest to a walk-through Starbucks and brings me back half a brownie. Brownies make online meetings better. At dinner I will learn the brownie was because they felt sorry for me, because my manuscript was rejected. I will ask, if I got two rejections, would I have gotten the whole brownie, or had to give the half back? We will laugh.

2pm: In meeting still, but have received a notification that Songju Ma Daemicke tweeted one of my Instagram posts which featured her picture book, Tu Youyou's Discovery: Finding a Cure for Malaria. After the mock acquisitions meeting mentioned above, I realized I’d have to tackle Instagram. At the same time, there were no summer camps for the children. So we started using their toys to stage photos with children’s books. It kept them busy and generated content. It turns out the posts with dolls generated the most attention, so we stuck with them—fair enough, my Instagram reflects my writing for children, rather than my poetry. Children’s publishers strongly advocate authors promote their work, and in a pandemic, there are no in-person readings, launches, book fairs, library events, etc. This is the best solution I’ve come up with that doesn’t drain my soul. I’m not meant for Substack, TikTok, or reels. Insufficiently confessional, for one thing—don’t look to me for autobiographical poetry. On Instagram I am followed by a number of Barbie collectors in Russia, which fascinates me. Who are these people? What are their lives like? Aside from friends, I follow artists, mostly printmakers—are they as bewildered by me?

5:07pm: The grading is over—for today, at least. Now it’s time to cook dinner. I’m realizing my only writing today will be this—no usable fragments will float into my head, demanding attention. Those get jotted in one of the notebooks I buy, based on sturdiness or whim (the ones acquired on whim are inevitably more portable). Today has been a laptop day. Meetings and grading have sapped me of everything but irony.

8:30pm: The children are blanketed in their beds, the spouse is back at his basement desk. I’ve swiped the electric blanket we keep here for my father, and am cradling a hot toddy (it’s -32 with the wind chill, and our house is old). Julie Doiron sings while I plot what to do this weekend—besides groceries or dusting or monitoring online student discussions or that thing I promised someone. It’s likely I will write something, that there will be words which take over my brain until I agree to jot them down. Saturday will be my real small press writing day.

Jennifer Harris’s poems have appeared in Columba and Matter. The pandemic-inspired Poems for Reluctant Housewives is forthcoming from Gaspereau Press. Her debut picture book She Stitched the Stars: A Story of Ellen Harding Baker’s Solar System Quilt appeared in 2021; forthcoming picture books include When You Were New (HarperCollins 2023) and The Keeper of Stars (OwlKids 2024). She needs to update her website: www.mypbjam.com