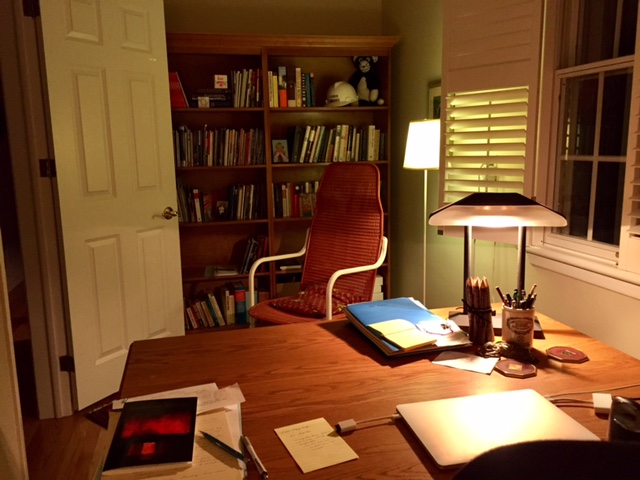 On the top shelf of the bookcase facing the desk in my study, there’s a white Stelco hard hat with my name on a brass plate affixed over the bill. The hard hat leans against a large black and white knitted cat. The cat was pressed into my possession by a compulsively generous friend when I made the mistake of admiring it during a visit to her house.

A picture of that friend, whom I’d known since Grade 3, is propped on the shelf below the cat. She died last spring after decades of coping in resolute good cheer with various forms of cancer. In the picture, she leans forward with a smile of enthusiastic encouragement that helps me in writing’s darker moments.

The next row down features a small photograph of my father aged about three, dressed in white and gazing with puzzled curiosity toward the camera. My childhood basement held porcelain developing pans. On the same shelf are two small artworks by one of my granddaughters, who carries a shoulder bag filled with sketching supplies wherever she goes. Below that are a couple of books on the Boer War, acquired when I was thinking of writing something set in the era. My father’s father volunteered for that war. His photo, taken in Halifax pre-embarkation, his ammunition belt and bayonet, and a letter from South Africa to his sister in Manitoba, are in a paper bag in the closet to the left of my desk. A couple of Bibles share the shelf with the Boer War books, available for a dip when I crave the rhythms of King James prose.

No one of these bookcase items has inspired a poem or story. But they confirm my rootedness in this space and remind me of the richness of life’s small details.

Originally this room served for sewing, ironing and the hiding and wrapping of gifts. Over the years, the sewing gear moved away and the drawers of the credenza behind my desk filled with stationery, files, clippings for inspiration, computer and sotftware manuals, and specialized cords for successive generations of electronics.

My desk itself is actually a writing table, its legs cut down a bit to suit my height. Normally it is covered by heaps of more or less organized books and papers, my preferred reminder system being visual, my most effective motivation being to get one more thing off the desk.

At the moment, desk and room are unusually tidy, having been emptied ten days ago for a paint job. The books have been weeded down to poetry and short fiction that I might actually want to consult. The new wall colour, slightly less yellow than the one I’d enjoyed for many years, is called “Sand Castle.” It is my hope that it will free my mind to roam in empty spaces where interesting shapes and sounds may emerge.

I took my first literary workshop in my fifties. By then, my work habits had been formed by years of office jobs. I get up between six and seven, depending (now that I have retired) on the light from the east window. After an initial mug of coffee and radio news with my husband in our bedroom, I get dressed, eat breakfast with him at the kitchen table he built, and go to my study, with greater or lesser dilly-dallying on the way.  Usually I work till 12:30 or 1:00. Then, after lunch, go for a long walk. This routine-based approach used to feel wrong to me as an aspiring creative person, until I learned about Alex Colville. Six days a week, he put on a jacket and tie, and after breakfast walked upstairs to his studio. There, he took off his jacket, hung it up, and worked until noon. I don’t suppose he dilly-dallied.

Jean Van Loon, an Ottawa writer, holds an MFA from UBC. Her short prose, poetry and reviews have appeared in numerous Canadian literary magazines. Her first book of poems, Building on River, will be published by Cormorant Press in April 2018.