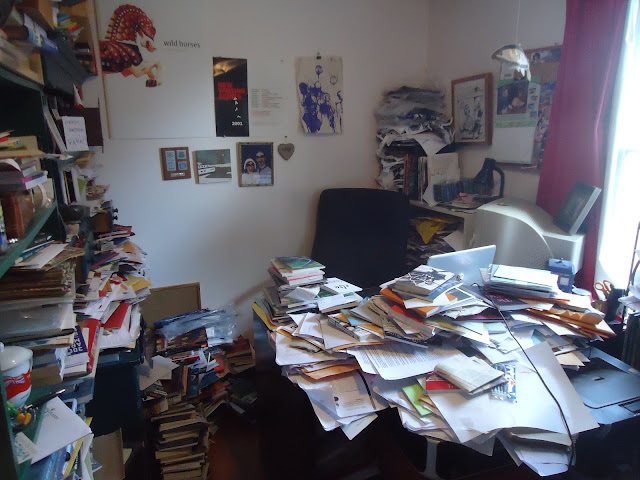 While I’m at my desk, I attempt to do all the things I simply can’t do when the children are around. I always have at least half a dozen Word files open, allowing me to concurrently sketch out a review or two and poke at an interview or two, alongside whatever larger writing project I’m accumulating. Any morning of work might involve some, or even all of the above. It used to be that I could only keep two or even three large projects (fiction, poetry) in my head at any given time, but circumstance, at least for the time being, seems to have reduced that number. Over the past ten months, I’ve been carving out poems for the work-in-progress “the book of smaller” (a selection of which appear as the chapbook It’s still winter). My file of in-progress poems from the same project might number more than forty, but only a handful might ever be completed, and that might take a day or two for the completion of another poem to add to the pile, or it might take a week. I add phrases, erase others, and rearrange constantly. Only once I feel as though the project has exhausted itself will I return to the file of finished pieces for rearranging and potentially removing poems for the sake of a completed manuscript. We aren’t there yet, but soon.

My desk is an ever-shifting excess of books, manuscripts, paper, chapbooks and journals. During mornings, coffee. Notebooks, once a staple of my coffeeshop/pub writing days, only emerges once a month at most, when I manage to get an afternoon at the pub for an outside writing stint, as everything else is composed, now, directly into my laptop. It means far less paper usage, and far less to sort to send to the University of Calgary, but I still need to print pages out to be able to “see” them properly, once I’ve managed another draft (including this, some five or six times) to edit with pen, before printing out the next draft. Otherwise, what throughout the 1990s was a series of handwritten drafts has condensed to the space of a laptop screen, cursor blinking over whatever it is I’ve just added, altered or removed. As well, with my ongoing activity as a reviewer, mounds of books cover and surround my small black desk, as well as a side-stack of comic books at the ready, for when I need a small break or refresher. Also: Facebook and email and Twitter are constantly open. Sometimes it’s a matter of palate cleanser; other times, simply a way to freshen up while remaining still in my head. Sometimes a response to an interview question will arrive requiring me to compose the next question, to send off into the ether. Either way, I remain at my desk until, through children or other requirements, I am no longer able. 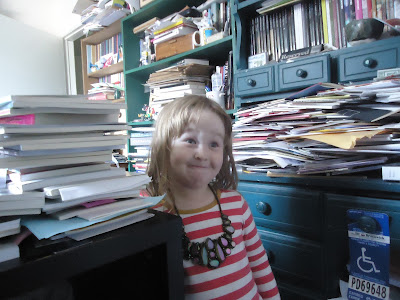 My writing days have shifted enormously over the past five years. I’ve gone from twenty-plus years of writing full days in public spaces to writing in my home office during and around the children: Rose is nearly four, and Aoife is seventeen months. There are tea parties, trips to the library and various parks, and a series of errands, play-dates, appointments and what-nots. There are social visits, including writer friends with their own small children. On weekends, Christine allows me further time at my desk, interrupted only occasionally by preschooler requests. Over the summer, I hired a local teenager to come in two mornings a week to play with the girls so I could work at my desk. With the advent of fall, Rose is now full-time in junior kindergarten, and Aoife has her two mornings a week of preschool, both of which are no more than two or three blocks away. I manage the household as best as I can, but am also attempting to re-emerge into a larger, sustained attention for the sake of short fiction, and even a return to my long-languishing novel. Given my more scattered days up to now (Aoife was too small for preschool, and Rose’s preschool ended in June), I thought attempting short, compact poems made the most sense: a project that suited my attention-span, instead of battling my attention for the sake of a project I simply couldn’t keep track of.

On mornings Aoife has preschool, we’re out of the house around 8:30am to first drop Rose at her school, loop back to the preschool and I’m back at my desk by 9:07am, having to head out the door at 11:17am to collect Aoife for lunch. After lunch, she might nap from ninety minutes to two and a half hours. There is no puttering around the house during these periods: I am at my desk. I can do housework while they are awake, so why shouldn’t I? They assist with baking and picking up toys, and should be aware that housework isn’t something done by magical elves while they sleep. When I am without them, I should focus on the things I can only do when they are away or asleep. I may be getting less done, but I am exactly where I want to be: I can’t imagine anything better, or more satisfying.

Born in Ottawa, Canada’s glorious capital city, rob mclennan currently lives in Ottawa, where he is home full-time with the two wee girls he shares with Christine McNair. The author of more than thirty trade books of poetry, fiction and non-fiction, he won the John Newlove Poetry Award in 2010, the Council for the Arts in Ottawa Mid-Career Award in 2014, and was longlisted for the CBC Poetry Prize in 2012. In March, 2016, he was inducted into the VERSe Ottawa Hall of Honour. His most recent titles include the chapbooks It’s still winter (above/ground press), Household items (Apostrophe Press), Cervantes’ bones (words(on)pages) and Forty-seventh birthday (Apostrophe Press). His latest full-length collection A perimeter appeared last fall with New Star Books.
at September 10, 2017