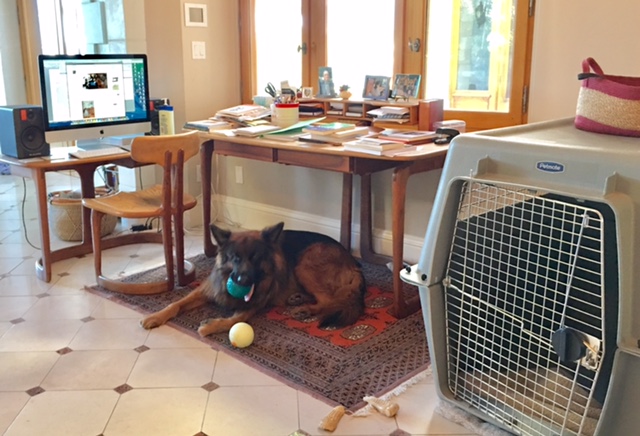 6:30 a.m. and I’m up. I’m up and it’s a pain, because I often don’t go to bed until past midnight. I’m up early because I have to walk the dogs Athena and Ajax to make them “Go potty,” feed the cats Artemis and Missy Scarlet, clear the cat litter, take out the trash with said cat litter in it, then feed the dogs—that’s the typical start of my day. I have my first cup of coffee when I begin feeding the dogs, which isn’t soon enough. But if one of the dogs hasn’t pooped during their first foray outside, I add a second walk specific to making either poop. When they refuse to do it—and my young Ajax is in the midst of being “Terrible Two”s about it and refusing to go as scheduled—I inhale a deep breath, look about at the gorgeous mountain where I live and declaim at the gorgeous air, “Shit!”

At which point, the overhearing, ear-slumped Ajax may poop. If not, I give up and return to my writing desk. I’m irritated—as it distracts from work—that I have to keep an eye on Ajax during the morning lest he poops in the house, but I know there’s no forcing him (I take him out again before noon). Fortunately, the dogs are within sight as they’re forever about my ankles and when I sit at the desk to write they surround me. Indeed, living on a mountain means I have space—I actually have a writing studio elsewhere in the property. I also have a desk in the second story of the house. I’ve ignored those settings for years now for a desk in the kitchen as I need to be with the dogs—rather, the dogs need to be with me—24/7. Who knew German Shepherds were so clingy?

My desk, desk chair, and computer table in the kitchen were created by artist Larry Buechley (http://buechleywoodworking.com/home/) from Santa Fe, New Mexico. I’ve had the set-up for more than two decades, and love the furniture’ lines and curves. But its image is overcome by the mess of books and work files atop it, and the dogs, dog toys, and egregiously ugly plastic dog crate surrounding it. Still, I take a cheesy pleasure from plunking my butt on “art” to make art.

I define “a good day” as one where I’d made something. Because I’m a poet, that “something” is usually a poem. Ideally, it’s a completed draft of a poem, or a completed section of a long poem. (Sure, I can return to such for edits later but my goal is to have a completed draft.) Because I want all my days to be good days, this has made me quite prolific—to date, about 60 books and chapbooks. 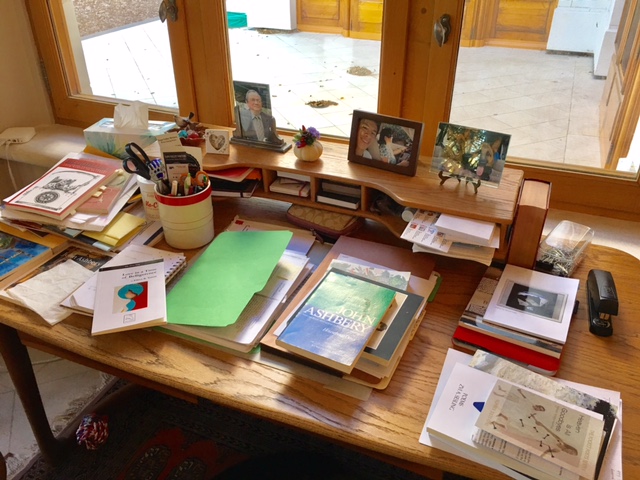 No doubt this schedule stems from my beginnings as a creative writer. At age 35 I had switched “careers” from international banking to writing. When I did so, I had a horror of becoming one of those folks who are supposed to work at home but end up being addicted to television soaps (or, nowadays, Netflix binge-ing). So I would (self-consciously) spend the stereotyped bankers’ hours of 9-5 at my first writing desk, the dining table, writing, researching-by-reading, then writing some more. Even when I didn’t feel inspired, I usually ended up writing as … there was nothing else to do when you force yourself to be stuck at the desk-table. As it did in banking, though, my hours usually stretched far longer than 9-5 after the initial phase of getting accustomed to my new workstyle.

Nowadays, I try to hit my “daily something” goal in the mornings. In this sense, that goal shares something with exercise—best to get it out of the way so that you can relax to enjoy the rest of the day. To date, I’ve had better luck with the daily writing goal over exercise.

Usually, one poem (or decent poem draft) a day is sufficient. More recently, I’ve been trying to write more poems as quickly as possible because I’m in the middle of a project entitled “The Ashbery Riff-Offs” whereby each poem begins with 1 or 1-2 lines from John Ashbery’s “Self-Portrait in a Convex Mirror.” Given the length of Ashbery’s poem, I estimate my series will total about 300 poems when completed. At the time of this writing, I’ve written 130 poems. As the initial euphoria begins to wane, I’m trying to do what I can to prevent the project from becoming drudgery, which includes trying to finish all of the anticipated 300-ish poems as quickly as possible. (I just realized with this writing: that’s about 170 more poems! Aaarrrgggh!)

After having made or written my daily something, I then turn to other matters such as editing projects (Galatea Resurrects, The Halo-Halo Review, The Filipino-American Artist Directory Ekphrasis Project, my “Poets On ____” series as well as various anthologies, the most recent of which will be a collection of essays regarding world views and making connections from people of various backgrounds/professions); other writing projects like reviews and one-off “assignments” like this blog post; curatorial projects like readings/events; publishing tasks (Meritage Press); and reading books. In between everything and anything I’m always reading books. Because I work out of home, it’s usually easy for me to fit in literary work between my other duties (related to managing a property, among other things) as well as the current ongoing work of taking care of two dogs and two geriatric cats. As regards cats, I’m on hospice duty feeding Missy Scarlet, an 18-year-old cat with cancer, thyroid problems, kidney problems, and internal bleeding. Missy Scarlet is now 15 months past the initial date her oncologist thought for her expiry. May she live to enjoy one more Christmas with us! But until then, I (or a petsitter) have to be around to feed her every 2.5 hours.

If I don’t succeed in making my daily something in the morning, I spend the rest of the day trying to do it in between all else. But whether or not I achieve that daily something, I try to continue literary work until at least 5 p.m.  In other words, I don’t begin my Netflix binge until after that hour—though I often interrupt it to go back and forth to something literary.

To avoid cabin fever, I try to leave my mountain home once a day. I usually go after lunch to the local post office (where I am on too-familiar terms with the staff given the amount of mail they process for me—I receive and send a large amount of books) and then the local library. At the library, I take work that I can manage to do in an hour or two there, e.g. a review, or a poem, essay or other work to edit.

I should note that my solitude—thus working ability—is enhanced by how my son is away at college and my husband works long hours at his office. Solitude increases the time available for writing—this is beneficial as I believe there are things that are possible only through (enlarged) scale, i.e. prolonged time and focus. Last year, for instance, I finally managed to complete the first draft of a novel after 20 years of attempts. I plan to return to the novel after I finish “The Ashbery Riff-Offs.”

Perhaps an exception to the above routine is the writing I do for one journal, PURCHASES: Another Damn List Project!  I’m a believer of lists—it helps me organize as I am always multi-tasking. The list itself has become a generative source of poems such that one of my Selected Poems books is INVENT(ST)ORY: Selected Catalog Poems & New 1996-2015 (Dos Madres Press, 2015). With PURCHASES, starting on Aug. 26, 2017 I began keeping a list of everything I buy—from a dog walker’s service to a new vacuum (just acquired!) to groceries to books. While the project is not quite a month old (as I write this essay), it already reveals that it will achieve my hope or goal that such a list creates an autobiography. For example, a Sept. 17 entry reveals that I bought a bottle of St. Francis merlot to bring to a party held by poet and decolonialism scholar Leny M. Strobel. This ended up being the entry point for me to note that Leny’s party—attended by many poetry lovers—ended up being the California book launch for a recent book, Love In A Time of Belligerence (Editions du Cygne, 2017). Today’s entry includes postage for sending Love … to a person who might translate one of the poems into Arabic—which would be a first for me.  So PURCHASES is a form of infrastructure for sticking with the keeping of a journal. And, in fact, I generally believe that writers and others in a profession where so much depends on self-motivation should try to set up an environment that gives them a reason to do their work. 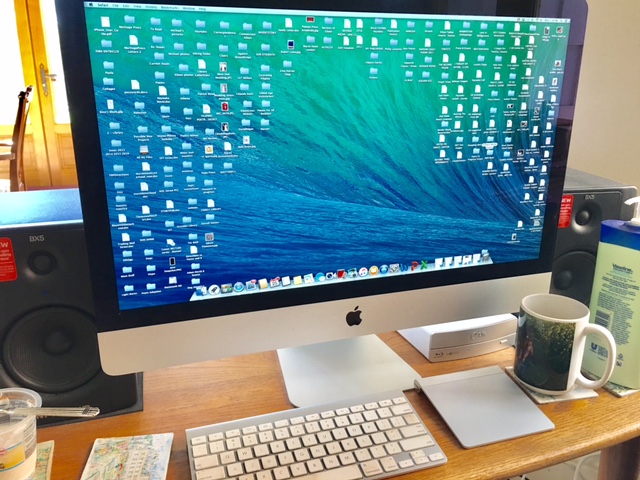 If a desk reveals something about the writer, my e-desk or computer desktop suggests I’ve succeeded in finding more balance in my writing lifestyle. If you look at it, there’s a center space cleared of any icon—the whole desktop used to be covered with icons! The Type A personality in me would look at that image and say I’m not working hard enough. But the dogs by my feet remind me to kick Missy Type A on her ass. 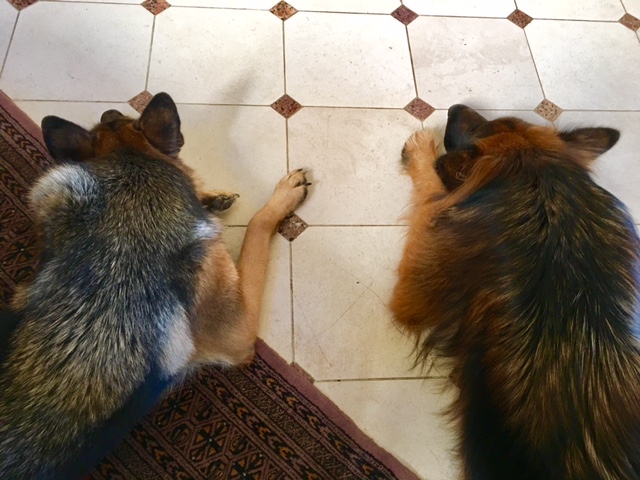 Nuff said. It’s 3:24 p.m. and I failed to achieve my “daily something” this morning. Off to write.


Eileen R. Tabios (http://eileenrtabios.com) loves books and has released over  50 collections of poetry, fiction, essays, and experimental biographies from publishers in nine countries and cyberspace. Her 2017 books include The Opposite of Claustrophobia (Knives, Forks and Spoons Press, U.K., 2017); MANHATTAN: An Archaeology (Paloma Press, U.S.A., 2017); and Love In A Time of Belligerence (Editions du Cygne, France). Inventor of the poetry form “hay(na)ku,” she has been translated into eight languages. She also has edited, co-edited or conceptualized 12 anthologies of poetry, fiction and essays as well as served as editor or guest editor for various literary journals.