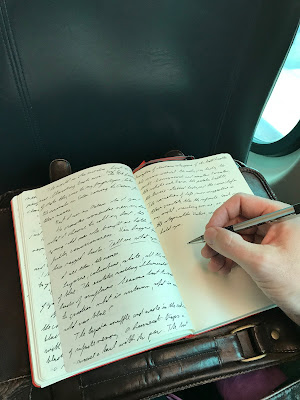 It has taken me years to come to terms with the fact that my typical writing day does not look much like a writing day at all. Yes, I’m an academic, with summers off, and so when I’m not teaching a summer course or looking after my daughter I do sometimes get to enjoy atypical writing days, riding my bike in the morning along the Evanston lakefront to my favorite coffee shop, The Brothers K., where I can sit outside with a mug of drip coffee under waving leaves and get distracted by the conversations of the regulars—older men shrugging off Trump, middle-aged women meeting each other before the daily routine kicks in, and the usual assortment of students and  professor-types perched over their laptops. I’m thankful for such days, though they are usually unproductive by most external measures. I leaf through a book of poetry, or a literary magazine or recent issue of the London Review of Books, that I picked up at the Chicago-Main newsstand a block west. Coffee, I find, stimulates the frontal lobe, so these are good days for editing, or working on a piece of criticism, or transcribing something I’ve written by hand. The wifi is spotty at The Bros. K., but I don’t much mind this—it throws me back on my own resources. But the best place in which to find those resources is elsewhere.

My typical writing day happens during the school year, on the Metra Union Pacific North line to and from Evanston and Lake Forest College, where I teach. It’s a little more than half an hour station to station, but it’s a golden half hour. The outbound ride usually gets eaten up by last minute teaching preparations, and anyway, I’m full of coffee. More often than not the writing doesn’t happen until my teaching day is over, when fatigue has loosened the screws and the reality principle is at bay. I wait on the platform at Lake Forest, fronted by the eerily picturesque small townscape, equally evocative of both F. Scott Fitzgerald and The Stepford Wives, and some small part of me begins to gather up the threads of yesterday’s narrative. The train arrives, a tarnished silver snake, and I climb up to the second level and put my briefcase and notebook on my lap. A real notebook, the latest in a seemingly endless succession—for a long time I was a Moleskine boy but now I favor Leuchtturm1917s, with their delightfully enticing front matter: Inhalt • Content • Contenu. Sometimes it takes a stop or two for me to resolve a familiar argument with myself: It’s been a long day—you’re pretty tired—wouldn’t you rather just read, or listen to a podcast, or stare out the window, or close your eyes? The other voice answers, Just look at it. I open the pages of the notebook and look at where I left off yesterday—in mid-scene if I’m lucky, but otherwise the unnerving blank that comes at the end of a scene or chapter. The window provides its soothing spectacle of the same green-tinted suburbs I see coming and going each day—there’s that emerald field in Fort Sheridan, like a scene from the west of Ireland, a view all the way down to the lake, green giving way to blue; there’s The Humble Pub (Est. 2015) in Highwood, its bleak cinderblock façade giving nothing away; can downtown Highland Park with its faux-Tudor rooftops be far behind? The inside of the train offers its own familiar landmarks—the conductors sauntering below in the aisle, calling New riders, please!—and the tall Asian man in his sixties who takes up two seats every day, snoozing in his stocking feet, and the office workers relaxing with tallboys and talking up the Cubs. Without thinking too hard about what I’m doing, almost to the point of pretending I’m not doing it, I take out my pen (I like Sharpies) and pick up the dropped thread. And it’s like the movement of the train becomes my own movement, the pen’s movement, my mind’s. By the time we’re approaching Davis Street I’m flying through the scene, and more often than not, I have to scramble to gather up my notebook and pen and briefcase and whatever else I’m carrying to hustle out the door and not miss my stop. If you see me on the platform looking flustered, open notebook flapping in one hand while my other worldly possessions are slipping and sliding out from beneath the crook of my arm, you’ll know that it’s been a good writing day,

Joshua Corey is a poet, translator, and novelist whose most recent works in those genres are The Barons (Omnidawn, 2014), Francis Ponge’s Partisan of Things (Kenning Editions, 2016), and Beautiful Soul: An American Elegy (Spuyten Duyvil, 2014). A collection of critical essays, The Transcendental Circuit: Otherworlds of Poetry is forthcoming from MadHat Press, and a hybrid work about Hannah Arendt and Martin Heidegger’s notorious affair, Hannah and the Master, will be published by Ahsahta Press in 2019. He lives in Evanston, Illinois and teaches English at Lake Forest College.
at October 15, 2017