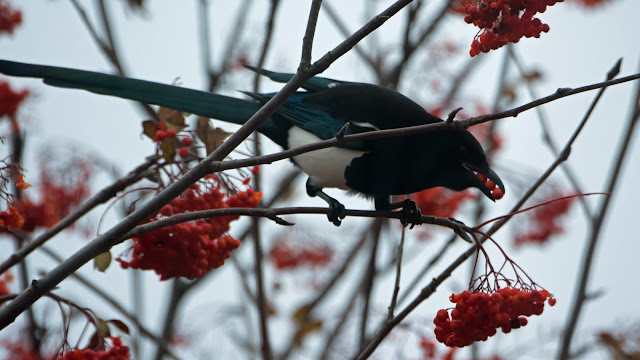 Today I wake up to a red sky. Before I get out of bed I read Facebook statuses, share articles, and like and love lots of things. I like and love just down the road from a crusher, like and love as chunks of limestone clunk their way up a conveyor belt and fall to the hammers, like and love as the limestone is pulverized. The sky clouds over. It feels like the clouds are crushing my bones. On Twitter I see a story titled “The Trump-Era Boom in Erasure Poetry” from New Republic. I read it and retweet. Drizzle on the window. A CBC story called “'3D storytelling': Deaf Crows slam brings poetry to life” pops up in the feed. I read and retweet that too.

Mostly cloudy, says Environment Canada. Getting up takes a while. Today is the day I will remove the poems from the bulletin boards. The main edit of my upcoming book is complete. Just the copyedit to go and that’s that. It’s time to clear the way for new work. That’s what I said yesterday, too. Instead I watch the mountain ash bob with the all-day come and go: late robins, another influx of pine grosbeaks, Bohemian waxwings, and ravens. Sitting in my chair, feet up on the desk, a cup of coffee at my side, I zoom in and shoot, catching a magpie as it loads its bill with berries. I’ll post a magpie pic to Facebook along with a little pun or haiku. This has become standard practice.

I like writing reviews. I like deadlines. I like constraints. Today there’s none of that. Today it’s mostly cloudy. Poems come when they come. I sit here and wait. Today I doubt I’ll get anything done.

It drizzles off and on. The pressure keeps falling. The stack of books beside my desk is still waiting. I used to start my day by reading poems, but that has fallen away with the rise of social media. Now I generally read poetry and nonfiction in the afternoon and fiction before bed. Right now I’m halfway through The End of Days by Jenny Erpenbeck, a stunning novel I learned about on Facebook. These days I find the best word-of-mouth recommendations in the Facebook comments of my friends.

I no longer hear the crusher, though I know it hasn’t stopped. It hurts to hold the camera up thanks to yesterday’s flu shot. It hurts to drink coffee, it hurts to hold a book. It doesn’t hurt to watch birds. Hordes of poems are still pinned to the bulletin boards. They could very well be the last poems I’ll ever pin there. This is when it should drizzle for the sake of the narrative, but no. It’s neither cloudier nor clearer. My magpie pic has received some likes and loves. My friends are good that way. That’s enough.

Brenda Schmidt is a naturalist and visual artist living in Creighton, a mining town on the Canadian Shield in northern Saskatchewan. Author of four books of poetry and a book of essays, her work is included in The Best of The Best Canadian Poetry in English: Tenth Anniversary Edition (Tightrope, 2017). Her book Culverts Beneath the Narrow Road will be published by Thistledown Press in the spring of 2018. She is the seventh Saskatchewan Poet Laureate.