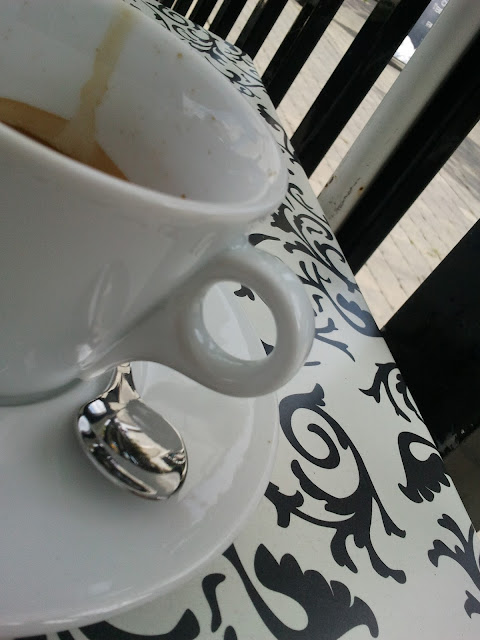 My (small press) writing day never happens in the same place, and it’s not really a day at all. It happens when I scribble furiously in a notebook or on the back of a receipt (my stories are often ... quite short), or when type equally furiously, albeit more legibly, on my computer, on my phone’s notepad app, or in an e-mail to myself from someone else’s computer. These moments are disjointed, but they are not afterthoughts – the passages that come out have often been stewing in my brain for hours beforehand, waiting for me to take a minute to record them. They must, however, be the moments to wait. They are the part of my day I do for fun and for love, and like the rest of the things I do for fun and love, I’m not allowed to put them first.

In some ways this works in my favour, I like to think (or at least I like to tell myself, which isn’t the same thing). The countless weird places where I do my writing shape it. If I find myself writing while sitting on a streetside bench outside my office on my lunch hour, the passersby often walk right in to the stories; one of the baristas at the coffee shop halfway between work and home became a main character in a novel (I didn’t even have to change his name since I never knew it). As I write this, though, I fear it hasn’t all been to the good – I realize that many of my characters are as rootless as the sessions that produce them. Maybe my characters would be happier if they came from a more stable environment.

They might be more relaxed, too. My characters are worriers, and I wonder now whether that, too, is a product of circumstance. The time limitations I impose on my writing – 20 minutes on the bus, an indeterminate time between interruptions at the office – manufacture a sense of urgency that I find productive, but do they force the same sense of urgency on the characters?

Of course, troubled characters who feel a sense of urgency sound like the sort of characters I like to read about, so maybe I’m overthinking this. Or maybe I was a sad worrier to begin with.

Adam Thomlison is a journalist in Ottawa whose work has appeared in national newspapers and bus-station bathroom stalls, and has gotten him banned from Parliament Hill. As a fiction writer, he's written one book, We Were Writers for Disastrous Love Affairs Magazine, and edited and contributed to another, These Are Not Movies: Screenplays for Films That Will Never Be Made.

At the same time he's been releasing issues of the ever-more-unfortunately named Last Thumbnail Picture Show zine, now at its ninth issue and twelfth year because he can't stick to a schedule. His even shorter writing also appears on Twitter, @40wattspotlight. Information about all of it can be found at 40wattspotlight.com, or by email at mail@40wattspotlight.com.