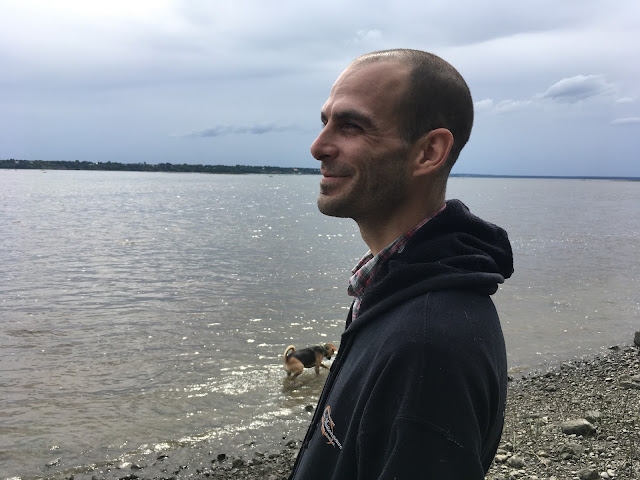 My writing days depend entirely on my working days. What sort of a job do I have at any given time, and how can I squeeze in my writing, plus all the other stuff I want to do: read, hang out with my girlfriend, binge shows, go to the gym, blast music, pollute my bloodstream, go on a trip, smell my dog?

Over the past couple years, a good chunk of my money has been made doing shitty things. Maybe I sweep up a construction site. Maybe I hold some guy’s measuring tape. Maybe I drive to a mall and change all the garbage bags while gagging. Maybe I grout a floor or struggle to smoothly park an enormous cargo van. My feet stink and my back hurts and I’m always cold or hot and fuck this. That’s the sort of loser I became when I left career-life behind.

So when the money’s coming down those various avenues of employment, I get up early to write, because by the end of the day I’ll be too full of resentments to think creatively. I get up at five and leave my dog and girlfriend in bed, where they both look extremely cozy. In the winter, it’s dark. In the summer, less so. I teeter into the kitchen and make coffee. If I’m smoking, I go for a smoke. If I’ve quit, I console myself with the knowledge that relapse is imminent. Eventually, I wind up in my office and I’ve got earphones on and a Word file open. I like long-form music, usually some kind of heavy metal subset, like doom or black metal, but also post-rock, psychedelic rock, or jazz. Anything that has narrative structures and not a whole bunch of vocals. I queue up something like that and then I start working. I do that for a couple hours and then I go to my actual job, and while I’m there I think not about what I’m being paid to do but rather what I’d prefer to be doing, and when I get good ideas, or even just ideas that seem good, I take notes on my phone, some of which later make sense. In this manner, over time, stories are written.

Sometimes, professionalism revisits me, and I find myself sitting in an office for eight hours a day. Maybe I’m an editor in the government. Maybe I’m some kind of communications failure. Maybe I’m pretending once again to be a journalist (just kidding; that’s slave labour). Whatever the case, I’m always shocked at how much more money I make working these sorts of jobs and how little I or most people around me seem to be doing in the process. Each time I start one of these contracts, I spend many long hours fighting off anxiety, mainly because I’m listing like a shipwreck but I want everyone to think I’m an aircraft carrier, and then, after a week, I notice we’re all shipwrecks and no one cares. Bring on the barnacles.

Freed of that anxiety, I bring my fiction to work with me. Once I even had an office door. I kept that baby closed and hidden behind it I worked on what mattered to me and not what mattered to my employer, which was pretty much nothing (they were dicks), and thus the high esteem in which I try to hold my work ethic suffered not at all. Here, as with the labour situation, it’s best to work in the morning, though in this case because staring at a computer screen all day is mind-destroying, especially when that computer screen is filled with actual work, like an offensively detailed spreadsheet or an overcomplicated flowchart or something similarly awful. Look at that shit for eight hours, then tell me you can dredge up even a tiny pebble of creativity with anything less than a cerebral backhoe. Working on personal stuff in an office setting also requires a quick hand when it comes to minimizing windows in the event of a circling manager, supervisor, or meddler. This can be a challenge when earbuds are in and the internet has been plumbed in search of some very loud music. I like to think I’m pretty good at it, but there have been awkward lapses, and, as a result, some people are afraid of me.

So yeah, that’s how I do it. It seems pretty stupid when you think about how much effort it takes to find the time, and further how sharp you have to be all throughout the time you’ve managed to find, because writing is hard and good writing is even harder and if you’re going to take a crack at the former it can be pretty upsetting when you fail to achieve the latter. And yet, unlike grouting a floor, it’s a sort of effort that always entices, no matter its constant state of inconvenience.

Paul Carlucci is the author of A Plea for Constant Motion (House of Anansi; 2017) and The Secret Life of Fission (Oberon; 2013), which won the Danuta Gleed Literary Award. In 2018, Goose Lane Editions will publish The High-Rise in Fort Fierce and two years after that, a novel. Individually, his stories have been published in Grain, The New Quarterly, EVENT Magazine, The Malahat Review, Descant, Carousel, The Fiddlehead, and others.