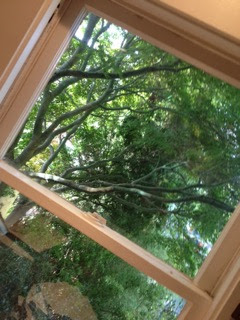 Once, over ten years ago, my writing day took place in the dark. Each night, after I pulled down the shade and got into bed, I turned off the light and took out my notebook for a writing session. I wrote with the light off because I didn’t want to wake my husband who is disturbed by even the dimmest reading lamp. I wrote in bed because I wanted, finally, to be horizontal after a long day (we had a small child, busy jobs, etc.). I wrote in the dark in order to better see what it is that light obscures, to not be distracted by color, shape, pattern, noise, and crucially (it seemed to me) to understand what remains of these things within the darkness of a softly breathing body. I wanted darkness so that I could learn a new language, the language of night, my writing hand moving across the page without stopping, my thoughts untraceable as they emerged, barely heard. In the mornings, when I opened my notebook, I’d find strange, undecipherable pages in my own transformed handwriting—a woven net of words sloping down then up in crisscrossing diagonals, letters shifting crazily in scale and size. Later, when I worked to shape this material into the prose poems of my first book, Flying in Water, I often felt as if I were translating myself to myself, moving from one language (night) into another language (day) and so on back and forth.

For my book Arboreal my writing day was held in the frame of a window. I looked out the window over my desk just as day turned into evening and then night. I was arrested in movement—a paradox—the motion of my thinking contained in the view out the window. Light and thought began to feel similar and I was inspired by how small changes appear to us, what a particular instant of transition looks like, feels like. And so, I began to see the page itself as a translucence that shapes and makes possible perception, while above my desk, the actual window, filled with tree branches, became the scrawled-upon page.

The Secret of White came out of writing days in which I was not writing at all, but instead looking closely at works of art. Sometimes, as at a Bonnard exhibition I visited at the Museum of Modern Art, I might take notes, but when I had the good luck to live in Florence for nine months, I walked the streets and entered churches and museums every day without recourse to paper and pen. Was this “imprinting” of images in my imagination and memory a form of daily writing?

My writing days also change dramatically season to season, as they do for so many writers who teach. During the academic semester when I am keeping up with reading student work, offering feedback, and preparing for classes, I work on my own creative projects in fits and starts. My rhythm changes during the winter and summer breaks, periods in which I often work with concentration for long stretches. However, it can be difficult to shift gears suddenly from teaching to writing, and so I have learned that although those fits and starts—perhaps an hour and half on a Monday night, or a quick pass at a revision before bed—may seem hardly worthwhile, they can sustain the work in surprisingly effective ways. Now, when I look back, it seems as if the poems in my latest book PRE- were written and rewritten in a long drawn out series (over years) of short writing sessions—is that possible?

Within these variations in my writing life, there is one wonderful constancy. Every Friday morning, for more than seven years, I have been writing in company with Nona Caspers, Ann Pelletier, and Jesse Nissim. (At this point we live in different cities and so we meet in a video conference call.) We spend three hours writing together. At times we give each other prompts, at other times, when we are immersed in our ongoing projects, we simply keep each other company as we write. Usually, one or two of us will want to read something we have written to the others, so we stop and listen to the raw or revised work and respond, not in critique, but in conversation about what we heard in the writing. These Friday mornings spent with my writing partners are at the heart of my creative life. The inspiration, care, and attention they offer accompany me whenever I write, whether they are present or not.