Bola Opaleke : MY WRITING DAY (OR NOT) 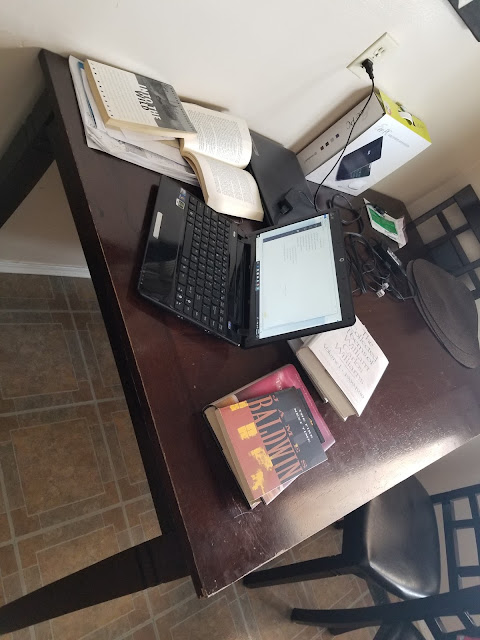 It would be hard to say anything worthwhile about 'my writing day' without going a little autobiographical. Born in the early seventies, in Nigeria where almost everyone had forgotten such a thing as Democracy existed, I grew up in the collective regimented life of a people who go to bed and rise at dawn with infused fear of the 'boots and the gun'. The flagrant injustices, the cold helplessness bolting out of every parents' eyes, and the steaming whisper of "when you see the soldiers on the street, run back home as fast as you can" in our ears each morning we set out for the long walk to school, lurks in my dreams even after the Military left the corridors of power in 1979, and again in 1999. The poverty of a people blessed with (plundered) natural resources makes almost everyone here a candidate of Depression. The rape, the murder, the Police and Military brutality, the oppression and suppression of rights and voices, all at a very close range. The extension of that in a different yet acidic version is the racism against people of color in North America and elsewhere in the world. All these combined to craft my words into a peculiar voice. Picking up a bitter pen early in life, writing seems to be the only place where I can both laugh and cry at the same.

Earlier, a typical writing day for me was never in the library or a classroom corner but in the open field closest to nature. Nature, however, was not the reason for my choice. An open field afforded me the opportunity to notice any potential aggressor/assailant from afar and to be able to plan an exit strategy before it's too late. At night, I could stay awake and think about all kind of stuff to write, and pray I remember them in the morning because with about six or more folks in a single room, me clutching to a pen and a paper, staring into the ceilings for tenses that parse is not what anyone in that situation wants to do. I wrote my earliest poems from a place of immense darkness, from bitterness and anger at a society that selfishly makes its own sunshine and outlaw any form of light for us, the underprivileged. In essence, I wasn't a writer at all. I was a lamentor and so had no "writing day" in a real sense.

When I moved to Canada in 2011, everything changed (or at least a lot of things changed). First, I was able to self-publish my first poetry collection 'A Note From Hell' - a collection of poems written in my teenage years (including poems written as early as when I was 11 years old), by a US publisher in 2012. After that, I started musing on the idea of actually becoming a writer. So I would pretend to be a writer by surrounding myself with books, leafing through them slowly and jotting things down. That soon became real after I got a job as a Youth Care Practitioner, working night shifts mostly. As all the kids settle in bed, completing all chores and paperwork, I would, in turn, settle in front of the computer, reading and writing all night. This gift of silence, for me, provided by the enclosing serenity was always immeasurably satisfying. I would speak to the walls and wait for them to speak back to me without any prying eyes calibrating the level of my assumed mental in-balance. Sometimes, I even role play in a bid to conjure up inspiration. The blessings of the night had often found my fingers. Many of the poems I have published, all over the world, in Europe, US, Canada, Africa and elsewhere were crafted on such a night as this. Strangely, I think the god of poetry is nocturnal (no pun intended). She moves around mostly at night.

Finally, for me, a typical writing day/night is not all about writing. It is also about reflecting on things already written or unwritten. It is about tickling all dying dreams or ambitions. Mostly, it is about chewing other people's work, swallowing the part I want to make my own, and spitting out the part that might be indigestible in my system. In this sense, weirdly, at home, my couch (not desk) is my office. And my typical writing day is a potpourri of movie time, soft arguments, board games, and sometimes chasing my four-year-old kid around the house because he would not stop disrespecting my "office", throwing my pens and papers all over the floor (okay, maybe I do that too), and stealthily taking my laptop back to my room even though I have schooled him several times about the kitchen table being its natural habitat.

In Brief:
Hot Chocolate (no coffee): a cup a day
Hours at desk: about 4, if at day (night) job
Twitter: writing partner (laughs), keeps me company while writing
When idle: swim with sharks (in my head).