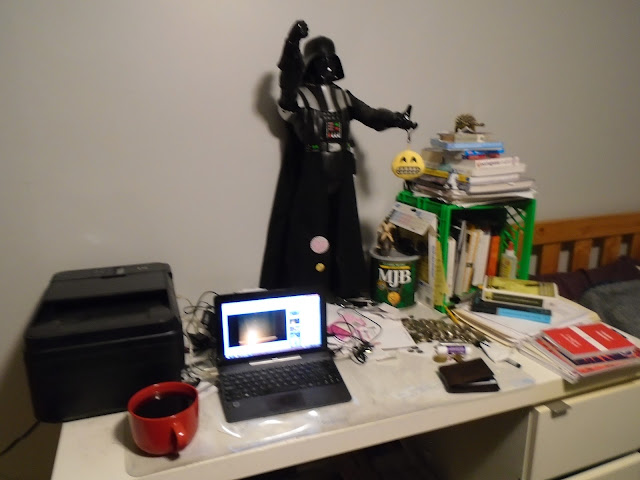 I’ve never had a schedule to follow for my creative endeavours. If it feels like I should punch a time card before I get started then I’m not going to be interested. My writing comes and goes in impulsive spurts. When I have a vague idea of a topic, person, place to write about I’ll scribble down notes over weeks, months, until I have a pile of ideas to piece together.

I think I understand why people try to write every day, or every weekend at least. They want to flex the creative muscles and keep in practice. If I were to try this, I’m scared I’ll end up with a heap of trash writing and filler. And that time could have been used for something else constructive and genuine. I’d rather not pick through garbage to find something salvageable.

My approach is more like the university student that fucks around and slacks off then has a cramming session a few hours before an exam and ends up with a C+. I come in with an idea and sculpt it so I have a basic form, then chisel away until I’m left with the closest thing to what’s in my head.

With fiction I need an ending before I can even think of starting. I need a destination to arrive to before creating the road to get there. At times the road is a Super Highway, other times it’s barely a cow path. Poetry, if I have a concept, I’ll meander around the concept with no end goal in mind and drift along aimlessly until I’m satisfied.

When I’m not working on writing poetry or fiction projects I use my free time creating vispo, asemic work, studying languages, playing and learning musical instruments, reading, watching movies.  All of these activities come in short flashes. I’ll write for a week, then not write for several months. At that time I’ll study a language for a few months to drop it and concentrate on playing and recording music. Then not touch any instruments for four months or so because I’m binge watching movies or a series (which is research for writing sometimes), then return to writing again for a short while.

For the past few years I’ve been lucky enough to live alone and stay single. This has given me so much more free time to pursue my interests. I have a tiny abode in a suburb of Victoria, BC to myself that’s quiet most of the day and afternoon, and I work a mundane night job where I can daydream and mentally go somewhere else. Thinking about whatever I’m working on at the time while doing repetitive tasks.

Inspirations, or whatever you want to call them come from things seen, read, heard or overheard, riding the public bus, in the shower, films, other books, other genres. Keeping the senses open is one of the most important parts of the writing itself.

The act of writing, when I’m ready to put it all together, lately happens during layoff periods, statutory holidays, whenever I have a few days to stay indoors and pound away at the keyboard. Mostly this happens at home now, though when I get shack-whacky and need to go outside I’ll head for the library, a café, take my laptop to the laundromat, someplace with caffeine, with my headphones jammed in my ears to drown out the local fauna.

I read somewhere, someone’s writing advice -- that they would stop at a climactic point and pick it back up the next day. I’ve tried to do this and was too committed to make it work. It’s like watching half of an exciting movie and going to bed without watching the rest of it. When I get started on something I plow away at it until either I’m finished or stuck somewhere and I can’t do it anymore. I’ll forget to eat and keep typing until my head aches, I’m all jittery, and I can’t see straight.

Over the past year I’ve had more luck publishing my visual works than poetry and fiction. I’m not sure if I should exploit this or it means I need to focus my energy more on writing.

Robert Keith is a persona that works with visuals, texts, poetics, fiction, and exophonic writing. He is the author of four collections of poetry, and six chapbooks. His collection of Visual poetry Chicken Scratch was published in 2017 (eyeameye books) His visual work have been presented in galleries in Canada, Malta and Russia. Forthcoming is his 1st novella in 2018.