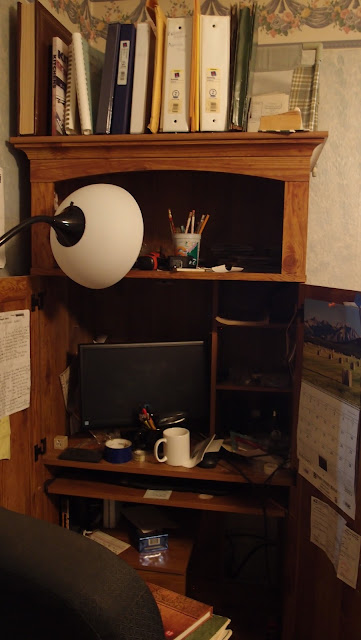 It's been three days into a sultry hot of the Red River delta that prevent open windows that allow the outside in...owl calls, whippoorwills, coyotes, and train whistles. I've been on rest and recovery from a recent fall walking my dog, and the Rx was the farm, and my root-doctor/midwife Great-grandmother's cottage, as my house in town has three flights of stairs, and that's not advisable in recovering from new falls in spinal disorders.

I was awakened afore daylight by the mowing Reverend.  I decided at first against the rocking chair on the screened porch; I settled for the back window in the study which is amassed with books I'm organizing from my deceased father's library three blocks away...country blocks. The good Reverend was gone before I took Fritz out to mail his morning letters. I considered icing my java, and told myself, Honey, it is only mid-May.

I backed my ears back, closed the gate the hurrying Reverend left open, and had that coffee on the porch anyway. Read my morning devotional. Said my prayers. Responded to a text from my Mother. She informed me I'd better scoot on up to Dad's library and finish up with the books, maps, letters, and all his treasures before noon. And, it is mid-May. Okay. I did as directed.

One last look around the haunt, the wisteria prayer closet out of doors, dripping still; rifled through the trash pile once again, and salvaged a tin tea cup with a candle, an ancient mallet, and watering pitcher, so I loaded these along with my Dad's materials from two books published (one of which is a permanent installation at the nearby museum & was nominated and short-listed as a Smithsonian Traveling Exhibit), and one I'm supposed to finish on fire towers of the Southeastern Oklahoma hills. He set the bar pretty high. By the time I get back to the cottage I have not a dry thread on me, and realize I have a fresh load of sand fleas. Ayup. What to do when? Unsure, I shucked my clothes and threw them out the screen door and headed for the bathtub. 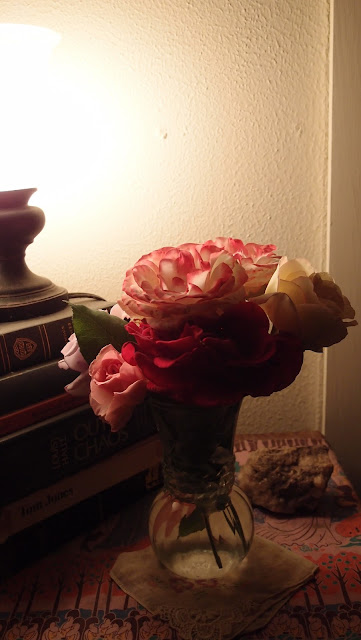 Fresh as a daisy again, I checked email. Checked the Submittable box for my magazine Abstractmagazinetv.com. Responded to an anxious Pushcart Prize winner...chose a poem and art for publication on May 21st, and another set for May 23rd. Nothing like running just nearly behind. By noon thirty I'd heard from my Mother again that I needed to call the Oklahoma State Bureau of Investigation Investigator back, that she'd just spoken to him, and I should wait two hours. I considered doing this in my fresh as a daisy nightgown after my flea freedom, but decided on a blue long sleeved collared shirt. I rang him up; he had to pull over to take notes, and I just shipped my best friend to a job in G-dforsaken Ardmore.

I responded via email to an artist outlining what "washed out" means in old school photography, and made some suggestions, and accepted a few new pieces of art. I've been working on publishing a serial memoir by Warren Wright the brother of my mentor C.D. Wright, and he wants me to find a photograph of a railroad bridge over in Cotter, Arkansas, spanning the White River where their cousin "Splash" Collins fell off the train and into the river. I asked if he survived, but have yet to get a clear answer. It was near drip in my thatch-eaved kitchen by then, and decided I'd have to wait to find the place Splash landed later. Java on ice would be mighty nice, and I was trying real hard not to have to bathe again before sundown.

I often forget to eat. Today was no different. As usual, consume the thing in the fridge that would go bad first. In this instance an asparagus omelette built by Mom. Went to the study to organize some historical documents, filled one box and shut it, and that was aplenty for today. I'm here on rest and recovery....yes, that's what it is called...light duty. My dog Fritz had several little jaunts with me hurrying him right along, and as a Bichon Frise whose wearing a full coat, he didn't argue with me.

Mother had been to the cancer clinic in Paris, TX for a port flush with a friend today, so tonight would be burgers from Braum's; though I'm Kosher with the Kosher, I eat meat with carnivores, sometimes. Today, I did. We compared notes on our OSBI interviews, she brought me a cantaloupe and bananas from the market fifty miles away.  I moseyed back over to the cottage, and it is still dripping sultry, and I will manage with only having had to take two baths.

I wrote nary a poem, but I enjoyed the view of Steven's Creek bottom as I washed dishes. I helped a writer or two, an an artist or two, and did my job as editor on a very low key basis, as my Dad's library and how I'm going to make room for it are at the top of my list. Now, it's nearing 9 and maybe down to 80, and I'm thinking I will catch that coal train as it rolls in from Wyoming to power the lights I read by, and I will catch the owl calls, and whippoorwills, and rise early tomorrow, hopefully, and do something might near the same.

JL Jacobs, MFA, Brown University, is the author of four volumes of poetry. Work has appeared in numerous journals including Ploughshares, New American Writing, and New Orleans Review. Representative work is anthologized in American Poetry: The Next Generation, Carnegie Mellon UP. She was a 2017 nominee for Poet Laureate of Oklahoma. She studied with C.D. Wright, John Yau, and Keith Waldrop at Brown, and has continued a mixed-media artist practice from teaching Poetry&Image at Brown Learning Community to offering mixed-media workshops at OKC Literary Festivals. She has offered her work from Coffeehouse Exhibits to Deep Step Come Shining with C.D. Wright & Deborah Luster, Poet’s Theatre, NYC.