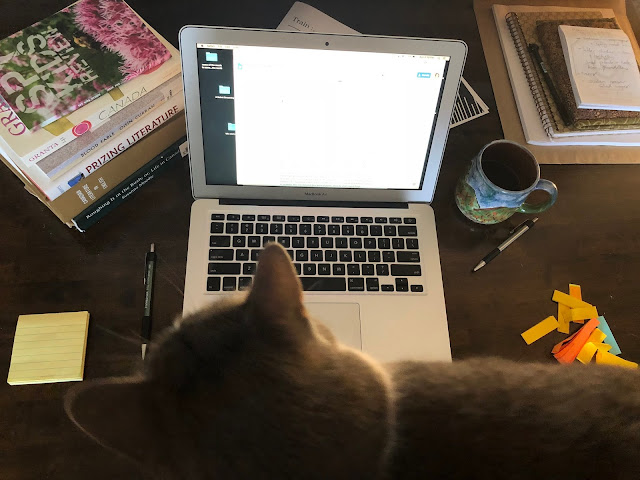 It’s the morning after the Ottawa Small Press Fair and I wake up early, around eight, after weeks of sleeping until noon.

I live with—I’m in love with—a bartender, which often means living, loving, bartender hours. Often I’m awake until one in the morning, two. Sometimes it’s nice to sit in bed so late, so awake, scribbling fragments of poems or essays into my computer. When my favourite bartender asks me what I’m doing, I call it doodling. It’s not quite serious but not quite a joke— practice for something, or maybe nothing at all.

Other times, staying up into the small hours of the day becomes too quiet—the weight of the unfinished day hanging over you, like a dreamcatcher, like Damocles’ dagger.

I’m poorer than I’ve been in a long time, which is another dreamcatcher, another Damocles’ dagger above my head. I want to write about how lucky I’ve been, about the sense I feel more and more that my poetry is getting somewhere, building itself into something. Some days I sit on my balcony and watch my pepper plants waving in the breeze and the whole world smells like vanilla, like possibility.

But those are only some days, and even the best days days still feel like being poor, like living in a house of anxiety. I want to say anxiety is just another kind of luck, that even bad luck can amount to something, but that feels too glib, even for me.

I set the kettle boiling for coffee and I sit at my table to wait, thumbing through Duolingo on my phone, haphazardly learning Dutch. Het grote dier? Ja, het is een grote dier. I’ve been fooling around with the idea of making some kind of found poem out of these pieces, the ways my brain wants to fill in the cracks of them. Dat is leeg. Mensen zijn zoals schapen. In a podcast I listened to yesterday, beni xiao defended these kinds of poems, about the small, stupid things.

“I’ve seen a lot of riding-the-bus poems, and a lot of Tinder poems, because that makes sense, because that’s what we’re doing,” they say. “My understanding of poetry is just that it’s supposed to be about feelings, you know? And feelings are dumb. So my poetry’s dumb.”

I like that idea, about writing through and about these small moments that fill the cracks of our days. That feels right to me.

The kettle boils and I wait for the French press to steep. Am I addicted to the caffeine, or to these small rituals, the small comfort of pouring water over the grounds, of pouring coffee into a mug?

Yesterday was a day that smelled like possibility. The Ottawa Small Press Fair was invigorating and insistent, like a leavening agent—something slowly rising overnight in a covered bowl. Every line of poetry and every chapbook and every broadside is an assertion that not everything has to be garbage, that things can be better. There are concentration camps for children in the United States and the people who hid Anne Frank in an attic were breaking the law and still I want to believe that things can be better. Poor as I am, I buy two small notecards with lines of poetry on them: It is the Year of the Ram. / It is a good time for poetry. / It is a bad time for being happy.

I used to think poetry could only come from misery, but now I want to believe poetry can come from happiness, too. It is both easier to believe and harder to accept this idea, now, when I am so often miserable, and so often at a loss with myself and the world. I feel like I haven’t written anything good in months. I feel like most poets feel this way.

There’s something beautiful in the branch of a pine tree, cut down by a City of Ottawa worker and left on the sidewalk, which I pick up and carry home to my apartment.

“What’s this for?” asks the bartender, this man that I love, when I set it on our table.

“Poems,” I say, and he nods as though that makes perfect sense.

Dessa Bayrock lives in Ottawa with two cats and a variety of succulents, one of which is growing at a frankly alarming rate. She used to unfold paper for a living at Library and Archives Canada, and is currently a PhD student in English, studying literary awards and the production of cultural value. Her poems have appeared or are forthcoming in IDK Magazine, Cotton Xenomorph, The Maynard, and Spy Kids Review, among others. You can find her, or at least more about her, at dessabayrock.com, or on Twitter at @yodessa.