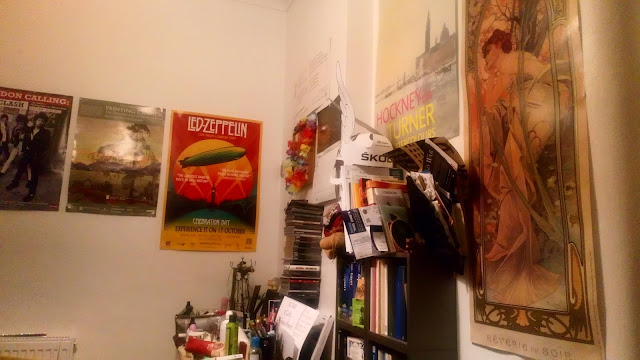 Writing has been an essential part of my identity for over 30 years (I started very young). At the same time, writing has never really been my career, or my life’s focus. Writing happens sometimes, often, frequently, occasionally, most days, not for ages. This means that I have had countless writing moments in my life, but few “writing days”, and certainly not anything I could describe as a “writing schedule”. (This is also one of the reasons why, around 20 years ago, I found myself turning away from the idea I’d long held of being a novelist, and focusing increasingly on poetry.)

As I’ve worn many different writer-hats in my life, I’ve found that all of them have involved a different approach. Deadlines are probably good for me, but I wouldn’t want them for everything. I have definitely had “writing days” when doing freelance work: these might look like an afternoon researching and writing at the British Library, or at the Refugee Documentation Centre library in Dublin. But in recent years, what I mainly write is poetry, and a blog about poetry. And for me, both of those only come from moments, which stretch into thoughts, which stretch into persistent thoughts, until pressure builds up and writing happens.

I often write when I travel, or after a trip. Travelling brings me into freedom and attentiveness, and the ideas, the hooks, the nudges which lead to poems often start pretty quickly on a trip. I have joked that taking a trip is an expensive way to get a poem or two. But it usually works. The last time I started writing a poem (as yet unfinished), I was walking on an immense beach on Amrum, in the North Frisian Islands of Germany, with the wind hissing sand over my feet. I started making notes on my phone as I didn’t have a notebook. That was the moment. I had a similar moment on Parliament Hill in the summer, but I’m not sure yet what’s going to happen with that nascent poem. After this happens I think about those poems every day. They never really leave me, and that’s one way I know that I should (sooner or later) write them. Equally, I sometimes engage in a kind of brinkmanship where the genesis comes, and perhaps a few lines come, but I don’t write them down. I just keep thinking about them. It’s quite possible that this is stupidity, laziness, fear of commitment or something else equally delightful, but I also wonder if the pressure can be valuable: by “pressure”, I mean something like how the pearl forms in the oyster. And I have realised that a lot of my writing work comes from my mind chewing over things in the background, sometimes consciously, but often very much out of sight until something surfaces.

The upshot is that I’ve written on the couches at London’s Southbank Centre, surrounded by a nest of bags, books and mobile devices; in a Luxembourg hotel room; in a café in Geneva, drinking an expensive coffee during a snowstorm; by a pool in Cairo in 40 degree heat; on a stone bench by the river in Battersea Park; and sprawled awkwardly on my bed (I do not have a writing desk). Moments such as these make up my writing days, hours, minutes and seconds.

I recently came across the following in an interview with the late Lucie Brock-Broido: “The Polish poet, Zbigniew Herbert, says there are two kinds of writers: cats and oxen. The ox is plodding and deliberate, and goes back and forth and back and forth and line-by-line, and dutifully plows his acre by the light of day. And then there’s the cat—who’s sleek and nocturnal and furtive and has sporadic leaps at writing. I am one of those.” I too am the cat in this scenario, and Brock-Broido (and Herbert) said it better than I ever could.

Clarissa Aykroyd grew up in Victoria, Canada and now lives in London, England. Her work has appeared in publications including The Interpreter’s House, The Island Review, Lighthouse, The Missing Slate and Strange Horizons, among others. She has twice been nominated for a Pushcart Prize and is the author of a blog about poetry and poets, thestoneandthestar.blogspot.co.uk