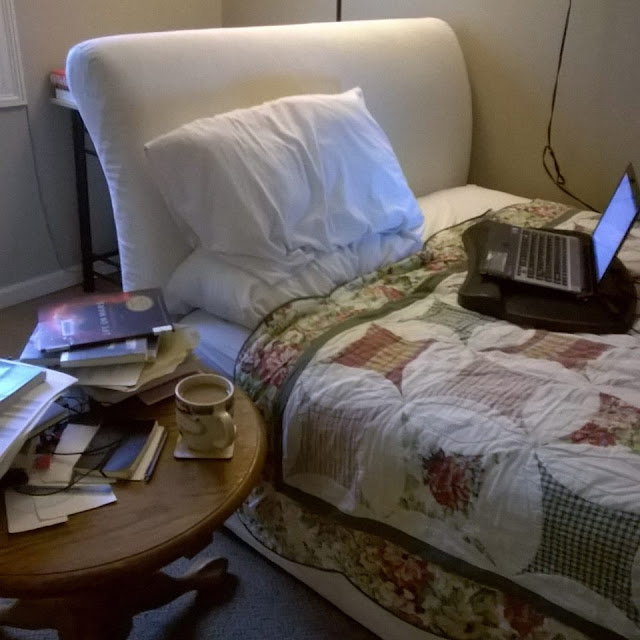 My bed is my office. I have back trouble, or at least that’s my excuse for writing propped against a padded headboard, pillows plump in support of my lower spine, my feet up on a mattress firm enough to bounce well-balanced line off. Rather than prop my aging laptop across my ditto thighs—which are usually bare because this is Louisiana, where wearing pants is purgatory—I use a lap-desk. On a table next to the bed I keep stacks of books relating to projects I should be working on, including my dissertation. Also, my phone, and a mug that’s either full of tea, or about to be. I have never broken my British habit of drinking hot tea with cold milk as often as I can make myself get up to boil a kettle. Which is often. I love a good cup of coffee, but tea is my fuel. I can’t write without it.

Honestly, I can barely write out of bed these days. As the world spins every which way, trying, it seems, to shake off what’s left of our humanity, I cling to my keyboard and type. As the planet spins, as my old white head spins, shamefully, I try at least to find words of regret, words of well-aimed anger, words of courage. I hope for hope. My fingers can still be hooks.

The word or phrase, the inchoate notion, that begins a new poem may take me anywhere—but this is disingenuous. I have an agenda, and that agenda is always political. To stay focused, and angry, I check in with the outside world at regular intervals. Which is not to say that I actually talk to people, or leave my apartment. I’m engaged with the world, but that doesn’t alter my deep love of my own company, nor my need to avoid distraction on writing days. Sometimes, needs must, I still write in coffee shops, airports, parks—always aware of my aching back, and the chatter of unknown voices—but my best lines come to me when I’m sitting propped up on my bed, in my underwear, with no one to challenge my devotion to solitude. I don’t play music as I write, because I can’t then hear the music inside my head, the music that stops my head spinning. On a good day, the room will go dark, except for screen glow, and I will type on, oblivious.

Back to the beginning. After I’ve made tea, listened to the radio, caught up on social media, and made more tea, I convince myself that, in spite of the news—because of the news—I should do some work. I type everything, because I can no longer read my own handwriting. I taught myself to touch-type when I was eleven. I had a portable typewriter back then, and I hammered those mechanical keys, strong in my conviction that words mattered, even if I didn’t. I would be a writer, for sure. What I actually became, in the short term, was a fear-ridden teenager too caught up in getting from one day to the next to commit any part of the struggle to a sentence. The next couple of decades, ditto. I made it to middle-age, though, and finally, after flirting with prose forms, became a poet in my fiftieth year.

At sixty, I’m a fast but inaccurate typist—I type like a programmer, constantly correcting myself, but I find such toing-and-froing to be an accurate model of how my mind works. When I sit down to write something new, I either grab a phrase from my fragments file, or scrabble fo something from the oddment drawer that is my short-term memory. That drawer is always stuffed, the oddments spill out, and if I don’t write them down, they will be lost to me. I’m okay with that. I don’t feel like I’ll run out of ideas, nor do I feel that anything I write is word-for-word precious. I throw some words on the page to erase the blank, then edit as I go until I have a first draft worth contemplating. For as long as the file is open, I can undo, of course—but once the file is saved, my workings are lost. Nice irony, the poet in me feels compelled to mention. But the sixty-year-old who travels light says, good riddance.  Old notions are excess baggage.

Most usually, my writing day begins, not with a new poem, but with revision. From the drafts that seemed worth saving, including those I’ve forgotten, to the already-published work that no longer feels right, I get my biggest kicks out of rebuilding. Many of my poems turn out to be fixer uppers, but a well-designed addition, or even a slap or two with the paintbrush, is for me the best part of being a poet. A single page, not blank, but filled with possibility. Re-visioning feels hopeful. And once the changes are saved, once again, no earlier drafts exist—except those that have already been published. We are our past, but we don’t have to live there.

Would it surprise you to know that, twenty years ago, I quit my old life, walked off the lot, and did my best to disappear? Or that several years later, when it looked like I might finally get into print, I changed my name? No earlier drafts exist, except those already stuffed into the oddment drawers of other people’s memories. If I hadn’t broken up with my past, I would never have become a writer. Do I mine those years for material? Of course. Do I live underground with my memories? Not if I can help it. Writing helps. Wanting to change the world helps. At least I can try.

Jude Marr teaches, and writes poetry, as protest. They are currently a PhD candidate at the University of Louisiana at Lafayette, and their chapbook, Breakfast for the Birds (Finishing Line), was published in 2017. Other recent credits include Nightjar Review, 8 Poems, and Oxidant Engine.