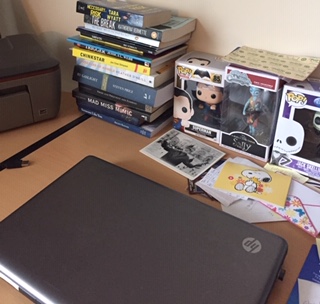 After I wake up dreaming about writing, I go to the gym, have tea and breakfast and spend the day writing and thinking about writing. I’m living the writer’s dream. Nope, it’s actually what I thought my writer’s life would be once I permitted myself to write. Then again, I used to think that being religious would get me into paradise. Both of those beliefs would change in time.

Ma was a poet, but little of her work remains.  I write non-fiction and tread a little in autobiographical fiction. Ma and I are more the same than different, I’ve only realized that recently. My father tells me that I look like her and my sister freaks out when she sees Ma in me. When I left home at eighteen, Ma and I parted as strangers. It's a theme I often struggle with in my stories. My father tells me that Ma tried to get her poetry published, but it got rejected. I don’t know what her writer's life was like at all and it saddens me. She never talked about it. She took writing courses at Concordia, and I wonder if she ever finished high school. I didn’t know much about her writing life back then. When my work gets accepted, I’m grateful for these gifts. Maybe Ma is telling me she approves of me when songs she once loved come on the radio. A wave of happiness usually passes through me in those moments. Maybe she forgives me for not having a relationship with her before she died. My brother says she understood. I know that this is the grief talking, but even grief needs a voice now and then.

I tend to do this with my writing, start at the beginning, and then my story falls off track. Or goes into a different direction then I intended. I usually have a polished first paragraph. I revise over and over again. The words shredded, diced, and tossed out. They may appear in other stories or possibly never but I know that they’re not wasted either way. I can picture my therapist Muriel saying, maybe it’s okay to fall off track to get on track. She may be on to something.

I quit my full-time job after almost twelve years to pursue writing first. I hope Ma would be proud. I know that I couldn’t have done this without the support of my husband, my step-daughter, therapy, friends and family and my beautiful writing community. I work part-time in a non-writing job and I write in the in between.

When I'm not working, I sleep in like a teenager. I am not a morning person. Before my first tea, I am barely awake, and if I even attempted morning pages, those words would be as angry as my face and hair look. After tea, my hair also calms down. Even so, it didn’t stop me from trying them out at least once. On the let’s-attempt-some writing-today-days, I have my tea, a little breakfast and watch the news, do a few chores. Only then can I even start to think about writing a bit. But sometimes a writing day doesn’t even involve writing. It can be the conjuring or the percolating of an idea or maybe even a few words. Badly scribbled words on the many gifted notebooks I’ve received from friends that love me, believe in me and my words. My writing community has had such an impact on me; online, emails, texts or phone calls. There were times when I wanted to give up writing altogether. I used to think that all writers could just sit at their desks and the inspiration would take over. Then presto! out came a book.

I need to read in my genre of non-fiction but also outside of it. After finishing The Writer’s Studio out of Simon Fraser University, I’ve still kept up with a mostly regular reading schedule of books and essays.  I usually listen to podcasts like LitMagLove, Can’t Lit, Fainting Couch Feminists and Bookish Radio. Sometimes I leave movies playing just for background noise like Blade Runner and even Blade Runner 2049, Jane Eyre, Pride, and Prejudice (yes, the almost six-hour version!) or Superman (any of the Supes movies will do!). I often play lots of music like pop, country, sometimes classic but mostly alternative will do. I re-write a lot and go back and fix stuff even if we’re supposed to keep going and go back later. It takes a very long time for one of my stories to present itself to me. I may begin it and leave it in limbo for a while.  I scribble notes in several notebooks only to try to remember where I put this one note or that one. My best ideas seem to come out of impromptu prompts. Carrianne Leung held a workshop, and some great ideas came out of it. When I took Ayelet Tsabari’s non-fiction classes many of her exercises helped me glean several story ideas.

When I attended the Humber School for Writers, some advice from other writers was to get out there and live your life and write. What? I thought, it’s not about writing alone in your room? Wouldn't that be the ideal life for any writer? It took me a long time to realize that it’s not my way. It can work for others, but it was just as important for me to figure out what works for me. I can't sit at my desk every day pounding out word after word. Sometimes it’s taken me months to work on interviews, and weeks for a blog piece and I spent about five years on a novel I am no longer writing. I need outside inspiration to write and space in between writing.

My husband bought me an L shaped desk. It’s full of my figurines, books and a mess of papers and my old computer. I don't spend lots of time there anymore, but it was my starting point. I mostly write from my bed or the kitchen table these days. My routine may shift if I ever get a room of my own to write in. For now, you can find me not too far from the tea kettle.

Tamara Jong is a Montreal-born mixed-race writer of Chinese and European ancestry. Her work has appeared in Ricepaper, Room, and The New Quarterly's Backstory. Her work is forthcoming in Emerge 18 and Body & Soul: Stories for Skeptics and Seekers. She recently graduated from The Writer's Studio (Simon Fraser University).