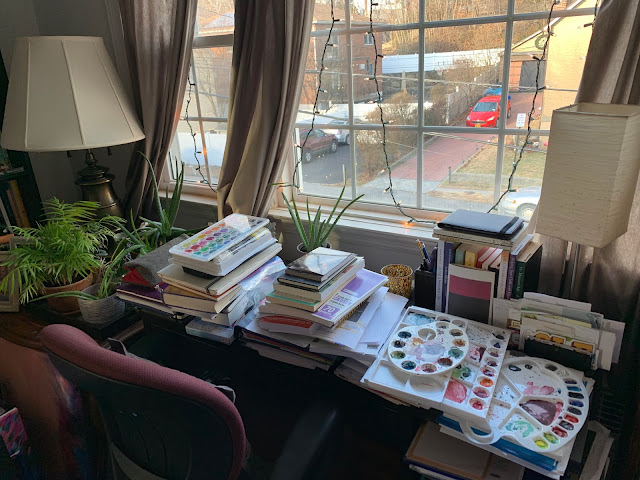 It feels futile to describe a typical writing day because I’m not writing much lately, and days themselves pool together like watercolors (thank you, parenthood).

In 2018, I drafted about twenty poems, some of which showed up suddenly and demanded my attention until they were completed; others roamed around my mind for weeks or months, ambling toward closure; and others were long-distance friends who visited occasionally but eventually stopped coming over.

That said, I don’t monitor my productivity in any meaningful way, and I don’t panic when I enter a slower period. I’ve learned that fighting it prolongs it. And I’m in a slower period now. A winter.

The story of my writing life is the story of discovering and accepting my process, and that process is comprised of seasons. These seasons, however, last longer than a few months each. A recent spring went on for two and a half years. Previous winters have stretched well beyond that. This winter is maybe six months old.

After I graduated from an MFA program a dozen years ago, I taught high school English, working 70-80 hour weeks. It was physically exhausting and intellectually draining. Eventually, I transitioned to a nonprofit, but the demands of my job, along with a volunteer editorial position at a magazine, made a regular writing schedule impossible. In the midst of all this, my poems were undergoing a significant stylistic shift, and I felt (necessarily, though it certainly didn’t seem that way at the time) like I was flailing.

Several years of struggle and failure and intense self-doubt finally gave way to my first true spring as a writer (meaning post-MFA, a degree that I regard as my apprenticeship). It was… astonishing. I was a new mom and had left my job to care for my child for reasons I won’t detail here. My mind loosened, and I had no energy to devote to inhibitions and insecurities. I wrote out of total emotional and mental necessity, and doing so helped me preserve an essential part of myself while the rest of me rapidly changed. It was as if I had opened a window in my imagination and discovered I could fly out and return at will.

I wrote my first book in a few months (rather, I revised older work and wrote newer work and stitched them into a functional full-length in a few months). It won a contest later that year. An initial draft of my second manuscript was done a year or so after that (it was subsequently heavily edited and is currently looking for home, but still, the house had been built). Then another big stylistic shift began, my poems pivoting from surreal lyrics to bare, unflinching narratives. And then this slowdown commenced.

Please believe me when I tell you: I am at peace with it. It’s an important part of my writing process. It coincides with (or perhaps not?) my taking up painting, a childhood love, again. I’m untrained and have absolutely no ambitions for it, which is wildly exciting. The impulse I used to feel to write poems is instead largely directed toward canvases and paper. (Though not entirely.)

My paintings relieve the pressure on my poems, and together, they relieve the pressure on the rest of my life and keep me in dialogue with myself. When I think about how many people I know who’ve never found a creative outlet, whether it’s choreography or coaching or cooking, I appreciate anew how deeply fortunate I am, regardless of whether I write two poems or twenty poems or one hundred poems a year. What matters is that I somehow manage to write poems.

Elizabeth Onusko is the author of Portrait of the Future with Trapdoor (Red Paint Hill, 2016). Her work has recently appeared or is forthcoming in The Sun, Bennington Review, Columbia Poetry Review, The Southeast Review, Poetry Northwest, and Tupelo Quarterly, among others. She edits Foundry, and her website is elizabethonusko.com.