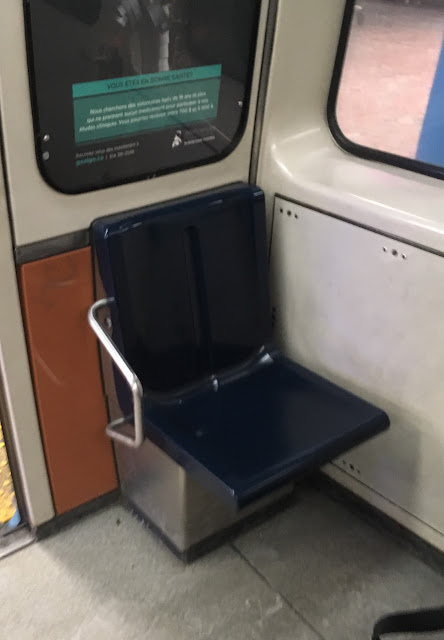 To ensure I make the first metro, I am awake shortly before five am. I shower, eat, check the weather, apply layers, then brave the snow. I count the people I pass as I make my way to the station. As I’m pushing the revolving door and feel the air rush past me, I whisper the number. Today’s is four.

I note that one of the escalators leading to the platform is still under repairs. I have several minutes to wait before the metro arrives, so I sit and dig out a book from my bag. I admire as best I can the skill at which Charlotte Brontë uses a semicolon in Jane Eyre.

There is a roar, lights against the wall of the tunnel, the train appearing and coming closer, a pale light on the face of the driver, a strong rush of air, and then doors passing by me. It will be the next train car. No. That car will stop in front of me. Okay, it’ll be that one. A car stops, its doors open, and I get on.

I sit in the back, where a window sill allows me to rest my head in my hand comfortably. I continue to read, but I realize I am being unfaithful to the experience. I am reading the words, but without comprehending them. The book returns to my bag. Of the twenty or so people in the metro car, I recognize a few from their coats. The man yawning behind a gloved hand, the one who will get off at the next stop, is wearing a new toque.

My eyes blink at a rate which accords with my breathing. Slowly. I am thinking about the status of the human will when writing poetry. I am wondering if the dissolution of will is key to good writing, and whether this dissolution is itself an act of the will. I am wondering if the will is something which can be turned down, like the volume on a stereo or the heat of an element. I am thinking that if intention is the target of will, then poetry is the will unaware of its target. I am thinking it is just like sleep or faith. I remind myself that I am not religious, that I am sleepy, and that my connection is at the next stop.

I am standing on my final train, thinking that inspiration is a catalogue of things we are feeling or have felt which we draw upon somehow without using intention. And I am thinking that we attribute this to an external source because it is easier than acknowledging the possibility that we don’t fully know ourselves. I remind myself that I think through things by writing poetry. But how does one write a poem about intention sans intention. I am feeling pretentious. I am wondering if there was something to that idea of sleep.

I am walking out of the metro station, back into the snow. There’s a possibility that we don’t have the call numbers for all our real and imagined experiences, but that doesn’t make them inaccessible. They’re not closed stacks. I say the words again, this time aloud for the sake of the empty street. I arrive at work before the sun shows itself. I read a few more pages of Jane Eyre, then clock in.

I am home before five pm. I put on the kettle and begin a pot of rice. I sit down where I typically write.[ii] I start the poem which began on the metro that morning. My partner arrives home, just as I am thinking the vegetables are ready. I say that I had a good day but that I am tired. But it’s okay because I’m writing a poem about it. While we are eating, she says she wants to read it. But I say no, it’s not ready. It’s undercooked, like the rice. It needs a little more time in the Metro.

M.W. Jaeggle is a poet from Vancouver, currently based in Montreal. His writing has appeared in Train, The Dalhousie Review, untethered, (parenthetical), in the anthology Refugium: Poems for the Pacific, and elsewhere. He was long listed for the 2018 CBC Poetry Prize. A chapbook is forthcoming from Baseline Press. He tweets rarely @underapricity

[i] Later, I will track down where I read Moritz and find the following from a 2018 interview he gave with James Lindsay for Open Book: “You realize, as a poet, that the argument, whether there’s inspiration and intuition and a connection to and communication from “the beyond”, or whether on the other hand there’s only intentional planning and construction, is in fact silly, although the very nature of reason limited to rationality, logic, and planning automatically creates this false dilemma and can’t avoid doing so.”

[ii] An admittedly unremarkable room painted in contractor’s white and furnished with one white table, two black office chairs, and the cat’s litter box. On the wall above the desk are five greyscale images salvaged from a water-damaged art history book: Hendrick Goltzius’s Study of a Tree; a photograph of early twentieth century art dealer Ambroise Vollard at a desk surrounded by rolled canvases; a photograph of Cézanne’s studio strewn with sketches on the walls and objects on every flat surface; a painting by Maxfield Parrish of a man wearing a polka dot cape and reading on a stool; and finally, a woodcut image of a triumphant Puss in Boots by Gustave Doré.
at January 29, 2019