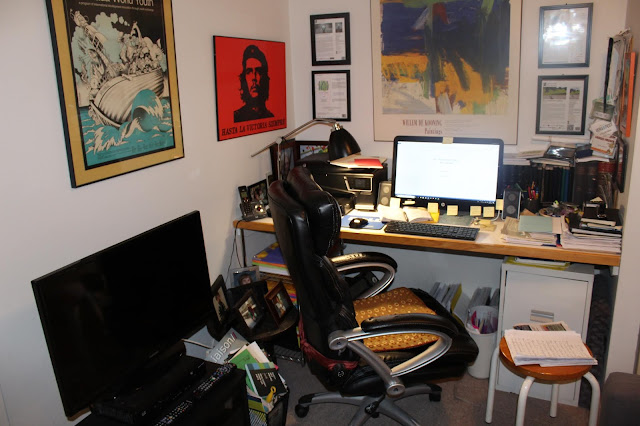 Although there have been few days since my teens when I’ve not written at least a few lines of poetry or fiction, I can’t really say that I have ever had a routine approaching what one might call a typical “writing day.” I have never adhered for any length of time to any form of work schedule focused on writing.
Some ten years ago, after gratefully being fired from my last day job, I looked forward to the long anticipated self-indulgent freedom to do what pleases, including on some days very little or nothing at all. Oh yeah…
Unfortunately, I was soon to experience what all people who have “nothing to do” eventually learn: days have a way of filling up with unforeseen and tiresome domestic chores. As a result, my daily mantra, not always grumbled under my breath, soon became “I never have enough time to do what I really want to be doing”, namely: reading, writing and listening to classical music and jazz.
So, with the acquired wisdom of this disappointing late-life education, and after putting it off for several weeks, I can finally turn to writing this short essay on “my writing day” with the understanding that it is a study of how, every year or so, I manage to produce a book-length manuscript and even, every other year, to get one edited and published.
Of course, part of the answer is already in the admission that I’ve put off writing this piece for, well, over a month…
Yes, indeed, the first thing I have to admit is that, while I constantly scribble disparate notes in the dog-eared notebooks I carry around everywhere – on the run, on the bus, on the couch, online, and even on to the conjugal bed – I also stubbornly avoid, and deliberately put off for months at a time, the dreaded task of sitting down at the computer to start mining this messy slag heap of scattered fragments. Translating into some kind of initial form this outpouring of silent utterance and private ballpoint graffiti which by now fill the barely legible pages of several notebooks, is most definitely not anticipated as a labor of love – really, it’s more like old fashioned hard labor!
Ah. But. Eventually. A sly nagging guilt builds up within the writer’s (unsuccessfully) suppressed conscience, so that inevitably, after days of finding excuses in conveniently urgent chores, the “dig” finally, reluctantly, gets underway. A few minutes at a time, then for an hour here and there, and then for hours at a time, the potentially be usable nuggets of buried ore are extracted from the anarchic diaries and typed up, in no particular order, but already with some intuition of things to come.
I refer to the notebooks as “diaries”, but at this stage they are little more than layered and intertwined streams of single words; disconnected phrases, run-on images, draft poems and haiku-like day-to-day observations; lists of barely referenced quotations and borrowed ideas; bits and pieces plucked from various books and journals, whether quietly read at home, or standing in line at some bus terminal, or sitting in the dentist’s waiting room; or from chapbooks glanced at on public transit; or absurd titles and lurid photos spied on the covers of celebrity magazines while unloading the trolley at a check-out counter ; scraps from conversations overheard at the gym (well, you know, now and then); or noise from radio and television, background  mumblings, songs, newscasts, commercials; and sudden uploads from the subconscious swamp.
Yet, from this mass of relentless stimuli streaming through the senses, downloaded into the mind to churn there furiously or peacefully, while awake or asleep or in the wake of sleep, with dreams also imperfectly noted in the pre-poetic shorthand of hurried script at waking, some of the more significant or simply startling images re-emerge and develop in initially unconnected tropes, essaying early forms and toying with the initial suggestion of possible rhythmic patterns and soundscapes within the evolving syntax, as they are moved around, provisionally stitched together in phrases, gradually organized in sentences, tentatively joined in sequences, struggling to make, well, let’s simply call it: poetic sense.
Oh, it is an absorbing and draining process, this often frustrating toil of trial and error, the finicky drudgery of identifying the raw materials, of refining and developing them, of bringing about, by concentrated industry or simple coincidence, a form that produces meaning (or meanings) through the sound, rhythm and definition of otherwise ordinary, quotidian words,.
Ah, but it is also an endlessly fascinating process, producing in its final stretch an incomparable high that can be addictive. A most fortunate addiction, though, one that I forever try to resist, one that I keep falling back into with ever increasing delight – probably because I’ve so determinedly stayed clear of it for weeks and months!
Yes, hm hm, I’m hooked alright, hook line and sinker – and suddenly I look up, realize that I’ve no idea how long I’ve been at it. Hours gone by. Not eaten since the morning. Forgot that documentary on English gardens I wanted to watch on TVO. Missed the 11 o’clock news – oh what inane tweets from Trump didn’t I get to scoff at?
So what? I don’t give a shit! For behold on the screen: a word object that might, just might, have been worth the trouble, the absence, the spell, the risk. Oh well, I won’t  know until tomorrow when I reread…. When I sit at the computer for a new fix.

Damn, I can hardly wait! Gilles Latour is a Franco-Ontarian poet who lives in Ottawa with the love of his life, three cool cats, and a manageable debt load. Fortunately, poetry is free, or at least freeing and he has published four full-length poetry collections at Les Éditions L’Interligne (Ottawa), where he was poetry editor for a few years. He occasionally gives readings locally, elsewhere in Ontario and in Quebec, while hopefully waiting for a call from abroad. In the meantime, a number of his unpublished manuscripts are being kept warm, just in case. He also experiments with the production of “readable objects”, some of which involve recycled “Pot of Gold” chocolate boxes, as well as an old bird cage painted ghostly white and filled with crumpled paper. Latour doesn’t really know how to write in English, so thanks are due to friend Ted Swanson for editing the initial draft and correcting the author’s crudest mistakes. The self-portrait shown above (Gilles Latour, water color, painted by same circa 1990) is way beyond its “Best Before” date.