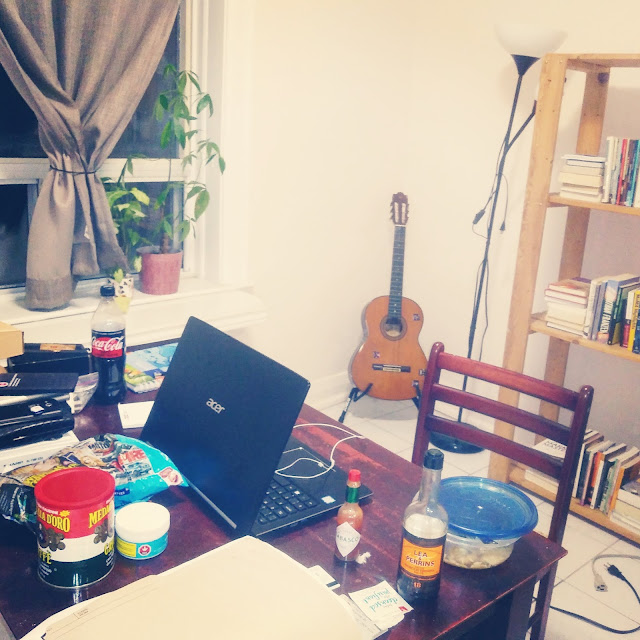 I spend three quarters of my writing time making poems and a quarter reviewing theatre for Mooney on Theatre. Rotating between literary and journalistic pursuits is how I keep things fresh for myself.

If it’s poetry, I need to be working toward some larger-scale project, or at the very least have an idea with a discernible shape, to feel motivated to sit down and put the time in. Typically two two-hour sessions with a smoke break in between. I’m not the kind to pour feelings out; I need to know exactly what I’m doing. Right now, this involves a Google Doc where I’ve been storing writing I would have otherwise called a false start and deleted. It contains north of four years worth of material, which I’m revisiting systematically. I find it’s easier to get something onto the page with a simple generative process to follow. In this case, I copy 4-6 random chunks out of the file, paste them into a fresh document, and make a new poem out of it.

I find it freeing that the poem is, in a sense, already in front of me, and it’s my job to chisel away until it’s all that’s left. This way, there’s no need to come up with an idea to get going, and I can just play with the words,, tinker until something interesting happens. It’s been rewarding to give a new lease on life to so much crappy writing.

If I’m reviewing theatre, the process is faster pace and noticeably more grueling, which is probably half the reason why I do it. My turnaround is under 24 hours and the pressure to produce is a welcomed rush, a creative workout that carries me through the week. Writing starts as soon as I get home from the show, and usually stops around 2 or 3 am, knowing I’ll have to be happy with wherever I’m at before leaving for work in the afternoon. I feel grateful to participate in the long tradition of sweating over deadlines for pieces you believe in, ones that treat art with the respect and thoroughness it deserves regardless of quality.

My approach to criticism has an academic bent. Statements have to be qualified with evidence. There has to be a thesis and proof for it set forth. I never shy away from delving into minutiae so long as it ties back to the play’s grander themes. It may result in heavier reads, but it also helps to stand out among critics more concerned with digestibility than content.

To get in the right headspace to grapple with language, I require only two essential elements. Ideal caffeination, approximately a third of the way into my second cup, and music. Here’s a handful of recent finds to give you an idea of the vibe: Mick Jenkins-Jazz; Isaiah Rashad-Nelly; Janelle Monáe-Take a Byte; Lake Street Dive-Use Me Up; D’Angelo-Sugah Daddy.

Trevor Abes is an artist from Toronto with a fondness for writing essays and poetry. He was part of the winning ensemble at the 2015 SLAMtario Spoken Word Festival, and competed in both the National Poetry Slam and the Canadian Festival of Spoken Word as part of the Toronto Poetry Slam team. His work has appeared in Torontoist, (parenthetical), untethered magazine, Spacing Magazine, Descant Magazine, The Rusty Toque, The Theatre Reader, Mooney on Theatre, The Toronto Review of Books, Hart House Review, and Sequential: Canadian Comics News & Culture, among others. Reach him on Instagram @TrevorAbes.