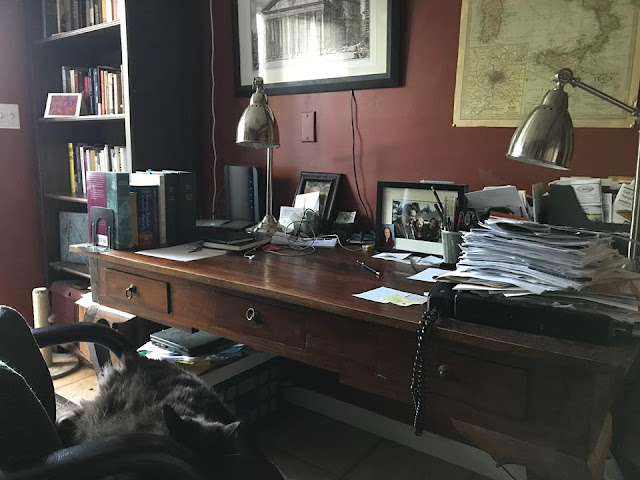 It may not be my typical writing day, but it is my favourite writing day. It’s Sunday. It’s the one day a week we receive a newspaper—The New York Times. So first I read the paper. Coffee. Then I walk. Then I write for a bit. The Times works not because I think it’s the best paper, not because something else might work just as well—it’s fairly arbitrary. What it is is a source of unexpected and unpredictable outside information, on a day I can slowly take it in. It is typically a book review that gets me going—the imaginary suggestion of something I have not yet read, which doubles, shadows, and for a little while haunts the always present something I have not yet written, but which is much on my mind.

Right now it’s something about W. G. Sebald. I thought it was a long poem that was shaping up. But that has become elusive. I ponder Phyllis Webb’s notion of a poetry of failure a little too obsessively. So prose—the idea of some prose—becomes some sort of haven—even if it’s a pursuit of melancholic Sebald—even if that prose takes on a sort of poetic structure—a prose “sestina” for the gone-too-soon German.

So out I go for that walk. Maybe uphill onto the bluff where a park occupies the bowl of what was once a quarry and there are views back across the Fraser River Delta towards the North Shore Mountains. Notice the usual black cap chickadees—but also this day, a red winged blackbird. And a varied thrush. Already. In mid-January.

What’s ticking is a process of metamorphosis of the idea of the project I’m in the midst of, set off by whatever took my fancy in the Times. They wear against each other productively, a good kind of friction warming my mind. What I’m working on changes, maybe just a little, offers a new perspective, a new wrinkle, whatever. By the time I’ve returned home, I’m ready to make some notes. Grab my journal (always a hardcover unlined black artist’s sketchbook—currently on journal no. 98, after 30 years of scribbling) and pen (usually a black ink Uniball). Kick the cat out of my chair, the occupancy of which he is always vying for (sorry cat) (he might make his way back onto my lap before too long). Scratch out those notes.

And if things go well—and if the day is quiet and open—and depending on where I am in whatever it is I’m writing—I might shift from journal to computer and keep going. And even if I don’t—if there’s only time for the paper and coffee and a walk and some quick notes in my journal—it’s still a good day and a warmth that is a sense of something stretching its never-used wings inside the chrysalis of an idea stays with me throughout the day. So on my ideal writing day, there in fact may not always be a lot of writing happening. But there is reading, and walking, and thinking, and my journal. And that is enough—that’s most of the process, stretched over years, anyway.

Stephen Collis’s many books of poetry include The Commons (Talon Books 2008; 2014), On the Material (Talon Books 2010—awarded the BC Book Prize for Poetry), DECOMP (with Jordan Scott—Coach House 2013), and Once in Blockadia (Talon Books 2016—nominated for the George Ryga Award for Social Awareness in Literature). He has also written a book of essays on the Occupy Movement, and a novel. Almost Islands (Talon Books 2018) is a memoir of his friendship with poet Phyllis Webb. He lives near Vancouver, on unceded Coast Salish Territory, and teaches poetry and poetics at Simon Fraser University.