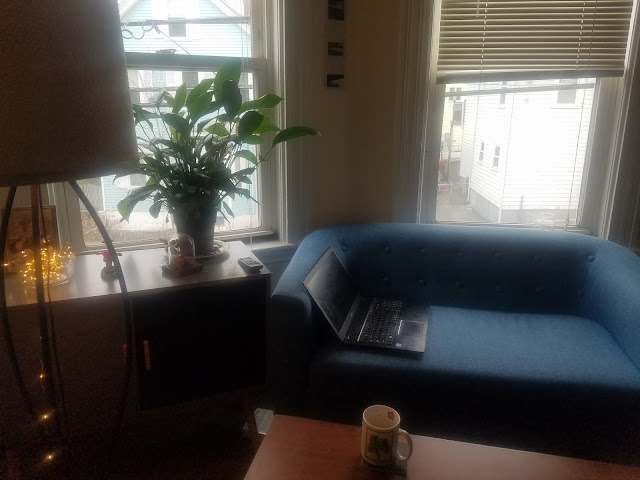 My writing life is mostly a life of sneaking. I look forward to doctors’ waiting rooms, bus rides that take multiple hours, and other occasions when I’m forced to sit still. Mostly, I write in short bursts before getting called away by my unwashed dishes, precarious mountains of laundry, emails in need of a response, the allure of British procedurals, etc. I also work a full-time job.
Fortunately, I’m good at jumping back into a story and writing furiously during whatever time I have. Brief, intense writing sessions have become my modus operandi, even when empty hours stretch out in front of me. I write this now at my local library, where I’ve secured a quiet gap between my morning errands and an afternoon appointment. It’s Saturday. This is typical.
What’s typical, too, is waking at 8:00 or 8:30 on Saturday and puttering around for a while. Breakfast, listening a podcast or a record. I either go to exercise class or wish I’d made it to exercise class. I do some cleaning around the house, check and sort the paper mail.
A coffee mug is glued to my hand the whole time. If I’m lucky, my favorite mug will be clean and waiting for me on Saturday morning. The mug’s white surface features three yellow squares with green borders. The squares look like trading cards. On each card is an illustration of a Hawaiian plant: apple banana, dwarf croton, monstera deliciosa. I learned that last one means “monstrous delicious” but for years my untrained eyes read it as “delicate monster.”
I got this mug at a Goodwill in Seattle. I had just moved there with very few possessions and I felt very alone. I was approached by a woman who worked at the Goodwill. She said that I might like the mug in her hand, meaning the one that has become my favorite mug.
She said there was another mug that she was about to put on the shelves, but I looked like someone who would like it, and she wanted to give it to me. It had a droll cat with the caption, “You’re nobody until you’ve been ignored by a cat.” I still have that mug, too. Sometimes I think of myself as a monstera deliciosa, but in that moment I felt good. I felt renewed by random kindness, which is a powerful thing and something I write often about.
Around 9:30 or 10:00 in the morning I’ll get down to business. If I’m kicking off a project, I’ll write longhand. It’s physically satisfying and offers fewer distractions than my treacherous laptop. If focusing remains difficult, I’ll turn my phone off and hide it in a drawer. For the next couple hours I’ll engage in something I thought I developed on my own, only to tragically discover it’s called the Pomodoro Technique and it made its inventor very rich some years before I was born. Another fortune missed. I write for about half an hour followed by ten minutes of zoning out or playing a game on my phone or browsing Instagram or otherwise disposing of my time in a pleasant and unproductive way.
Later in a project I’ll type up what I’ve handwritten. This serves as an editing pass and a painful reminder of why in primary school my penmanship was rated on a 1-4 scale as 2-. The resulting typed document I call Draft 1.5. I end up with three drafts in the end.
Around 12:30 or 1:00, I’ll take a real break and go off to do whatever the day demands. Around 4:30 or 5:00 I’ll write again until it’s time to call it a day, usually around 6:30 or 7:00.
These are the concrete parts of my writing day, but a great deal of my process lives in my head. I conceive of scenes and dialog during slow walks around my neighborhood, sometimes aimless but often with a destination. I’ll write down notes in my phone. Between 1:00 and 5:00 this Saturday I did a lot of that as I slowly walked to the library and then on to my appointment. I thought of a scene where a woman eats ice cream in her car. It makes sense in the context of the novel. I promise.
At 6:30 or 7:00 I’ll cozy up with a British procedural or leave my home for the purposes of socializing. It will have been a good day, even if the weather was bad or the errands were many or the coffee was weak because I’m too impatient for my French press. It will have been a good day because I got to write. Because I have a room of my own. Because I had something to say and I said it.

Meagan Masterman is a from Maine, living in Massachusetts. Her manuscript “What Dies Inside” was shortlisted for the 2018 Metatron Prize. She co-edits the journal Reality Hands. Her work has appeared in Funhouse, Maudlin House, Ghost City, and more. Find her twitter at @meaganmasterman.