Since it’s not a day for volunteering at the community centre, since the exercise class with our merry band of stretchers was cancelled due to weather, since I did a big batch cook yesterday putting a few days of meals in fridge and freezer, since I don’t have a headache, nausea from pain, nor vertigo today, I’m more free than usual to bear down and write. I woke at 10 instead of my planned 8:30 but at least it’s not 11 yet. As I write, the local Quebec power grid is down again for a few hours but we have solar backup.

For a lot of years, 3-5 hours out at a reading meant being useless for 3-4 days, but my energy has been more truncated from a concussion, so most of my time is well, rest. I don’t have many functional hours a day. I suppose rest uses up what others use on employment, kids and sleep deficit.

What time remains mostly gets used in making meals and other life maintenance, brushing the dog, connecting with hubby, and planning my ambitions to get a poetry class up and running.

I was awake in wee hours composing in my head; I jot that down to evaluate in a few days. I make sketches of an asemic chapbook. I explore making acrylic paintings when I feel non-verbal but today I have the verbals. I consider photographing my office as writing space but a) it’s a midden b) couch and bed are more usually my work space. Breakfast in bed with the cat trying to commandeer the boxes. Laptop bedside to move straight into the day.

Typical mornings, I review my to-do lists, comforted that even if it was an item from 2 months ago, I can check it off. I have to keep myself busy waiting for mail. Should be a newspaper day. Or my Frog Hollow chapbooks might arrive today. Slowing breath and tempo, I read more of Yellow Crane by by Susan Gillis.

After lunch, I peck away at something in a notes app. These days I grease the gears with NaHaiWriMo (National Haiku Writing Month, the shortest month for the shortest form) where there are daily prompts. I have always responded well to prompts. That probably amounts to under 10 minutes a day but like the 7-minute intense workout (which I don’t do yet), it’s enough to keep the brain more fit. You write more poems by trying than by waiting for “inspiration”. Take a breath and write.

I write differently than a decade and two ago. Not only because I was wed to non-lyrical and now am exploring them. I have no more desparation of all-afternoon sessions or 2 days locked in my office in verbal barfs. No 2-8 poems a day habit and every moment is a writing day. Maybe that’s aging, maybe that’s Maybelline healing. Maybe I have more of the repressed, angry, and unprocessed worked out. Maybe I don’t overstim myself into overload the way I did. Helps that I currently don’t have active stalkers and am not front-line worker with refugees anymore so that brings the baseline of stress down again.

When my brain gets full, I’ll nap or shovel snow, walk the dog, read about diseases of goat, or poll for new emails for doing data entry.

I’m currently working on cover and layout on a chapbook that may be out this May or June with phafours press.

I say I haven’t written a poem for the last 3 years, between managing a reading series and recovering from a concussion, but I guess I have made 50 or 60 poems from scratch that work well enough to polish. Mostly I edit poems from the last 12 years, getting manuscripts in order. I have 3 book manuscripts done, and 2 more underway. That wasn’t the plan. The plan was to find poems to submit but the rabbit hole of editing smells like carrots. 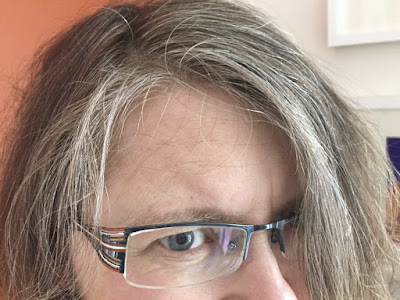