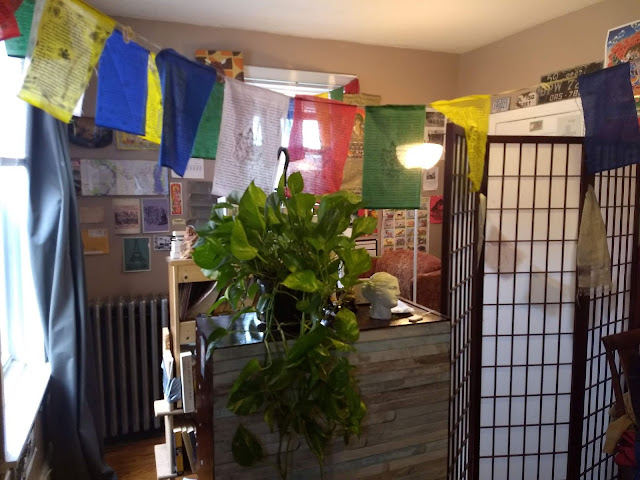 My partner Tiina, wrapped in scarves and layers, just stepped out of our third floor row home apartment into the Philadelphia winter, to her office as a PhD student at the University of Pennsylvania. For me, a day of uninterrupted work gapes ahead. The plan: meditation, email, and then writing for two hours. 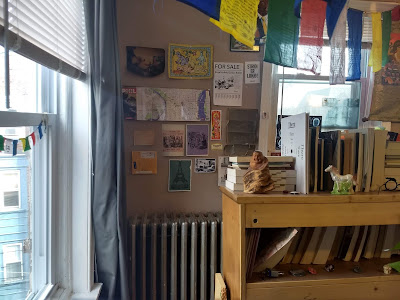 Some writers look at a long undisturbed afternoon as some kind of delicious luxury. For me it is a terrifying prospect, fraught with aversion. I have to warm up to it, to trick myself—into sitting in my old red reclining writing chair (my “studio”), computer on my lap—with bribes of coffee, snacks (chocolate mint girl scout cookies, bought from a girl at a fold-out table on our corner), YouTube (I’ve been revisiting my adolescent obsession with Michael Jordan, watching long dreamy montages of MJ dunking in traffic), Netflix (Idris Elba as Luther), and music (William Basinski’s “Disintegration Loops”). I’m allowed to check email and social media just three times: morning, afternoon, night. Without social media limits I’m very addictive: constantly clicking on open tabs of Twitter, Facebook, Instagram. Some social media is useful, as I have book coming out (The Mean Game, Palimpsest Press) and I’ve been trying to organize a tour, but mostly social media just seems to diminish my focus on anything in particular. 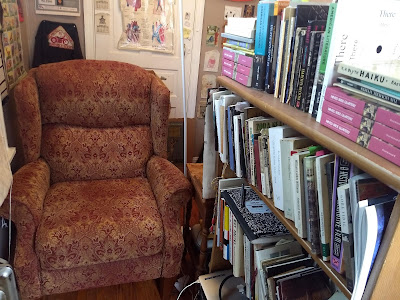 I am simply too stubborn to force myself to start writing. But once I begin in earnest, the experience is immersive and cathartic. Recently I’ve been writing poems using the endless scraps of notes I made during our time in India (2014-17). I must admit that in the context of West Philadelphia, poems about hurt dogs seem less fascinating. I am finding some gold, though, and scrapping the rest. Aside from poems, I’ve been writing a review (of Ernest Hilbert’s “Caligulan”), an essay (on the “cold” art of Louise Glück and Stanley Kubrick), and a collaborative review (with the poet Vasiliki Katsarou, on the Italian movie “Lazzaro Felice”), among other things.

For years my writing day involved visiting my studio. In Halifax, in 2002, I—confident that I was a writer/artist, but unsure of what kind—rented an artist studio in the Propeller Building on Gottingen Street, as a promise to myself that I would make art every day. (Another bribe, but it worked!) The building smelled of hops and oil paint, and there were artists producing art in every nook and cranny. I taped images, poems, drawings on my walls. It was a cool environment. In all the houses that Tiina and I have rented since 2010, in Asia, Europe, and North America, I’ve been lucky enough to have a separate studio room. But big city life in Philadelphia is expensive. Now, in our row home, my workspace has been shrunk to half of the bedroom, behind a Shoji screen room divider. Focal point: an old red reclining chair. 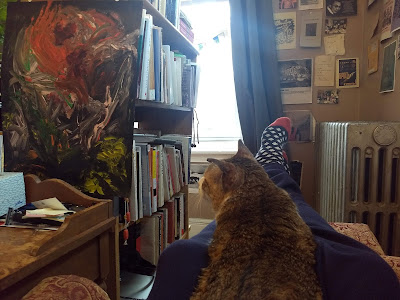 We have one cat: an FIV+ tomcat from Dharamsala, India, called Senge (“Lion,” in Tibetan). He has broken teeth and ragged ears, from his fighting and hunting days in the village. He sits on my lap all day. A sweet scene.

I used to be proud to write at night, when everyone else was sleeping. I thought, until six or seven years ago, that there was nothing better than drinking a coffee at midnight and sitting down to write for a few hours. I’d also smoke a cigar. The cloud of cigar smoke was intimately linked to my poetic reverie. But now, almost fifty years old, my brain seems to be more active in the morning. The unconscious mind is closer, fresher, soon after I wake up. And I stopped smoking cigars two years ago.

After a few hours of writing, I go to the gym at the Penn Rec Center. This process—preparation, walk over, exercise, shower, walk home—is all integral to my writing day. First, it’s an amazing way to dispel my nervous coffee-laced energy, to shake up my sometimes-depressive thinking patterns, and to strengthen my middle-age man bod. At the gym, treadmills are attached to TV screens, so I place a towel over them (life hack!) and read my e-reader (Freud on the Uncanny). The walk to and from the gym—through Spruce Hill and the sprawling Penn campus—helps me work out little snags in my poems. Surprise solutions occur out of nowhere: I record ideas on my phone and decipher the mad ramblings later. After the gym I can sometimes sneak in an extra hour of poems.

Evenings are for exploring Philadelphia. It’s a cool city for walking, foraging for inspiration, and sitting in a café with a pen and paper. The writing scene is diverse, labyrinthine and thrilling. There are multiple readings, workshops, and gatherings every night, and many poem-lovers. My “writing day” ends holding a Guinness, listening to poets read at an Irish pub in Center City called Fergie’s.

John Wall Barger’s poems have appeared in American Poetry Review, Rattle, The Awl, The Cincinnati Review, Vallum, The Fiddlehead, Poetry Ireland Review, and Best of the Best Canadian Poetry. His poem, “Smog Mother,” was co-winner of The Malahat Review’s 2017 Long Poem Prize. His fourth book, The Mean Game, is coming out with Palimpsest Press in spring 2019. With his partner, the philosopher Tiina Rosenqvist, he lives in Philadelphia and is an editor for Painted Bride Quarterly. (johnwallbarger.com)