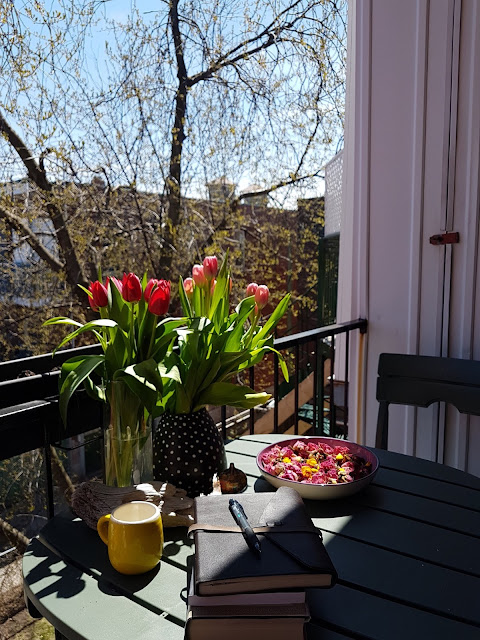 I’d be lying if I gave you a detailed schedule of my writing day. It’s a little more haphazard, yet the words come, days go, hours pass. Weeks, months, years, lifetimes. I am still writing. Sometimes I am on a speeding train between Montreal and Toronto, other days I am sitting in my kitchen in Montreal’s Plateau. I am still writing even though I am starring out the window, or counting the bricks on wall, calling them almost poems.

Today I am on the terrace. It’s one of the first few warm spring days – the birds are up, and the trees are bursting. I am thinking about writing, and the thinking is part of writing. It’s opening up the mental space in order to let thoughts to come, ideas to arrive, and concepts to form.

I would like to say I write in the notes section of my phone in line at the grocery, and on the back of receipts, as if writing has no consequence, and there is some element of whimsy or divine intervention to it all. But that’s not entirely true. Fragments, or ideas sometimes come quick, and so I jot them down, but writing is more complex and temper mental.

I do think different genres of writing require different spaces. While writing academic papers I often find myself in institutional spaces like libraries, and universities. It helps sharpen my wits, so to speak. Critical or journalistic writing seems to be something I do around a city or place – in bars, cafes, and mostly in borrowed kitchens.

Critical writing, editorial work, or academic work is typically done on a computer. There’s is a rotation of coffee, still water, soda water, and/or kombucha. If it’s later in the evening, sometimes I will write with a glass of wine. I’m always listening to music – which is the ultimate fuel for writing and being. I light candles (I know, how cliched). I like a full belly.

Poetry is more allusive. Often poetry comes when I am not thinking about writing – I could be swimming, hiking, at a yoga class, or drifting off in thought mid conversation. I don’t think I write actual poems in these moments, but lines or notes towards a poem. Sometimes I jot them down, and they become part of a poem or poems, other times they drift into the ether. On these types of days, I remind myself of an editor who kept the following words posted on his fridge: you only fail if you stop writing.

Shannon Webb-Campbell is a mixed-Indigenous (Mi’kmaq) settler poet, writer, and critic currently based in Montreal. Her first book, Still No Word (2015) was the inaugural recipient of Egale Canada’s Out In Print Award. She was Canadian Women in the Literary Arts Critic-in-Residence in 2014, and sits on Canadian Women in the Literary Arts board of directors. Her work has appeared in many anthologies, journals and publications across Canada including The Globe and Mail, Geist Magazine, The Malahat Review, Canadian Literature, Room, and Quill and Quire. In 2017 she facilitated a book club-style reading of The Final Report of the Truth and Reconciliation Commission of Canada at Atwater Library in Montreal; she also championed Carol Daniel’s novel Bearskin Diary for CBC Montreal’s Turtle Island Reads. I Am a Body of Land is her latest book.