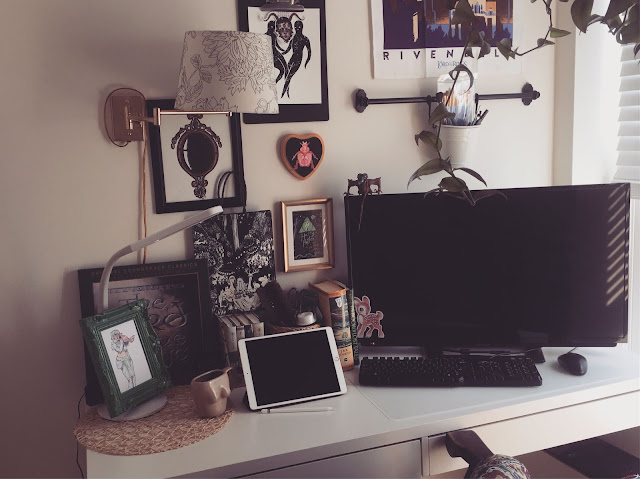 My relationship with art has always been one of give and take. I was too tired and uninspired for the first half of my animation career (my 9-year work-i-versary is this month) and no amount of guilt could bring back my desire to create for myself. I was exhausted from satisfying the requirements of others; first my professors in college, and then, my studio supervisors and directors. I was so worried about making a good first impression that I lost the thread of why I create and who I create for. Spoilers: it’s for me.

But time heals all wounds so-to-speak, and one night while Skyping my then-long-distance girlfriend, I started to sketch one of favourite fictional characters. Just because.

I picked up the thread again and started creating, selfishly. Every sketch or thumbnail felt like a win because I was doing something for me. I was creating the art that I wanted to see. I slowly began to share these little victories with friends and family. I was proud that I had made an effort, and as someone who lives with both depression and anxiety, sometimes the attempt is enough.

I put myself out there after that. I became more confident in sharing my work online and began investing in certain tools to further my craft. I still get a little sweaty when I think about how much money my Cintiq (an interactive display and tablet combo) cost me but my peers assured me that it would pay for itself.

It has. Within the last few years, I have been able to participate in multiple zines, online drawing challenges, and a handful of paid illustration and design gigs. It finally felt as though I had found a balance of animation work (yay, steady monies!) and fulfilling personal art. So, like any other self-respecting type-A yes man, I began to hustle. I started saying yes more to continue the trend of making and accomplishing. I made goals for myself and I wanted to see them through.

Smash cut to me getting an unexpected new position at my studio demanding more of my time and energy (and just more overall responsibility). I was at a loss. I hadn’t planned for this. This was the worst possible timing and thing and I was going to let everybody down. I couldn’t say no though.

During those first few months as a lead animator, I continued to push my personal work, just as hard. I didn’t want to give up what I had but I needed to please the powers that be and collect a paycheque. Eventually, I got used to my new routine at work and I was able to continue creating for me. Yes, I was tired all the time but I still able to find those pockets of joy within the work that I was doing at home; so, it seemed worthwhile.

Full-time 9-5, finding time to draw and post online, moving house, and more; it all caught up with me. Enter burn out. I started getting sick, a lot. I almost lost someone very near and dear to me around this time, and instead of stopping to catch my breath, I threw myself headlong into my work to drown out my thoughts and feelings. I had a proposed schedule to adhere to and staying busy kept me from overthinking. My anxiety started creeping in from the shadows though, “you have to stop and think sometime,” it whispered. The enormity of the year came crashing down around me and I had to tap out at a certain point.

A well-timed and much-needed Christmas break followed, and I made zero art for two and a half weeks. It was an important moment for me to stop and just be. I got a new tattoo, ate my weight in roasted vegetables, read voraciously, and started planning my first real vacation. Consequently, that vacation is next week and I’m stupid excited to stay in a remote cottage and fill up on strawberries. I wouldn’t trade this period of time for anything. I felt safe and reinvigorated and ready to take on the New Year and some new shiny goals. You know, if and when I felt like it.

I told myself that this would be the year that I would start being selfish again. But, “selfish”, not just in making my own art but in taking the time to invest in my well-being as well. Impostor syndrome constantly clouds my judgment; I wrestle with the belief that I haven’t done enough in a day. But no job is worth sacrificing my mental health for. I have to be kinder to myself, and work on not feeling so anxious whenever I’m not doing something “productive”. My mom had a constant refrain during my dark and gloomy years as a teenager: “One step at a time.” It’s been echoing throughout my head and my every day a lot lately. I wonder why?
I had initially wanted to spend this post writing about my process, but I think I’m still processing what mine is. My often-all-or-nothing attitude makes finding a middle-ground a struggle. So, here’s to a future of middle and good; a new normal, whatever it may be.


Cassie Young is an animator, illustrator, and aspiring tattoo artist living in Ottawa. Her professional work can be seen on Disney TV shows like Tangled: The Series, The Lion Guard, and Jake and The Neverland Pirates. Her design talents have created merch for companies such as Potterless Podcast and Moo Shu Ice Cream & Kitchen, and her most recent work is her first zine: Concerning Flora and Other Botany, an illustrated appreciation of J.R.R. Tolkien’s plant life. She is currently pursuing a tattoo apprenticeship, a lifelong pipe dream of sorts. Find her personal work at http://www.instagram.com/youngcassieart
at June 12, 2019