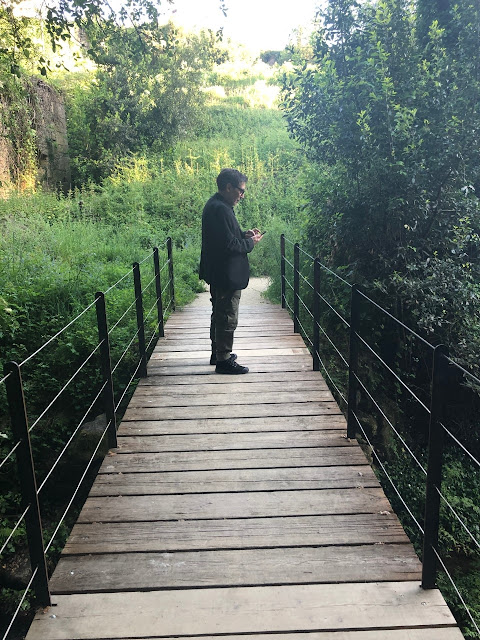 Excluding the regular production of scholarly texts—often collaborative, and scheduled in accordance with my research group’s academic objectives—, my typical writing day is a typical not-writing day. I rarely manage to encase writing into a routine—like something I would do around the same places at the same hours of the day, same specific days of the week or during some periods of the year. Despite being awfully busy for most of the academic year, I’ve never learned to take advantage of vacational months. Most of my days are (dis)organized around teaching and research work and my nights around on- and offline reading, so my involvement with active “literary writing”—to use a term that I dislike—has become something akin to that commonplace about teenagers and sex: I think about it all the time, I try to do it often, but I rarely succeed—and when done, it’s a quick, messy, and intense blessing. Using sex as metaphor for writing might seem an outfashioned Freudianism; however, if there’s a single human activity which could still be properly related to psychoanalysis it must be writing, for all its baroque dynamics of frustration and joy. In my experience—and I know many of my writer friends will disagree—, you never really mature as a writer, the same way that—also expecting some difference of opinion on this—if you’re a real lover, you never mature as a lover.

For instance, I’ve been thinking about this text for a couple of weeks and only right now decided to start working on it, while resting over the living room’s couch with the ipad in my hands, enjoying my first Saturday morning espresso. But I’ll be leaving home in a while, which means I’ll probably be trapped in an ambiguous state of concentration for the rest of the day, thinking about this text, maybe allowing myself to interrupt whatever I might be doing—wandering, shopping for groceries, tweeting, sharing a beer with a friend, having lunch somewhere out of the reach of the zombie-tourism horde...—to key in some additional notes on my phone. I’m a peripatetic thinker. Ideas arrive frequently on the go, while walking around or traveling, under the shower or in bed. It’s good that this text automatically copies itself to the cloud so I can access it from any of my devices. Before devices, I used to carry a notebook in my pocket, but that was long ago. Nowadays, everybody is busy with their phones all the time, so my surreptitious activity goes most often unnoticed...

But, of course, this one is meant to be a short text... I’ve never figured out how I manage to write full-length books. I never have a specific plan in advance; only a chaotic, eventually self-organizing collection of vague ideas going on in my mind for months, sometimes for years. It’s as if during all this time everything I think-as-writtable keeps circulating in an undefined space of possibilities (a space that flows into and out of my devices) which haunts all my other activities, including my private, social and academic life. I’m rarely writing because I’m always writing. People often ask me about how my work as a scientist affects my writing and the only answer I can provide is that my work as a scientist, like my whole life, gets hacked —and then, somehow repurposed in a haunted form—by my drive to “think fictionally” which eventually will become materialized later into written words. So the science infecting my fiction was already fictional itself; a perverse, degenerate method of dis-organizing reason.

I’ve never identified myself as “a writer”—and specially I don’t refer to myself that way in a “productive” sense. I’ve never considered that literature should be useful in any way. I love the uselessness of things, the evanescence of purpose. Most of my ephemeral intuitions never make it to the devices, and among those that do, many will be deleted. I seldomly keep drafts, but some presumably final texts will become drafts for new ones to come. I recycle. This piece itself will be eventually recycled one day. Actually, what an outsider would mistake for a “proper” writing attitude—myself sitting for several hours in front of my laptop, most often at late night or during teaching breaks—usually corresponds to recycling/correcting/re-structuring work.

Even when I have the prospective of some free time to write—like during the forthcoming summer vacation—, my wish of reading others’ work gets in the way. Borges said the he felt more proud about the books he’d read than about those written by himself. I’d say that I’m much more interested in reading what others had written than in writing my own stuff—interest that has expanded to keeping a well-curated social network/online community  and trying to keep up with the constant flow of wonderful online texts. I naturally intend my writing to be as close as possible to “reading” some “other-me” whose cognitive endeavors I hardly recognize. “Italo Calvino said that all his books began with problems that he knew he never could solve”—wrote Harry Mathews— “Plainly, he is attracted to insoluble problems. Why? They allow him to make discoveries. Choose your subjects so that you can discover what you didn’t know you knew.” (1)
Needless to say, I just had to walk to my library in order to find this quote. Harry Mathews is always at hand but my library is thoroughly chaotic—I often spend some time searching for the right books, and this wandering among shelves or online is also part of my peripatetic working style. I like going from one place to another, even if I stay the whole day in the same room.

In her short story “Pilgrimage”, Tomoé Hill describes a woman having an spontaneous orgasm while sitting in a Paris Métro train : "I sat in the narrow plastic seat and clenched violently—a last gasp stifled, as were all my gasps then—spasming as if possessed; another hidden orgasm in a city where I should have been luxuriating, unabashed, in layers of literary and actual sex. Instead I was coming alone on the Métro, in a crescendo of solitude. There is a line in Henry and June: “Writers make love to whatever they need”. Love seemed like a puzzle piece that did not belong to the rest of me: I do not know if I was making love to myself in the hope that I might understand my life—the distant poles of desire and its opposite that I seemed to both inhabit—or because I wished to be a writer, another impossibility." (2) This text perfectly summarizes my own relationship with writing—my days-in-writing, rather than a succession of writing days—: the nomadic wandering of the embodied language dynamics, the inseparable combination of pleasure and  exasperation suddenly performing itself—like a theater of seizures—in the most awkward opportunity. The alchemical summoning of a fantasy’s seed that won’t be understood until it’s shared with others.

However, a perverse, precise, and active dedication will be required to expose that part of my body which is language, to let the collection of archives which remain undeleted ensemble themselves into the hallucination of a rhythm. Writing is much more than letting language creep over my changing perception of reality: writing is essentially transcribing, which is when the most important findings are bound to happen. To achieve a transcription mood I must go out again—it would be useless to stick my nose in the screen where the cursor keeps blinking. I’ve known of poets who can only write while listening to the repetitive hammering of industrial machines, others who need to pay attention to their own heartbeat amplified by the effects of chemical stimulants. The rhythm is first absorbed by the bodies, and then language sculps itself in their insides. Sometimes, everything just starts and ends with a nonsensical but well-architected pack of words.
So there’s a writing cycle after all, inhaling and exhaling a multitude of micro-universes, the prospect of laying many eggs so one or two will get an opportunity to survive. At last the work gets done—it might sound like an effortless game I’ve been playing for a short while, until I realize it’s almost 4 AM and some emails are still waiting to be responded. And then I know that I must be exhausted, because I’ve been unconsciously time-traveling.

Germán Sierra is a teacher and neuroscientist living in Spain. He has authored six books of fiction in Spanish, and one in English—The Artifact, released in 2018 by Inside the Castle.