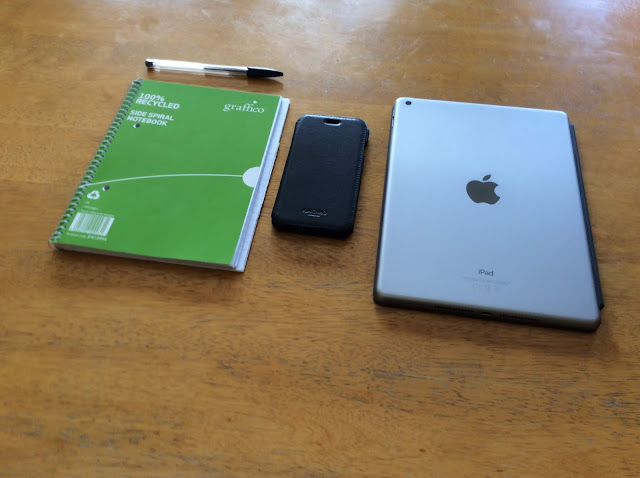 I am a foot soldier in Ireland’s standing army of poets.  Like most of my comrades in arms I hold down a full time job and have never had the luxury of a writing day as such.  I don’t even have a dedicated work space since I don’t write at the same time or in the same place on specific days.  Writing has always been something that has had to fit around all the other tasks I have to accomplish in the course of a day.
I write at my kitchen table, sometimes at my desk in work and since the advent of smart devices basically anywhere I happen to be when I need to get something down while it’s fresh in my mind.

I do however have a writing process which has evolved over a long period of time.  This is, on the face of it unstructured, relying on things scribbled in notebooks, on scraps of paper, sometimes literally on the backs of envelopes supplemented by newspaper cuttings that interest me or have triggered an idea for a poem.  Books, papers, literary journals and magazines continue to pile up all over the house but, of course, more often than not I can’t find that specific item I saved when I actually need it.

My writing process has always included a sense of what is happening in the world today.  I read somewhere that the first task of the poet is to think.  A prerequisite for that is clearly a passion for ideas and a refusal to accept there should be borders between poetry, history, politics, philosophy or economics.  This approach resonates strongly with me since in my view writing is an act of public engagement.

The late Adrian Mitchell said that, “Most people ignore most poetry because most poetry ignores most people.”  Poetry is far too often dismissed as obscure texts for a specialist audience that is accessible only to those with access to the code that unlocks it. Poetry can, and should, however engage with the key issues of our time, ask difficult questions, and challenge the reader to think about what is happening in the world.

The poet William Carlos Williams held that poetry was, ‘equipment for living, a necessary guide amid the bewilderments of life.’   It must, like all art, communicate with real life.  There is no good reason why poetry shouldn’t be an urgent, provocative response to issues such as austerity, war, racism, the climate emergency and the refugee crisis.  Precise poetry of this type can embody a crystallised truth and act as a catalyst into the process of political change.

There is obviously a strong political element in my own work.  There is, of course, a conception that this must preclude any aesthetic value which is in itself a way of prescribing what a poet can write about.  A poem should be judged solely on whether it has integrity and works as a poem.  Surely one of the functions of all art is to question the dominant narrative at a given point and give voice to the marginalised and the dispossessed.

In any society in conflict politics is part of everything to the extent that language itself is a political issue. So any attempt to constrain the dialogue between writer and reader is political.

An idea for a poem can be triggered by a phrase, a thought or a response to something I’ve seen or read.  It can then take a very long time to get from inception to completion and go through many drafts in the process.  I will often spend weeks, or months drafting and revising only to scrap everything except perhaps one or two lines that might be of use elsewhere.

Resolving the problem of expressing a complex thought in a way that resonates with the reader is part of both the exasperation and satisfaction of creating a poem. I find it quite easy to hold the poems I am working on in my head and revisit them whenever I have bit of free time. It’s often the case that the work gets done in those supposedly idle moments or during a long walk.  I finished the poem Backstop Blues while walking in the Donegal hills after several months of turning it over in my head and redrafting on paper. In the past the absence of a notebook would have been an issue but with a smart phone I was able to email the revisions to myself immediately.

Reading widely is central to the writing process and I usually have a combination of fiction, poetry and essays on the go.  I’m currently reading Pat Barker’s remarkable retelling of The Iliad, The Silence of the Girls, which puts Briseis at the centre of the epic. Barker’s WW1 Regeneration trilogy broke down the accepted narrative of that war to put the voiceless and marginalised to the fore and in her new novel she again strips away the glory and glamour to reveal the true cost of war borne by women and children to the extent that I suspect we will not read The Iliad in the same way again

I’m also reading Sinéad Morrissey’s collection On Balance which is every bit as inventive and original as her earlier collection Parrallax. Morrissey makes poetry from an eclectic range of subjects including politics and I return again and again to her poems which are perfectly constructed.

I’ve just finished Ahmet Altan’s collection of prison essays, I will never see the world again. Imprisoned in Erdogan’s Turkey on the ludicrous charge of sending subliminal messages in support of a coup Altan never loses his sense of humour, his humanity or his belief in the transformative power of literature. Anyone who cares about writing and freedom of expression should read these essays.

As for my current work, Political Poem #2 will appear in the anthology, ‘The Darg’ which will be launched as part of the Edinburgh book festival in August. New poems have recently appeared in the Glasgow Review of Books and The Poets’ Republic 7. I’m currently making the final revisions to six new poems that I will read as part of The Poets’ Republic Irish tour which will be in Derry in October.

Beyond that I will be retiring from my day job in September.  While I could then set up a formal work space and establish a new routine I suspect I’ll keep doing what I have always done since it has served me well down the years.

Paul Laughlin lives in Derry, Ireland.  He has written short fiction, pieces for radio and magazine articles.  He has published three collections of poetry, most recently Conflict Studies, New and Selected Poems (Lapwing Press).  He co-edited A Fistful of Pens, an anthology of poetry and short fiction and was contributing editor of Meeting the Challenge, a trade union publication dealing with economic issues. His poems have appeared in a number of anthologies including Field Day Review 9, Prairie Schooner’s Ireland Issue, Aimsir óg 2000 and The Harrowing of the Heart.  New work recently appeared in the Poets’ Republic 7 and the Glasgow Review of Books.