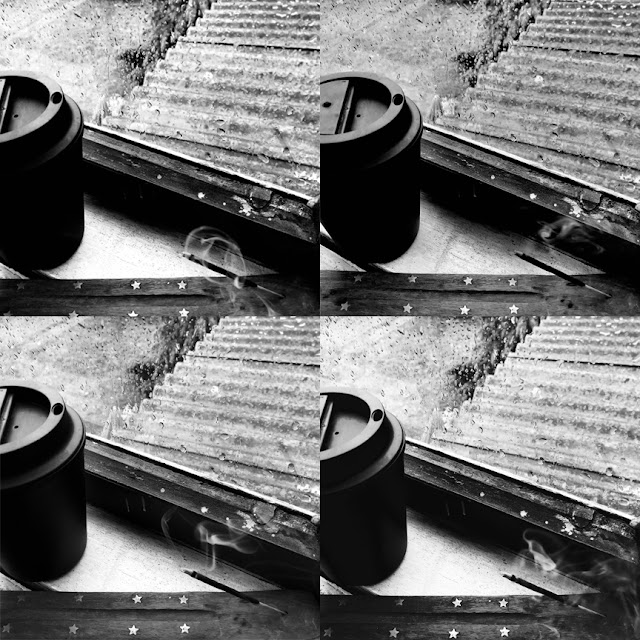 Initially, it’s a matter of the immaterial.
A nameless thing. A mood. A void. Or a maybe
carefully crafted avoidance
of full entry into the stream of life.
You’re on the outside
looking in. Inside, the body
speaks. The body is made of matter.
A few inversions and a twist
will probably be a good thing. Stretching
the limits of confined spaces, you find yourself
moving. Moving bodies of thought.
Movement reshapes matter, giving
space to thinking. You are not moved
necessarily by what is good, but rather
by what is true.

By Wednesday, it always
feels like its been a week of Wednesdays,
an amorphous inside-out time-lapse
continuum of middles, no beginning and no end,
a Mobius strip. Seamless. By Wednesday
it’s about substance. A seamless substance
that mimics biomimicry. Seamless,
like the skin of an amphibian, making
an imperceptible transition from one medium (air)
to another (water). In the background,
it’s “All Tomorrow's Parties” on repeat,
because it elevates you. It’s uplifting. It’s a mood.
And you take in the mountains, they uplift you too.
You take in the tree or skyscraper, or whatever
your view of the outside
happens to be. Wednesday
is just another way of saying
the in-between, the liminal space, the movement
between the one and the other,
the in-between between inside and outside.
You shake and rattle and lift the mood
with a few crystals and a mantra:
“more isn’t better, it’s just more.”

Then, once you get into the parabola of it,
you realize that thoughts are also matter
and that it’s only, but by no means simply,
a matter of being. You begin by being
with time, being with the time it takes to be
with the things that matter. The lavender
clouds at dusk drifting sideways against a peach sky.
This is time moving, and you sense it. Sensing
the way it effects your being by the way
you are moved. This is your perception.
It’s also a matter of taking time
and also a matter of making time.
The taking and the making are separate
but interrelated. For example, knowing
that you are thinking, knowing why you are crying
takes time, this is a kind of taking of time.
The time it takes to realize the parabola of a mood.
Making time always also involves giving
something up, foregoing, sacrifice, a giving up
in order to get, to get at something, and
what you’re getting at is taking shape,
it’s on the move, it’s moving. You go inside.
Giving up time for something that matters
to you, and you alone. It is solitary.
It is a good space for getting into
the singularity of who you are.

How you think about what you’re thinking about
matters. It is an unmediated process of watching
and listening to the unfolding, making what matters
count. Then, shaping it on the outside.
This is the shape of things.
A matter of making/sculpting.
A matter of listening/deleting/bending/remaking/stretching.
Chiseling out meaning from the dream. It’s both
at once, organic and contrived. It’s about getting
in and being able to give meaning, giving
it an unspoken name, then letting it float
downstream. I am not my thoughts,
you keep thinking. This is the way
you go about the making of something
that is, in reality, nothing.
It’s about solutions, problem solving.
How to say the thing you’re thinking
without depleting it’s dream meaning,
without giving it away? It is both
a saying and a not saying, both
a nothing and a something.
It’s a matter of not and a matter of is,
a matter of capturing a vanishing point.
It’s a field and a passing mood. It’s a matter of meta
and micro narratives. It’s a matter of dropping
the story line, getting quiet and waiting,
without projecting avatars of Self.
It’s a matter of making the most of this
“less is more”/soft focus process.
Eventually,
you learn to rattle and shake,
you learn to call it by incantation.
Calling it a calling.

Recalling something, some shape that was
mustard yellow or avocado green recalls
the felt sense of childhood, the feeling of being
in a place of learning, in a library, a place in which
you mattered because you could read,
you knew how, this was your gift!
You are gifted!
This was affirmed by a row of metallic gold stars
next to your name just for being
able to make meaning out of symbols and signs
and this mattered to you very very deeply,
because it let you know that inside you were good.
Believing you were good because you could read.
You’re a star!
Somewhere, deeply inside, you still believe
this to be true, at least the molecular level. After all,
you and the stars are composed
basically of the same matter. More or less.
Reading makes you feel good, and so you go on
reading. And it often begins in the reading,
you are shaped by it, moved beyond words,
by it’s alchemical process, funnelling your thoughts
and moods and feelings. Something takes shape
inside you when you read.

In the end it is a matter of your basic conditioning or,
more accurately, digging yourself out of it, carving,
getting around it, getting quiet enough to hear the wind
brush the forrest and the soft sound of light rain falling
on the leaves, getting quiet enough to encounter
the non-verbal, the timeless, the shadows
and the dead. You become more you
in the process. You’re saying hello
to your incubating visions, you’re moved
by the thought that maybe, in reality,
there really is no outside-
text. You nourish thoughts,
letting the unconscious flourish
and unfold into matter.
You straddle the divide between inside and outside.
You straddle the divide between knowing and not knowing.
But actually, to be perfectly honest,
it’s a bit of an abyss.

Razielle Aigen is a Montreal-born writer and artist with a B.A. in History and Contemporary Studies from Dalhousie/King’s University, and is an alumna of The Writer’s Studio at Simon Fraser University. Her poems and essays have appeared in Sewer Lid (forthcoming), Fresh Voices, Five:2:One, Synapse, écho!, Hinge, California Quarterly, and elsewhere. Website: razielleaigen.com Twitter: @ohthepoetry