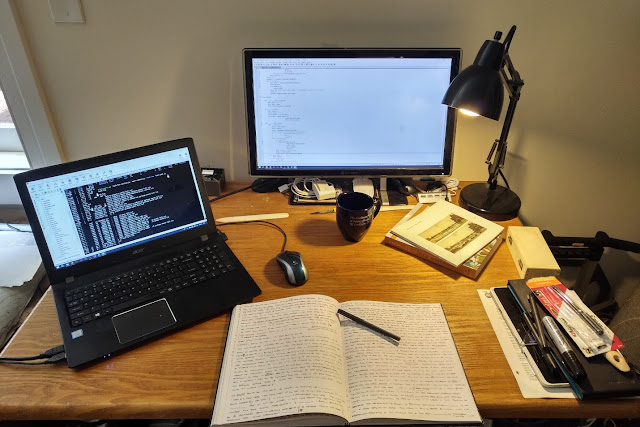 To those whose professional lives approached their apex in the 1980s, my workspace or general process might not seem so unfamiliar to those who held the position of a “Computer Operator.” Coffee in hand, I sit at a computer terminal, push the power button on a computer screen, the glow washing over me in the early morning light. The command prompt’s ever-ready cursor awaits input. The machine needs instructions.
In abstract terms, it’s not so different from the situation which any writer might experience: the perpetual problem of the “blank page,” the perpetual struggle to invent or reinvent objects which are, sometimes poems, sometimes fragments, sometimes doodles. At worst, nothing happens for a while, and the state never changes.
Often, when I use the word “computational” to describe the work I do, the listener or reader imagines some flashy platform or fully-fledged automated system completing my work for me. And sometimes that’s partially true: I send a Twitter bot out overnight to gather tweets which contain language such as “garbage” or “waste.” When I come to the console in the morning, I put the robot to sleep for a while and trawl through the night’s collection for interesting coincidences. One user, having spent a much larger-than-average amount of money on a garbage can, writes “i don't think it gets any more adult than this.”
In the 100,000+ lines captured, there’s an equal possibility that I won’t find anything of interest. The state does not change.
In an essay entitled “Poetry and Pleasure,” Jackson Mac Low talks about coming to a realization about his process that, after strict adherence to chance-based, deterministic methods, he came to identify as a poet who “engage[s] with contingency,”[1] opening all of his interests and abilities upon which to draw at any given moment. While I once thought of the computational as a way to abandon intention, authorship, and choice, I’ve come to identify more with Mac Low on this point as I too discovered my workaday writers’ approach to sitting down in the morning and attempting to invent, reinvent or discover word-objects with code on a screen. (I am, however, a subscriber to Brenda Hillman’s “holographic” method as it comes to transforming massive amounts of language into even quasi-finished writing.[2])
Perhaps Mac Low’s perspective offers me the thought that I’ll get as close as I can to a full-contact sport in the process of combing through computationally-sorted, or generated text and, using some “contingency” emerging at that time and place, pick out a word, phrase, or strange combination from the sifted resultant language that turns into some part of a work. Sometimes, I’m more like a fireworks technician having set up an elaborate, well-coordinated, and programmed display, set the process off only to generate some form of disappointment or, at worst, to discover that nothing happens. Or, it might be more apt to write that my process gets me closer to that of an amateur scientist playing at being a professional in a proper lab.
I once began a job talk (that anxiety-inducing invention of the academic interview) claiming that humans, despite baffling amounts of effort and capacity are, ultimately, bad at making choices. Though I avoid comparing my practice to any kind of economic or psychological study, depending on the kind of project I’m working on, I offload some at least decision-making authority to “the machine.” Admittedly, I now spend more time writing code than strictly “writing,” which is likely a sign that I’m automating or surrendering some greater amount of intention to the pure output of process, modeling authorial intent in the “self-executing” language of script or computer code.
But, as several other computational writers may point out, this difference in process—which can engage or create new forms—is certainly not unfamiliar to the writing mind. In an age that predated the digital era in which we find ourselves, William Carlos Williams wrote of the poem that it is, after all, “a small (or large) machine made out of words.”[3] And this machine, as noted by Robert Pinsky in an article on the classic computer game “Zork” operates on “speed and memory,” sharing the “discovery of large, manifold channels through a small, ordinary-looking or all but invisible aperture.”[4]
Though the aperture of the screen in front of me is by some standards not so narrow, is no less common looking than any other of many writers’ tools. And despite that my current language may not be as necessarily as recognizable, I begin the day typing as fast as I can, recalling the words.

Douglas Luman is a co-founder of Container, art director at Stillhouse Press, head researcher at appliedpoetics.org, a book designer, and digital human. He is an Assistant Professor of Computer Science at Allegheny College. His first book, The F Text, was released in fall 2017 on Inside the Castle.
[1] Mac Low, Jackson. “Poetry and Pleasure” in Thing of Beauty: New and Selected Poems. Ed. Anne Tardos. Berkeley: University of California Press (2008): xxxv.
[2] Hillman, Brenda. “The Holograph.” in Poets on Teaching. Ed. Joshua Marie Wilkinson. Iowa City: University of Iowa Press (2010): 110-113.
[3] Williams, William Carlos. Selected Essays of William Carlos Williams. New York: New Directions (1969): 256.
[4] Pinksy, Robert. “The Muse in the Machine: Or, the Poetics of Zork.” New York Times (19 March, 1995): BR3.
at August 15, 2019