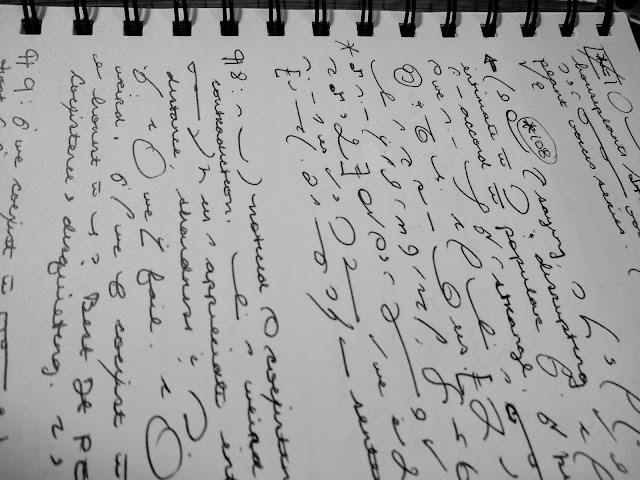 The kiskadees come at eight. Sometimes on the roof, often on the wooden pergola, they peel palmetto nuts. Their idea of peeling involves their forefathers’ method, refined over generations, for bashing lizards’ brains out. Obstreperous hammering resonates through the house. This is my awakening.
A kiskadee is about four inches tall with a knavish mask and fluorescent yellow breast.
~
This new morning, if it’s a good morning, is a moment in the middle of a long night.
An all-nighter kind of night. That’s what novel-making feels like when it’s really happening. The souped-up trembling of going on because I have to, because the characters’ desperation allows for nothing else. In such a crackling, concentrated night, nothing is real except the characters’ throbbing energy. Nothing is real except those who don’t exist. As in dreaming.
Those beings who are not beings (or are they?), they are the reasons for everything. Kenji, you were relentless.
If today should happen to be a moment in that dire night, the pages of some notebook will crackle and crinkle under lists. Lists of pros and cons (so you die, Kenji, so what?). Disordered lists of possibilities (so you don’t die, so what?). List of happenings as linear time would list them. Lists I hear in my head as conversations.
When the night has been very long, gone on perhaps for years, I hear them almost schizophrenically. With timbres. “I have a spiel. I have a stance to go with the spiel. It’s a stance like I’m conducting a minuet…” For god’s sake, Kenji. My editor asked: Do you ever just want to shake him?
Spinning lists into ink threads. Weaving them into a textured expanse that will fade into the background. Adding the prose feels like I imagine painting feels. Mixing up the colors, slashing or splashing colors or dribbling them onto the canvas of the plot. Painting over inevitable spills and misjudged proportions. Sometimes I do it in Gregg. A shorthand system of loops and lines dancing to phonemes. I turn to my computer when it’s time for detailing. Dabbing and stabbing words. Coaxing and caressing words one by one. Giving Kenji plenty of Backspace.
Palmettos snuggling the house sound like the ocean.
~
If today is not a moment in a moving night but in a gleaming day, it means a forced march through the desert.
Kenji’s desperation drove me on such blinding days as if I were a thirsty horse underneath him. For his sake I dared not stop. But every step seemed heavy, every consideration of a step threatened to burn us underfoot. An unhealthy too-awareness, as if my every move were tracked by an enormous spotlight that no one hung up overhead, brought on an overwhelming anxiety.
I shouldn’t have said no one hung it (at this point I’m doubting everything). I should’ve said it was the capitalist that contemporary cultures breed and feed in me. That minion, eager to be known as a professional, is desperate to sell her work, to have her dreams spotlit. But that base longing for attention isn’t Kenji’s desperation. It misses the point of novel-making.
In a too-bright moment of a day that carries on for years, when my situation is too visible to me, and everyone else, touchable everyones, along with tangible obligations, those I have and those I’m wishing for, seem to be breathing down my neck—I find myself unable to pull away from my computer even if my words aren’t ready for it yet. I make excuses: I’ll have to type it in sometime if anyone’s going to see it. But at this point, more often than not, to be seen is the last thing my shapeless jumble of desperate energies and mixed-up colors needs. My clinging to the computer, clicking and reloading, has nothing to do with people like Kenji.
Why this inconvenient compulsion?
Essays, excerpts, stories, novels, so many of my manuscripts hover in the charged ether of “for your consideration.” Have they been seen? Will they be seen? Will they sell? The identity-shifting heroine of Wilkie Collins’ No Name literally almost dies from the suspense of not yet knowing whether she counts as a member of society-at-large.
Meanwhile voices of invisible, nocturnal frogs tremble the whole island.
~
Every evening as I work at other things, I hope the following day will be a sliver of night.
Now that Kenji is a book with a beautiful cover, a proper spine, and a publisher’s colophon, the next desperate protagonist should have a better chance at being born in an unbroken all-nighter, no? No. Not-yet-knowing is a chronic condition.
As if to make matters worse, I’ve set myself a challenge: for each new project, a new prose style. This is one small way in which I like to celebrate difference. My new not-yet-a-novel has no protagonist at all.
~ ~ ~
Mandy-Suzanne Wong is the author of the award-winning fiction chapbook Awabi (Digging Press, 2019). Her novel Drafts of a Suicide Note (Regal House, 2019) was a finalist for the Permafrost Book Prize, a semifinalist for the Conium Review Book Prize, shortlisted for the Santa Fe Writers' Project Literary Award, awarded an honorable mention in the Leapfrog Press Fiction Contest, and nominated for the Foreword Indies Book Prize and PEN Open Book Award. She was also the 2018 winner of the Eyelands International Flash Fiction Competition. Her stories and essays appear in Entropy, Manqué, The Spectacle, Waccamaw, Chaleur, Quail Bell, The Hypocrite Reader, and elsewhere. She is a native of Bermuda.

Kenji Okada-Caines is the Bermudian protagonist of Drafts of a Suicide Note, which will be published by Regal House on 11 October 2019.