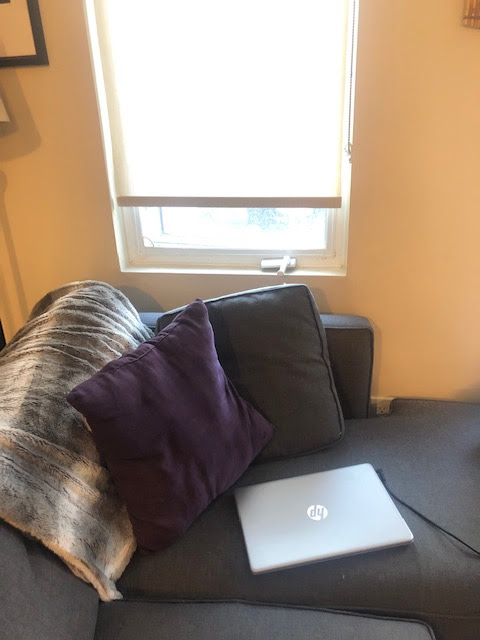 Since I work 9-5 and a weekday writing day would look like “go to work, come home, avoid eye contact with closed laptop while watching Netflix and petting dog,” I have opted for a Saturday. There’s still a lot of Netflix and dog-petting, but less avoidance of further screen time.

8:30 a.m. It’s my fiance’s turn to get up with the dog, but I’m inexplicably awake earlier, having had a weird dream about a fight in an abandoned Walmart. I’m not normally one for dream inspiration (would that it were so easy!) but something is sticking. Also, the dog is staring at me, willing me to get up and feed her breakfast, and her tail thumps against the wall are pretty loud.

8:35 a.m. I get up and feed her breakfast. We go for a walk around the neighbourhood and I try to keep my brain quiet as it fleshes out some of the backstory.

9 a.m. Coffee! And cinnamon rolls in the oven (the kind from a can where you have to brace for the pop). I cannot find my laptop anywhere and suspect it’s under the bed, so I creep around the house for a bit, trying not to wake my partner, but have to give up.

It’s analog time. I am not immune to the allure of fancy notebooks but I don’t fill them up very quickly, because for prose I write exclusively on the computer. Usually I go classic Moleskine but right now I’m working my way through a Leuchtturm that I got when we were in Berlin...two years ago. It’s a really nice notebook. I should write in it more.

9:45 a.m. I’m still scribbling notes when my partner gets up. He’s inquisitive about what I’m doing but I’m always a real jerk about The Process when I’m in it, so I mostly ignore him all morning until I run out of ideas.

10 a.m. He watches soccer. I read books and bum around the house.

10:30 a.m. I decide it’s finally time to download Scrivener. The project I’m working on, which has nothing to do with all the morning’s frantic scribbling, has gotten way too unwieldy for Microsoft Word. I don’t write in a very linear way and my approach to attempting a novel thus far has been “throw a dart at the board and start there.” So it’s gotten to be a bit of a mess, and thus, Scrivener. How hard could it be?

2 p.m. I am STILL working my way through this eternal Scrivener tutorial.

3 p.m. I need a break. This tutorial was written in 2006 and it’s charming enough, but I need something else. I take myself off to our neighbourhood Balzac’s and get a sparkling raspberry hibiscus lemonade (highly recommended!) and sit on the patio.

3:15 p.m. I’m alternating between reading Adrienne Gruber’s Buoyancy Control and Jane Alison’s Meander Spiral Explode, the latter being a fascinating approach to craft. I don’t have an MFA so I try to pick up what I can.

3:20 p.m. I keep getting distracted by the woman next to me, who is complaining volubly about a cop who left his car idling for twenty minutes while getting groceries. It is clear that she’s recently been dinged for something similar and her male companion is not particularly sympathetic. He’s saying something about car batteries and she is not having it.

3:50 p.m. I have written two terrible poems (again in the notebook)! This counts as a success even if they will never see the light of day.

4 p.m. Time to walk to the library with partner and puppy, where I do my weekly switch of returns and holds. Our branch is tiny and I am obsessed with the TPL’s hold system. I check my account every single day to see which books are on their way to me, and if I need to reorder my reading to align with which books I can’t renew. Partner and dog wait, dog worrying, outside, while I do a quick sneaky check to see if my own book is in yet (it’s supposed to be in this branch, for reasons I don’t understand and have some concerns about...can they tell I’m always here?), but it’s not. Later I’ll check the website and see that it’s lost!

5 p.m. More Scrivener tutorial. You can put reference images in there!

6 p.m. One journal rejection received. I update my spreadsheet, which I’ve been keeping since 2005. It’s colour-coded. There’s a lot of red, but the occasional patches of bright triumphant green. Personalized rejections are beige, because I don’t believe they exactly count as rejections.

7 p.m. Partner has made dinner. Afterwards we watch an episode of the Handmaid’s Tale and I get depressed.

9 p.m. Successfully loaded my work in progress onto Scrivener as a new project. Look at my cool new digital index cards! If only I knew what’s supposed to happen next in the plot!

9:30 p.m. I also throw in my notes from this morning before I forget how to read my own handwriting, which is a real risk. You can see the warning signs from my first grade report cards, but alas.

11 p.m. This counts as a very productive day. I will probably never have another useful dream again.

Originally from northern California, Laura Cok spent time in Grand Rapids, Michigan and Waterloo, Ontario before settling in Toronto, where she now lives. She holds an MA in English Literature from the University of Toronto, where she won the E.J. Pratt Poetry Medal and the University of Toronto Magazine alumni poetry contest. She has been previously published widely across Canada and works in corporate communications. Her first book, Doubter's Hymnal, was published by Mansfield Press in 2019.