A Day in My Writing Life : Karen Quevillon 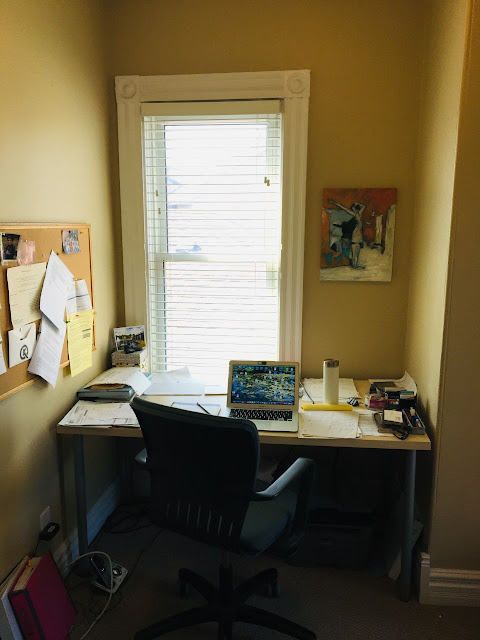 In brief
Hours: 6 or 7, sometimes less.
Words: Who’s counting? It really varies, but I’m happy if I get a chapter or two done.
To Drink: 1 latte, 1 brewed coffee, 1 cup of tea over the course of the day…plus water.
Go-to Software: MS Word, sometimes Scrivener.
Music? Yes! Usually instrumental, ambient, soundtracks or yoga music.

The first thing to tell you is that the writing days are few and far between. An entire day in which I have the luxury of doing nothing but write?? More often than not I snatch an hour or two after my day job is over, or before it gets going. These stolen hours have happened while riding public transit, on lunch breaks in a cafeteria or a college library (I work in colleges), in coffee shops and waiting rooms, playgyms and malls, in my kitchen while stirring a soup, in bed while nursing a cold, in front of the television when I’m supposed to be watching a movie with my children.

But I have had whole days of writing. So I’ll tell you about how they go. Before hunkering down to a project, I must get some the day’s necessities off my plate: dog fed, guinea pig fed, fish fed, children fed and to school, give the kitchen a once-over, perhaps a bill to pay or an email to write, perhaps a few minutes of meditation. I try not to let my chore list invade my writing day but if I don’t get a few items crossed off—aren’t lists wonderful!?—then I will not feel free to venture into storyland. During this preparatory phase my mind will wander ahead to the scene I’m drafting or re-drafting. I will make myself a latte using the espresso machine I bought for $5 at a yard sale in north Chicago. I do not rely on its steamer; I heat some milk on a pot on the stove. Accompany this with peanut butter on rye toast.

I must start my writing day sipping coffee or, more rarely, black tea with milk. Especially in the early drafts of a project I am very oral, sipping and nibbling on snacks, or on my fingers, as I generate ideas. Thank God I never tried smoking. At some point, though, the need to fuss extinguishes itself. The process is akin to entering a tunnel that transports me to a timeless land. Creative writing, for me, is like climbing out of my body. It is an escape from the here and now. If I happen to have scheduled an appointment that day, I will set an alarm to be sure I “awake” in time. I cannot trust myself to snap out of a storyworld on my own.

If I’m writing poetry, this will be done longhand, at least for the first draft. Typically it’s on scrap paper, then transposed to Word and tinkered with digitally. For prose, I rely on my little Mac laptop. When I’m editing a draft in a relatively polished state, I also make use of a binder with a printed copy of my manuscript. I mark things up on paper, make notes, add flags, then later go through it and fix things onscreen. Some of my writing day may involve research. (Or in some phases be only research.) I spend blocks of time researching—notetaking from a book I’ve found at the library, or dug up from my own collection—and then there are sporadic forays on Google and Wikipedia, to check random facts or look up a location. On any given day my browser’s search history would make for stand-up comedy.

At some point in the morning my little doggy will feel an overwhelming need for affection and jump onto my lap and paw at my arm until I massage his neck and ears. Having done that, he will try to settle in with his head on my forearm as I type. I put up with this for a while. He really is that cute. But not for too long. I stand up, he trots back to his bed, and I go for a shower and finally get dressed. Writing is the life! Look at this, 11 am and I am just getting dressed.

My writing day is interspersed with breaks like this, taken at natural junctures. I might weed the garden for a few minutes. Weeding is very effective for stimulating the creative juices and allowing the unconscious to continue its rambling. Walking is a wonder. If I leave a chapter or a poem that is causing me problems or falling a little flat and walk to my local park, often by the time I return to my desk something has been freed up. The project begins to soar again. Showering is my failsafe reset button.

By late afternoon my energy may be flagging. (I skipped over the part of the day where I forage in the fridge for lunch items and eat them while writing.) If I’m feeling spent, I stop writing and do something physical or mindless. Driving to pick up the kids from school, say, or hopping on Twitter, or making dinner. I try not to end up in situations at the end of a writing day where I need to rely on astute observations or engage with people in meaningful conversation. It takes time to re-enter the real world after wandering in my imagination.

I’m sure you know that it’s a magical thing, writing. Though I’ve stopped drafting words onto paper, aspects of the narrative or lines of the poem are still forming and reforming themselves inside me, like clouds on a domed horizon. The words or ideas may make themselves known as I am chopping vegetables, or watching an episode of The World’s Most Extraordinary Homes. Eventually the pressure builds enough that I return to my desk to put in what I think will be another thirty minutes, but which may turn into two or three more hours.

Such late day forays are often about changes to the scene or the chapter I’ve just drafted. Say, the refining of a character’s decision-making at a pivotal moment, or the recrafting of an exchange of dialogue. I take what the muse gives me. I do not count on any evening hours; I have learned that forcing myself to write one day makes for trouble the next. I also prefer to leave off in the middle of a scene, middle of a page, even mid-sentence. To be continued, to never quite say farewell.

Karen Quevillon’s fiction, nonfiction, and poetry has appeared in a variety of North American literary journals, including Grain Magazine, Geist Magazine, FreeFall, In/Words, Obra/Artifact, The Fieldstone Review, Woven Tale Press, Maple Tree Literary Supplement and many others. She is a contributor to the recent volumes When All Else Fails: Motherhood in Precarious Times and to the League of Canadian Poets’ collection Heartland: Poems for the Love of Trees. Her début novel, The Parasol Flower, is due on shelves in June of 2020. It is available for pre-order through Regal House Publishing.

Karen lives in Hamilton, Ontario with her two children and their small, yappy dog. She earned a PhD in Philosophy from Northwestern University and teaches writing and humanities courses at several Ontario colleges.