My writing day or thoughts that occupy my mind when I sit down to write : KA Rees 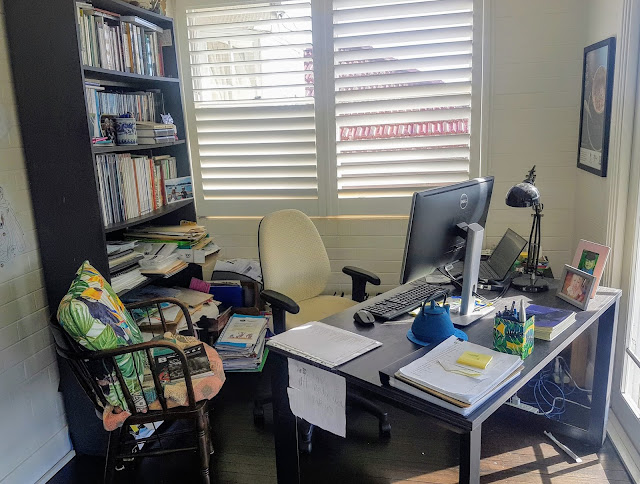 I have always wanted to write, but like most of us, have also needed to pay rent and afford to eat and pay bills, meaning, I have also spent a great deal of time not writing. I have, however, carried notebooks with me – still carry notebooks, and I would jot down observations on my way to and from work. These notes, scribblings, jottings, never really made it out of the notebook stage; they have been condemned to lodge in their spiral bound coffins, probably for all eternity.

Then I bought myself a laptop and carted that around on my daily commute and lugged it around on the weekends like an extra limb. The laptop afforded me the ability to write, not just the odd thought, but dangerously, thousands upon thousands of words in a multitude of different voices. They were basically streams of consciousness narration on the daily grind. What work I needed to prioritise for the boss, deadlines that were looming. Lack of energy to cook dinner – the lateness of the hour, the quotidian rule. Nothing, I thought, that could be constructed into a narrative. Nothing that had an arc or plot or used any other literary device to capture the attention of a potential reader. The only reader was me.

It was the writing of these thoughts, the process of it that I found enjoyable.

I also wrote the drafts of two novel manuscripts. One about a man who finds himself propelled through time waking with a different injury in each epoch and believing in each, he is dreaming his reality. What he can’t reconcile is the pain of his injuries with an unconscious state. Also, sentient computers and big data. The second manuscript was about bees.

Then I had children. The manuscripts were placed in a drawer. Actually, they are in piles on the third shelf behind my writing desk.

Why I write, and what I write, has changed over the time I’ve been writing. At the moment I think I write to explore. To explore the closed and cloistered time with babies and young children, but not necessarily through children themselves; they haven’t appeared in my writing in any great detail, but the sentiment is there: an amorphous thing, mood, atmosphere, that may at once be sustaining, but may also be confining. The in-betweenness that often comes with small children. That oh, what was I doing feeling when you were in the middle of three or four different chores involving vomit or faeces and the baby wakes for a feed, or the toddler has tripped over their feet and is having an Edvard Munch moment.

I’ve also found myself turning to the environment; how dependant we are on what surrounds us for nourishment. How we may feel grief when trees on the verge are chopped down, when the ground is dug up, when we pave paradise to put up a parking lot. Joni Mitchell’s iconic song about environmental and emotional loss, purportedly written whilst she was in Hawii and lamenting the destruction of a paradise being ‘chewed up,’ as she saw it and replaced with concrete. As Mitchell has sung her song over the years this sense of loss was being replicated from community to community, suburb to suburb. And now we’re on the verge of catastrophic climate change.

Here, in Australia, this whole of environment change also masks something insidious: destruction of a previous way of life. A way of living that has been, and continues to be, dismissed as irrelevant, criticised for being ‘uncivilised’ and often erased from the history books. Living as I do on Aboriginal land; on unceded territory I often find myself wondering about the lies, the deceit that has been perpetuated to build these suburban communities where most of the population now lives. The displacement of many peoples, of families and groups, whole cultures—has been a true loss of stewardship. In the Australian context we replaced custodianship with Terra Nullius, a legal void that rendered the land vacant and ripe for the taking.

This loss is also the foundation of resistance—Mabo and Wik. Reintroduction of languages led by grass roots organisations often guided by First Nation writers, artists and activists bearing witness to the injustices of their times and retranscribing, retelling, remaking and making their own stories for future generations. There’s an insistence here, that the myths told in settler narration are just that.

These are some of the thoughts that occupy my mind when I sit down to write.

My life with two young children is quite stagnant. When the kids were babies – and mine have only just come out of the baby / toddler phase, I pushed myself to write; to structure writing into my day, but that’s not the way of things with small children. There is no planning, only response: the baby won’t sleep, the toddler is having a tantrum while the baby sleeps; no writing for you! The kind of thing where, as most parents know, you struggle to figure out how to have a shower, or to listen to your own thoughts because you can’t hear them over the 747 aircraft worth of noise being generated by two sets of small lungs, let alone find chunks of time to string coherent sentences together.

Despite that, or maybe because of it, I managed to get short fiction written. And poetry. It was such a relief! Even though I was exhausted—and the exhaustion went way beyond the physical; I think I was existentially exhausted too—I still had some mental capacity left over to create. And that was amazing to me. Whereas the day jobs I had, often contracts, just left me drained and void. I didn’t want to create when I’d just spent the previous nine hours responding to email requests. A lot of the work I did appeared to be make-work. How is this necessary? Why is it relevant? But you do it. Everything comes down to a paycheck. So you do it. You are grateful for your job. You must be grateful.

I spend some time in my day thinking about lack of time, and how it was ever thus. Those daily routines of stupidly famous writers include a suspicious lack of a day job and an absence of caring for children, but they also include vigorous walks through the English countryside for three hours at a time and counting sixty coffee beans into a cup. So maybe my musings are OK. Maybe they are even necessary.

My kids are four and six now. The eldest is at school five days and the youngest goes to a part-time preschool programme. This allows me to string together some Magical Blocks of Time. I’m not one of those people who are able to write on a phone. I understand there are some writers who can get the bones and sometimes flesh of an idea down on a device, but that’s not me. Often, I  can’t even think about what I’m working on until I’m sitting down at a desk, distractions at a minimum (see kids). I work best with chunks of time, where I can be still and think, when I can gaze off into the middle distance and open the metaphorical door, then the words flow and I can get into something.

If I’ve managed to get an outline generated of a short story, or sketched some ideas down for a poem during the school day, then I can spend time revising it once the kids are in bed, usually during the 7:30-8:30 pm period, breaking for dinner and then another session later if I’m not falling asleep. I do try to work 10:00-11:00 pm or later. I find, unless I have a deadline, that timeslot is not my most productive. Often I use it for reading. I’m still figuring out how to get up in the morning before the two legged alarms come to wake me, but that’s a work in progress.

KA Rees writes poetry and short fiction. Her work has been included in Australian Poetry Journal, Australian Poetry Anthology, Cordite Poetry Review, We’ll Stand in that Place from Margaret River Press, Overland, Review of Australian Fiction and Yalobusha Review, among others. Forthcoming work includes Not Very Quiet and Flash Cove magazine. Kate has spent time as the Café Poet in Residence at the State Library of NSW, was shortlisted for the 2016 Judith Wright Poetry Prize, and was awarded the 2017 Barry Hannah Prize in Fiction. Kate is a 2019 Varuna fellowship holder for her manuscript of short fiction.
You can find her on Instagram @kateamber01 and Twitter @perniciouskate
at September 17, 2019