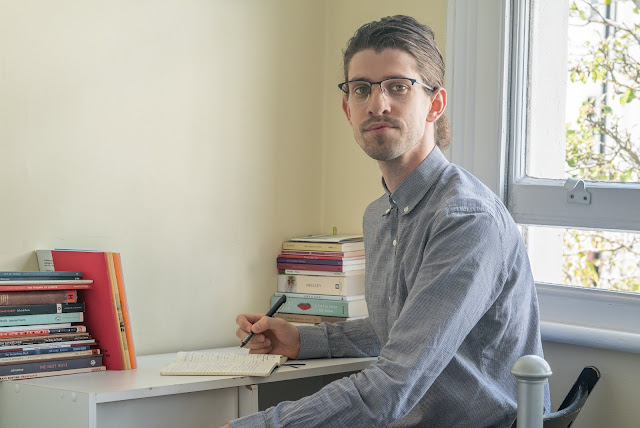 My typical writing day often involves a walk. It is said that Kant’s neighbours set their watches to his daily walk. But the timing of my walk is so capricious that if my neighbours were to set their watches to it, no two clocks would keep the same time, which is the same as saying that time itself would be eliminated, that day would turn to night, and that capitalism would collapse. This cannot be allowed: I admonish my neighbours to continue adhering to Greenwich mean and not to Torben mean time.

Following my walk, whenever that might be, and before I sit at desk, my spiritual weariness is so complete that I must always consume that meth of the masses: coffee. Yes, coffee, that triply foamed and sinful laxative that opens the gates for poetry (and keeps them open long enough for anxiety also to sneak through). Oh how many times I’ve tried to switch to green tea! You might say my typical writing day involves at least a few minutes of deliberation in front of a foil bag of Lavazza and a box of Yama Moto Yama sachets. Inevitably, the latter is relegated to the corridors of the afternoon.

My typical writing day often involves reading, especially if I want a meter in mind. I might, for example, read a canto or two of The Faerie Queene, so the iambs come out more easily. Reading and writing are so nearly one activity that if I go too long without the former—even a day is ‘too long’—the latter becomes an impossibility. To say that one can write without reading is to say that one can piss without drinking!

So where are we, I’ve walked, drunk black angst juice, read a few Spenserian stanzas, and I’m red to go, so I sit at cramped desk (photo enclosed) and quickly dash off as many poems as come to mind, perhaps I’ll get through three or four today. I’ll condense them later, if any are worth editing. But what am I writing about? Well, I’m working on a bit of a book you see… therefore, my subject matter is like the matter of a criminal investigation: I can’t discuss it!

What is coffee but a tunnel from which the muse emerges, and, within that vein, what more is music? Which isn’t to say that music—like Tim Hortons for a dollar.twentyfive—is cheap drugs. Still sometimes when I flag, I let fall the needle into the first groove of a record; no, that’s too poetic—I play my Spotify through a cheap pair of earbuds. These instrumentals keep the rhythm going. I will let you in on one secret: Tim Hecker’s albums lend themselves to some truly 21st century rhythms. And his ilk. It is said that Hart Crane would play jazz in the background. As much didn’t interfere with his pentameter, but enhanced it. Music, like a cup of coffee, is original energy distilled; language is the human superstructure. They do not interfere with one another, but coexist in harmony. Together, they are a two-part harmony. Hauntologically, the music is only a trace in the final product—it leaves a charged silence, which is the same as saying…

…ah! sorry, all that metaphysics must’ve put me to sleep! Which, right, yes, my nap! My daily nap! How could I ever write without that extra thirty minutes of sleep mid-session? Some might call it procrastination. I kiss my teeth at them. For every minute I sleep, I work two extra minutes in the afternoon and evening.

At last, after my resources and recourses are exhausted, my writing day always involves perseverance. Each day of writing is the easiest thing to delay or altogether abandon. Au fond the ideas come neither from coffee nor from music, but from the rote pressing of finger to MacBook Pro key, and again again again, until there is a full poem or a full blog post. My typical writing day is a series of episodes of giving up, and beginning again.

Torben Robertson is a Canadian poet and bookseller living in London, England.